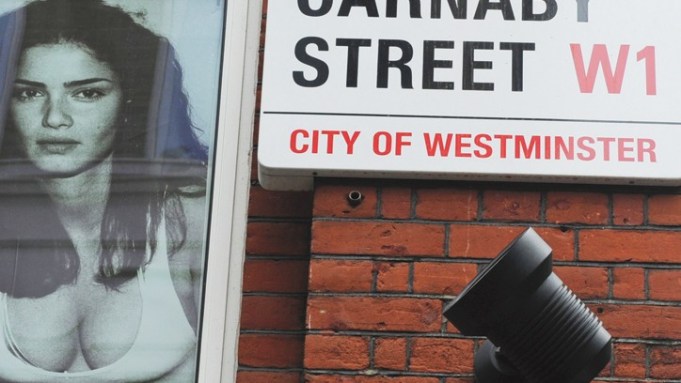 LONDON — Denim labels that flocked to Carnaby Street in recent years are finding the area is proving resilient in difficult times.

Carnaby has transformed itself into a mecca for denim and streetwear brands in recent years, welcoming such labels as Hilfiger Denim, Boss Orange, Diesel, Pepe, Lee, Levi’s and Wrangler. Swedish denim and streetwear label WeSC was the most recent arrival, opening its first store in the U.K. in March.

Many of these brands opened at a time when London retail was booming, but the situation has changed. The British Retail Consortium’s March survey found consumer confidence had reached its lowest level since 2004. But during the same month, the London Retail Consortium said sales in central London had risen 5.1 percent and Carnaby’s denim players say business is still moving.

“It’s as busy as it ever was,” said Pablo Sueiras, U.K. head of retail at Diesel, which has separate men’s and women’s stores on the street.

Sueiras said the label’s two Carnaby Street stores were designed primarily to serve as beacons for the brand’s image. Sueiras said sales at the stores “have been growing year on year for a long time.”

Simon Quayle, director of Shaftesbury Plc — the company that owns and manages the majority of the property on the street — said while Carnaby isn’t “exempt” from current economic conditions, its level of footfall has been consistent.

“Probably more important are [the street’s] conversion rates,” said Quayle, referring to the measure of how many of those browsing on the street go on to make a purchase. “We believe they are significantly higher than other locations. We’re not high end, we have quite affordable fashion. The younger market isn’t as affected by the downturn, as they don’t have mortgages and fashion purchases are still high up on their list of priorities.”

That view is echoed by Mark Selvey, managing director of Lateralcorp, the U.K. distributor for WeSC, who said he expects his store to be 30 percent above the company’s original sales targets by the end of the year.

“I think the level of footfall will have fallen everywhere, but Carnaby Street’s heritage does add strength in a period of downturn,” said Selvey.

The street’s storied history dates back to its days as a hangout for Mods in Sixties London. This mystique has helped make Carnaby a stop for the increasing number of tourists who have streamed to Britain in recent months to capitalize on the weaker pound. Daniel Grieder, chief executive officer of Tommy Hilfiger Europe, said Hilfiger Denim’s unit on the street has seen a double-digit increase in same-store sales over the past year.

“I think Carnaby Street attracts a much wider audience due to its international reputation,” said Grieder. “At the moment, the weak pound… makes the destination attractive [to international shoppers].”

“The consumer is pretty much a mix of everyone,” said Moreton. “There’s a strong media presence and because of the strength of the euro we’ve picked up tourist sales.”

George Wallace, ceo at retail consultancy MHE Retail, agreed that the  combination of appealing to tourists and younger consumers had shielded the street from the effects of the downturn.

“The best place to be during the downturn is the young fashion zone, rather than the midmarket,” said Wallace. “Carnaby Street will be feeling a little bit of a draft from the downturn, but it’s insulated well by its appeal to international visitors… and its focus on young fashion.”

Quayle said Shaftesbury continually strives to keep the mix of stores compelling for consumers and retailers in the current environment, explaining denim naturally features prominently as “it’s such a big part of young fashion.”

“It’s important that we maintain the area’s vibrancy by selecting the right concepts to trade here… and by attracting exciting pop-up stores, exhibitions and events,” said Quayle.

Recently, Shaftesbury gave the London College of Fashion a unit on Broadwick Street, a street off Carnaby Street, free of charge for six months, in which to exhibit students’ work. Quayle said the unit is vacant while Shaftesbury finds a retailer suitable for the space.

“We’d never put anybody in there who we don’t think will make a success of it,” he said.

To maintain the mix of major brands and independent stores on the street, Shaftesbury continues to offer a range of rents on Carnaby and in the 12 streets surrounding the area, which it also manages. While rental prices for units on Carnaby have “increased steadily but at a sustainable rate,” Quayle said, the company offers lower rents to independent boutiques setting up shop in the smaller surrounding streets. The highest rental rate on Carnaby is 360 pounds, or $550 per square foot at current exchange, while rates in Kingly Court, a three-story mall set around a shaded courtyard off Carnaby, start at 25 pounds, or $38 per square foot, with contracts as short as a year. Those units are designed to appeal to smaller, emerging retailers, such as vintage stores and young fashion brands.

“There still is a lot of interest [among independent retailers],” said Quayle. “I think what’s important is the flexibility — they don’t have to be tied up to a five-year lease.”

Hilfiger’s Grieder said he believes the mix of stores is vital to the street’s performance, “even if you have to lose some tail-end customers that aren’t performing well.”

“You can take a little bit more risk experimenting with a store [on Carnaby Street],” said Grieder, adding that Hilfiger Denim had in the past installed interactive windows in its store, which allowed customers to draw designs on a touch screen.

Sueiras at Diesel also said the street’s quirky atmosphere, and its location off the main shopping drags of Oxford and Regent Street allowed the company to be more experimental with its shop fits. Both Diesel stores are currently clad in plywood designed to look like giant boom boxes to mark the launch of Diesel’s radio station, Diesel U Music.

“It’s high visibility,” said Sueiras. “It’s not about having a big space, it’s about doing quirky, off-the-wall things. The landlords are very mindful of  creating something unique.”

In a further bid to gain control of the street’s retail mix, Shaftesbury recently acquired the lease on space that had been a Whittards tea shop on Carnaby Street. Quayle said demand for the unit — the only free space on Carnaby — is strong and the company is speaking to international and British brands. Quayle said he would consider another denim brand for the space “if it was the right caliber or [offered] a new concept for the U.K.”

“I think [Carnaby Street] really is a U.K. enigma, in the fact that it has so much heritage,” said Lee’s Moreton. “It’s as relevant now as it’s always been.”