The Barcelona show introduced sustainable novelties, such as new takes on knit denim and super-stretch fabrics. 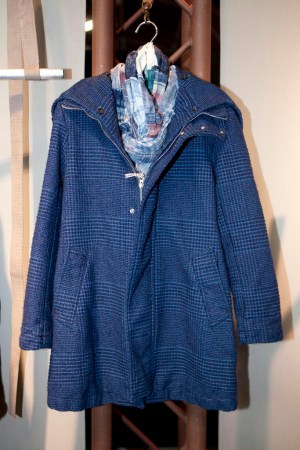 BARCELONA — Buyers attending Denim Première Vision were focused on innovative trends to help propel jeans back into the fashion spotlight and sustainability options to make the industry a better steward of the planet.

The show — held last month at the Montjuïc exhibition center here and now billed without the “by” previously in its name — supplied new takes on knit and stretch denim, with an emphasis on comfort.

Despite a challenging market just now showing some early signs of recovery, the mood was optimistic among industry players at the show. Euromonitor International reported that jeans sales in the U.S. dropped 2.7 percent and the super-premium category declined 9.3 percent in 2014, while Europe showed tangible signs of improvement, with an increase of 2.1 percent overall and 4.2 percent in super-premium.

The number of European brands that showcased denim on their runways recently — including Chloé and Balmain — emphasized the renewed importance of the fabric in today’s luxury market.

A new generation of labels such as Marques Almeida and Faustine Steinmetz are also using denim in new ways.

“It is exciting to see denim has been celebrated so much,” said Darwin Brucker, senior designer at Abercrombie & Fitch Co.

Trends observed at the fair included the flare cut and a color palette for fall 2016 in shades of gray, green-cast, red-cast and washed-down black.

“Sustainability is not so much about yarns, but also the chemical piece. [Exhibitors here] are talking about the bigger picture,” said a buyer for a premium American brand, who cited Orta Anadolu’s collaboration with Garmon Chemicals and Fashion on the GreenScreen methodology as examples.

Orta hosted a seminar to present its collaboration with Garmon on implementing the hazard screening method in the textile sector. GreenScreen was developed by the U.S. nongovernmental organization Clean Production Action to employ greener and safer chemicals. Various players in other industries, such as Hewlett-Packard and Sony, have already adopted the methodology.

Orta also showcased its new Vegan Denim range, a collection using vegetable and natural dyestuffs. It claimed the process has never before been applied industry-wide.

The company is set to open this month a 1,076-square-foot Orta Lab in New York’s East Village, where it will present its collections as well as collaborations with artists and book publishers.

“There is more emphasis on sustainable initiatives this season,” noted Rachel Mallinson, denim buyer at Topshop. “We are continuing to look at premium selvedge fabrics.”

Istanbul-based Çalik Denim presented “Oxygene,” a fabric that can be treated more quickly than traditional denim. Additionally, it is soft to the touch and retains its shiny look after treatment even though no resins are used.

“When you take the [Oxygene-treated] fabrics to the laundry, whatever treatment you want to do, you make it in half the time, getting the same result. It saves on water, chemicals and time. At the moment, it’s only 20 percent of the collection, but it can be 100 percent [down the road],” said Çalik’s product development manager Ali Tekin.

Enrique Silla, president of Jeanologia, called it a “revolution.”

“They created the perfect base for the washing technology — the fabric that is perfect for laser, ozone and e-flow applications. In the next Denim Première Vision edition, we’ll see every weaver doing the same,” he predicted.

“The only problem with knit denim so far [is] it was already giving comfort and performance, but it was impossible to achieve the vintage, authentic look,” he explained. “Today, we incorporate [Jeanologia’s] technology Light Scraper to engrave slubs and crosshatch into knit indigo. It gives the component that was missing.”

The Valencia, Spain-based producer of eco-friendly finishing equipment and technology for denim and other textiles presented Blue Technology, an exhibit showcasing vintage objects from weavers and antique garments.

Comfort technologies proliferated at the vast show as well.

“[It’s all about] comfort stretch and finishing, moving away from the high-shine coating and giving stretch an authentic character, with new shades, more subtle, not so saturated,” said Balint Bognar, senior designer at John Varvatos.

Isko presented its bi-stretch line called Blue Skin that gives what it bills as 360-degree movement, a second skin with 3-D shaping and four-way holding-power performance. Meanwhile, Tavex showed its new E-360º and emphasized the stretch attribute by having a contortionist — wearing jeans — performing at its booth.

She noted a lot of Sixties and Seventies-inspired open-end constructions.

“You see it at Orta, Isko. It looks now that they are doing it in a light stretch fabric that feels lighter in weight; it’s beautiful. They have very nice color shades,” Don added. “It’s like the Levi’s’ Orange tab open-end, cheaper, student line in the Sixties and Seventies. Mills are replicating that. It’s really interesting for women.”

Also noteworthy, according to Don, was the Isko’s Scuba range.

“It’s like Neoprene. For fall it can be interesting — it has a slick hand-feel,” she said.

Don noticed, as well, a “really interesting knit denim, with fringe. It reminds me of Faustine Steinmetz’s [work]. It’s very wooly. That’s out there, it’s interesting to see if they are going to pick that up.”

Abercrombie & Fitch’s Brucker stressed the importance of communication when it comes to stretch for men.

“We don’t say, ‘Stretch is the most comfortable thing on earth.’ We rely on the touch and feel and trying on,” he explained. “There is no stigma anymore. It’s not about the fit either. It can be a wider-leg silhouette.”

Brucker added: “Denim is a stable part of the wardrobe. The trick is to get them to buy more than one pair. ”

About the green-cast that was omnipresent at the fair, he said: “If it’s done in an authentic way, the Seventies-inspired cast, almost turquoise — it can be salable.”

A buyer for a premium brand said he was interested in the chip-off, or washed-down, black at Isko.

“Typically, black can be very dull. There [it’s] a super contrast, very unisex,” she said.

“You have to be very slim to wear flare without looking terrible. It’s tricky,” agreed Namhee Lee, senior denim designer at Bershka. Lee said she looks for inspiration not from catwalks, but from blogs such as They All Hate Us.

Denim Première Vision was also a place of celebration as Martelli marked its 50th anniversary. The company, which began as a dry cleaning and re-tinting business, now treats and washes denim for major brands ranging from Diesel and Replay to Dolce & Gabbana and Versace.

The visitor count at the show was 4,131, down from 4,479 in May 2014. The organizers attributed the decline to the novelty factor of its debut in Barcelona last year. This session, 27 percent of visitors came from Spain, and buyers present included representatives from Levi’s, Gap, Banana Republic, Marc Jacobs and Gucci.

The show housed 97 exhibitors, versus 100 last May, including new entrants such as the Japanese weaver Nihonmenpu Textile and the Italian weaver Niggeler & Küpfer Textile.

Participating students from 14 schools worked on developing innovative, salable jeanswear collections. The winners are to be revealed on July 2 in Milan.

The next edition of Denim Première Vision is scheduled for Nov. 18 and 19 in Barcelona.