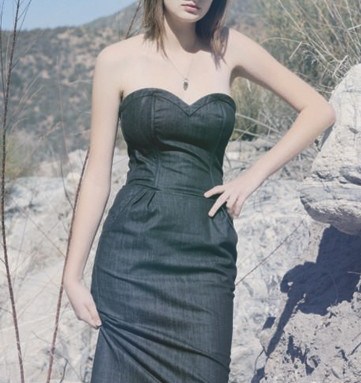 Finding themselves in the midst of one of the worst recessions in decades isn’t dissuading denim dreamers from charging headfirst into the storm.

Examples of other such brave souls throughout history can be found within seconds. Simply Google the phrase “famous companies that launched during recessions” and the results will include a list of now household names like General Electric, Burger King, Microsoft, Revlon and Fortune Magazine. Allstate insurance has been running TV ads boasting that it was created during the Great Depression.

Granted, none of those who have entered the apparel business in the last year expect to become the denim industry’s next Microsoft, but they’re not lacking the optimism and high-risk tolerance required to make a go of it. When asked if they’re crazy, most laugh first, then admit, “Yeah, probably a little.”

The harsh realities of the current environment are daunting and easily identifiable. Obtaining financing to start a business is difficult and the pool of available customers has dwindled substantially as slowing consumer spending has forced boutiques across the country to shut their doors. Those stores that are still standing are leery of untested labels and their customers are demanding special product for less money. Brands that are starting out are being forced to find ways to make these constraints work in their favor.

Erin McColl went from the Fashion Institute of Technology in New York to designing skirts and dresses for American Eagle Outfitters before heading to Los Angeles to work on denim lines like Yanuk, Imitation of Christ and Seven For All Mankind. Last year, she decided it was time to strike out on her own with Plaid, a denim and contemporary sportswear label launching for fall with wholesale prices of $75 to $100.

“I personally felt ready to start and I don’t think I realized how deep the recession would actually go at the time or else I probably wouldn’t have done it,” said McColl.

As economic conditions worsened, McColl was forced to change the way she approached her business. Tempering her ambition when it came to the collection was a crucial step. McColl’s experience with larger brands had instilled a belief that she should set out to offer a full and wide-ranging collection. She quickly realized “going full throttle” wasn’t possible or necessarily the best move. Items she was hearing on which store buyers were iffy, like corduroy, needed to be put on the sideline regardless of how she felt about them.

“Every piece has to be a must-have from this point forward until this lets up,” she said. “That is what has to happen, the hard edit, so people can go deeper into specific things.”

The forced self-editing has provided some mental relief, as well.

“It relaxes me into knowing what I have to do,” McColl said. “The hardest thing is having a million options.”

When it came to choosing fabric, McColl went with existing goods that had small or no minimums. It helps keep costs low and leaves little room for the types of surprises that come from being the first to use a new product.

“It’s less of a gamble because you are using things that are tried and true, they’re tested number-one hits for the mills,” said McColl. “You also know you’re not going to have an issue with the production of the denim.”

Use of in-stock fabric, coupled with producing the line in Los Angeles, means McColl can get Plaid into the hands of her customers quickly, sometimes in as little as 30 days. That degree of flexibility is proving invaluable.

“That’s everything to some stores right now,” she said, adding stores have been waiting longer to place orders.

McColl’s measure of success is low. Being in the right stores, even if it’s only one or two of them, getting sell-through and a reorder have to be counted as victories in this climate.

Chris Gilbert is employing strategies similar to McColl’s for the fall launch of Resin, which is looking to lay claim on the $100-to-$150 price range. Gilbert lived through the boom times of premium denim with Paper Denim & Cloth, and has spent the last two years on the sidelines developing Resin, while simultaneously watching the bottom drop out on the economy. From his perspective, the risk of a new venture outweighs the pain likely being experienced by the more established brands.

“My eyes are wide open,” said Gilbert of the retail and economic environment. “The greater challenge is having run a business for years and seeing that business drop by a dramatic percentage. Those problems are probably a lot more difficult than coming in on square one.”

Gilbert stressed the importance of controlling the variables within one’s control. He’s focused on keeping overhead low and, like McColl, has looked to get the most out of his fabric choices.

“You try and work smarter,” said Gilbert. “I find fabrics that have range where I can get multiple styles out of each one.”

Working with stores that have little or no available credit and are waiting until the last moment to place orders has been Gilbert’s biggest challenge. On-the-spot orders are a rarity these days, making it difficult to plan the line’s direction.

“It’s even more blind than it once was and it’s always been a certain amount of guesswork,” he said.
In most cases, Gilbert said the first question store buyers have is whether they can do returns or swap outs. New and established brands are hearing from retailers looking to sell goods on consignment. Brands with a solid footing may refuse working on consignment, but newcomers are finding they’ll have to work in ways they’d rather not in order to get in the stores they want.

Business conditions are making it more difficult for brands to get start-up capital, spelling more opportunity for brands entering the market now rather than later.

“The competition is a little slimmer,” said Gilbert. “Instead of launching with 20 new brands, there’s only four, so there are advantages as outrageous as it sounds.”

“It’s going to be better for shoppers,” said Suster. “It’s just going to be more edited and I think the brands that are going to stand out are the ones that have a great fit and a great product.”

Lia Fischer, head of sales and one of a quartet of denim veterans behind Civil Smith, said she and her partners have had to acknowledge that people are  spending less on clothing and doing business with stores will require concessions.

“What we’re all trying to do is support our stores in hopes they will support our brands,” said Fischer. “It’s difficult since we’re a new company, but everybody is going to have to bear the market right now, so we’re being as flexible as we can right now.”

Gilbert said he’s hearing the word “partnering” being thrown around these days, referring to a brand’s relationship with its suppliers and retail customers. Those partnerships are becoming more creative and based on trust as the economy limps along. That said, Gilbert and other start-ups believe the product will have to prove their case for survival.

“Am I crazy, I don’t think so,” said Gilbert. “There’s always opportunities if you respond to what’s going on around you and put a product out there that’s right.”