The label, synonymous with Cool Brittania, will sell at Harvey Nichols in Knightsbridge. 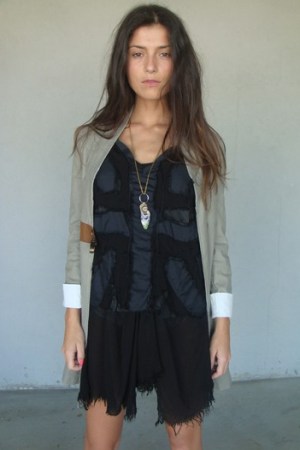 LONDON — Designer Desiree Mejer is back at work on Fake London after a three-year break spent consulting on fashion projects and golfing in her native Spain.

Mejer’s Fake London label launched in 1997 and became synonymous with Cool Britannia. “I had an offer I couldn’t refuse,” she said from behind a pair of dark sunglasses at the London showroom that’s stocked with the spring men’s and women’s collections.

She had long struggled with manufacturing the line in the U.K. and, despite a roster of clients such as Hugh Grant, Liam Gallagher and Gwen Stefani, eventually closed it in 2006.

Last year, Mejer struck a long-term licensing agreement with Italservices SpA and her first collection bowed for fall. Fabio Ferrio, brand director of Fake London, who convinced her to return to fashion, said his plan is to slowly restore Fake London to its glory days.

“We want to do this step by step and our priority is positioning rather than turnover,” Ferrio said. “This brand has so much potential, and now with manufacturing and distribution strength behind us, we can do what we want.”

The line will sell exclusively at Harvey Nichols in Knightsbridge for fall, and at independents, including Montgomery in Florence and Distractions in Aspen, Colo.

The spring collection has a holiday feel, “inspired by an English person who travels abroad,” Mejer said. It’s still signature Fake, with the bulldog logo, Union Jack design and parkas, even for warm weather, although Mejer said she’s toned down everything.

“Things are less logoed than they were before,” she said. “It’s more discreet and grown-up.”

Many of the pieces are hand-stitched and some even have fabric dollar bills sewn into the inside pockets of jackets.

In the women’s collection, there are cotton and silk dresses with raw-edged ruffles, linen gauze parkas trimmed with feathers, a distressed snug denim jacket with a Union Jack logo on the back and jackets embellished with fake jewels. Wholesale prices range from 34 euros, or $44.88, for a T-shirt to 368 euros, or $485.76, for a linen summer parka.