As the market for environmentally friendly DENIM GROWS, manufacturers are employing a widening variety of dyeing and finishing techniques in response to... 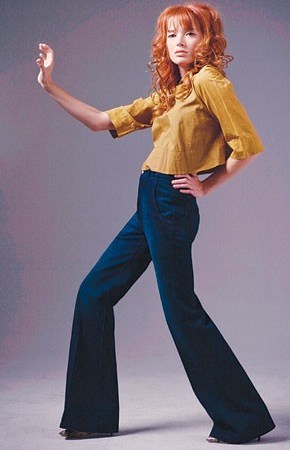 As the market for environmentally friendly denim grows, manufacturers are employing a widening variety of dyeing and finishing techniques in response to consumer demand.

For the early eco-friendly pioneers, the transformation has been rapid. Starr Dailey-Webb, a former model who started an all-organic line of denim called Aoki Jeans in 2004, recalled the difficulties in bringing her idea to life.

“When we started, I went through hell and high water to find organic cotton,” said Dailey-Webb, who is based in Atlanta.

Flash-forward to this year, when Dailey-Webb is introducing a stretch denim woven in Italy out of organic cotton that was grown and certified there.

“Now the doors are opened,” she said, noting she expects to ship 760,000 units this year to retailers including Kate and Gomi NY in New York and Devidolls and WeComeOne in London. “More people are jumping into the game. You can find more dyes. There is a lot more organic fabric out there.”

Aoki Jeans, Edun and Loomstate were among the first to adopt a mantra of sustainability for their businesses that rely solely on organic cotton. In the past year, the boutique brands have been joined by mainstream players such as Guess Inc., J Brand, Paige Premium Denim, Joe’s Jeans and Seven For All Mankind, all of whom have introduced organic cotton bottoms for the first time.

“Because almost everyone owns a pair of jeans, we have the opportunity to send a message and call out the organic,” said Larissa Noble, denim design director for Seven For All Mankind, the Los Angeles-based premium denim giant owned by VF Corp.

Yet, it’s not that easy going green. Denim may be one of the most heavily treated fabrics in the fashion world, requiring vast amounts of water and chemicals for washing, dyeing and finishing. Jeans makers can spend years on research and development to source organic cotton, natural dyes and enzymes, recycled buttons and other alternatives to the methods that have been used in the industry for decades.

Another issue is that organic cotton can cost between 20 and 50 percent more than conventionally grown cotton. Moreover, despite the increasing variety of organic cotton, the range isn’t as extensive as that of conventional cotton, designers said.

Several jeans companies are up for the task. Among the creative ways they are using organic materials are:

– Joe’s Jeans modified 10 core styles of its jeans, skirts and shorts by mixing in organic cotton and vegetable dyes in its summer collection that hit stores last month.

– Not content to rely primarily on vegetable dyes, Aoki Jeans recently added soy dyes because the easier-to-find soy tints use a third less water than the vegetable colorings.

– Del Forte Denim is testing natural enzymes like coffee and tea, as well as an herb-dyed denim from India.

– Ozone represents a viable alternative to bleach for Found Denim.

– This fall, Levi’s will introduce recycled cotton to its two-year-old eco line.

– Kasil plans to introduce organic cotton and less abrasive chemicals such as organic resin in next spring’s collection.

– Paige Premium Denim is making an eco statement by refusing to use pumice stone in its washes because it said the strip mines where the material is extracted ravage the earth’s surface.

“We have to start somewhere,” said Christina Brocato, director of product development at Paige Premium, based in Culver City, Calif. “It’s challenging in a lot of ways and we’re only getting better.”

The only way to improve is through trial and error. For this spring’s launch of a subbrand called Green Edition, James Cured by Seun figured out how to blend water molecules with rubber tree sap to produce a latex coating that can seal natural denim hues in fabric without the use of resin. Seeking to upgrade the natural coating for a less waxy and more flat and silky look, James learned to filter the latex at least seven times. Previously, it was filtered only once. The company also managed to work within the constraints of natural dyes, which can be difficult to replicate in multiple batches, by offering limited edition colors.

Natural dyes also posed challenges for Jason Ferro, founder and designer of Los Angeles’ Bread Denim. The palette was limited to the hues of the actual vegetables. Mixing the dyes with safe agents helped him concoct more funky colors, including plum, dirty pink and a blue evoking the shade of a hydrangea bloom. While Bread integrated Turkish organic cotton into its holiday 2006 offerings, the natural dyes were introduced this spring on organic cotton, sateen and Tencel. Ferro is also exploring ways to create vintage looks with chemical-free methods, by twisting the jeans in cold water to create a natural vein, for instance.

It seems a desire to do good is the primary driver behind denim companies’ move into sustainability. But while the media is buzzing loudly about global warming and organic products ranging from baby bibs to spa robes, some jeansmakers said they haven’t seen a corresponding increase in purchases of organic denim.

“However, we know that the consumer market in general is taking steps in that direction and we are always open to using new technology that would give us a premium denim product, as well as benefit the environment,” she said.

Helping the environment comes with higher labor and fabric costs, however. San Francisco-based Del Forte Denim chooses to hand-sand rather than sandblast jeans in order to curtail the number of gritty particles released in the air. It also prefers hydrogen-based lighteners over chlorine-based systems.

“The biggest challenge for us is keeping the cost down,” said founder and designer Tierra del Forte, noting the company is on track this year to ship 10,000 units wholesaling from $57 to $118. “We want our jeans to sit in stores that carry Citizens [of Humanity] and Paige and not be outrageously higher than them.”

Levi’s can capitalize on its volume and global network of factories in producing its eco line, which retails from $48 to $78 at stores such as J.C. Penney and Macy’s.

“We’re in the process of weaving a range of recycled materials into our products, from soy to bamboo and wood,” said Loreen Zakem, president of Levi’s wholesale business. “Our rigid jeans, which aren’t finished, and darker finished jeans are currently a big hit with denim aficionados and also have an environmental benefit because they require less water and chemical processing to produce.”

Conserving water is a big challenge for many designers. After all, some finishes require jeans to be washed in water as many as four times. For François Girbaud, who began his career in 1964, there is an urgency to test new techniques as energy and water conservation become paramount. The Paris-based jeans firm relies on a laser treatment that gives double-faced striped cotton a washed-out look and a soft and pliant feel, without a drop of water. Made in Italy, the lasered cotton will be offered this summer in the form of cropped overalls with dark brown leather trim and a $60.50 wholesale price.

“We need to save water now,” Girbaud said.

On the other hand, young designers like Found’s Lana Cretz and Sara Watson aren’t fond of laser.

“It’s a little too forced for our look,” Watson said, adding the uniform precision of the laser machine could make the jeans appear as if they were cut from a mold.

Instead, Cretz and Watson advocate the use of ozone, which is another way to create weathered, vintage and stonewashed finishes with minimal use of water. They aren’t alone. Del Forte Denim, Bread Denim and Kasil rank among those who asserted that not only is ozone a more powerful oxidizer than chlorine for bleaching, but it also requires less water and time.

Found offered two styles treated with ozone in its collection launched last year. Since then, it’s doubled the number to four. The advantages of using ozone are numerous, Cretz and Watson contended. In addition to muting the color of the denim without weakening the fabric, ozone reduces the number of other chemicals needed, eliminates a problem with pilling on the fabric and offers more variations within a color range when used on one type of denim.

“We are always open to using new technology that would give us a premium denim product, as well as benefit the environment,” Cretz said.

New technology doesn’t necessarily mean reliable tools, however. Paige Premium’s Brocato said the company has been developing laser and ozone as treatments for a while, but there are risks.

“Because we’re a bigger company, there isn’t enough equipment to sustain our production,” she said. “If we want this [eco movement] to be a big business, consistency is important.”

So are high standards, in the case of Seven For All Mankind. Last summer, the firm shipped its first batch of organic cotton in a dark blue wash with a subtle whisker effect. For this fall, it aimed for a vintage feel with rich, dark indigo roughed up with dirty whiskers and tears. Wholesaling from $95 and $125, all jeans treated with this particular wash, dubbed “California,” are made of organic cotton.

“Our washes are born out of the denim,” said denim design director Larissa Noble. “We shop for the denim. That’s what inspired the wash. This particular denim really washed down beautifully.”

At the end of the day, it all comes down to fashion.

“You can’t sacrifice the look of a product,” del Forte noted. “With these new developments, I don’t think we have to sacrifice anything.”