The garment-maker and laundry company showcased a collection of more than 100 rare vintage finds.

SAN BONIFACIO, Verona — Around 100 rare pieces of vintage denim were showcased inside a minimal space adjacent to the premises of garment-maker and laundry company Elleti Group in San Bonifacio, a small town on the outskirts of Verona.

On Wednesday night, the company founded in 1982 unveiled M.O.D.E., or Museum of Denim Elleti Group, gathering a range of denim industry heavyweights to celebrate the opening.

Dating as far back as the mid-18th century, denim garments on show were distressed, worn-out and damaged while retaining their silhouettes and bearing the signs of time, as well as the history of their wearer. For instance, a Forties baggy style was splashed with the “PW” lettering, which stood for “prisoner of war,” as the pants once belonged to a World War II prisoner.

In addition to a number of styles from Levi’s, Lee and Wrangler, which make up the majority of Elleti Group’s collection, smaller brands — some of which are no longer in business — were also represented. They include Los Angeles’ Stronghold, J.C. Penney-owned Big Mac, San Francisco-based Boss of the Road, as well as Japanese firms.

“The museum is a tribute to jeans through a hundred garments we collected over the years with the support of the experts of the sector. Garments with a soul and a story to tell,” said Luigi Lovato, president and chief executive officer of Elleti Group. 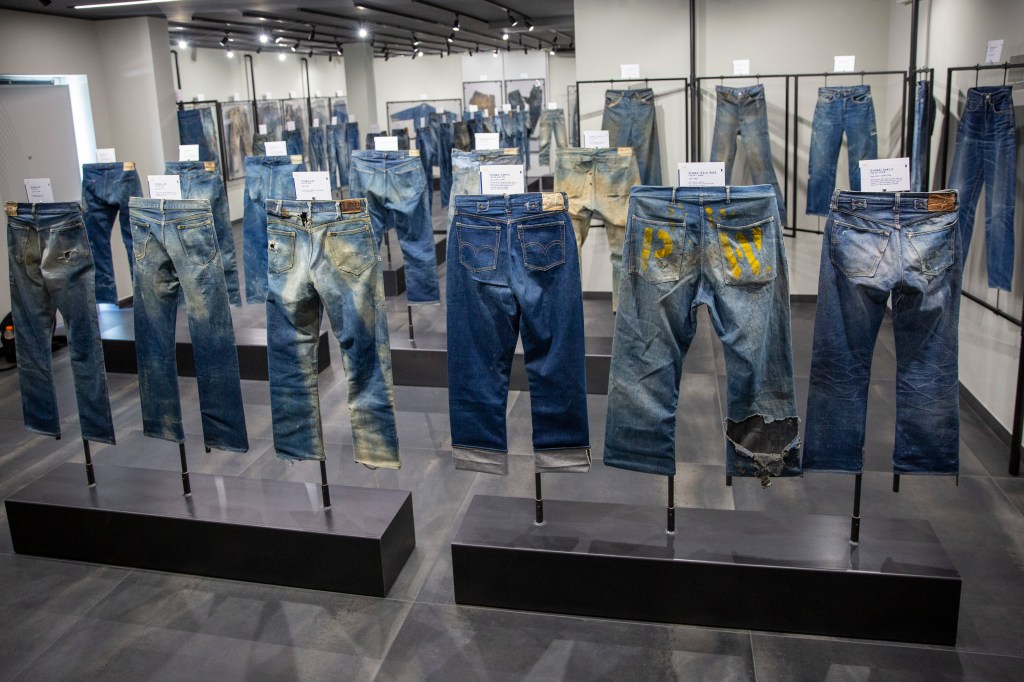 The group has also been busy setting up its own archive, called Stadium and also unveiled Wednesday night, which comprises 15,000 pieces that were developed over the 35 years in the business by the company’s research and development division. They included also garments from the Italy-based textile finishing firm Martelli, which was fully acquired by Elleti Group in 2016.

Stonewashed, selvage, color-dyed, bleached and distressed denim pants were organized in a tribune-like setting, hence the name of the space. The archive will provide a source of inspiration for designers and brands’ representatives visiting the factory.

“Vintage denim plays such an important role as it is a constant source of inspiration, every other time you look at a vintage piece you discover something new,” said Adriano Goldschmied, an industry veteran and founder of Genious Group and House of Gold creative agencies.

Along with other industry experts, Goldschmied participated in a roundtable on denim held before the museum and archive openings. “Vintage [denim] is the real reason why denim is so sexy,” echoed Matteo Sinigaglia, ceo of Italian denim brand Replay, referring to the fabric’s long lifecycle, which also allows customers to understand the value of “well-made products.” Alberto Candiani, the fourth-generation owner of the family-run Candiani Denim business, underscored today it’s common to recreate vintage looks through industrialized processes.

Matteo Marzotto, president of contemporary premium brand Dondup, which has recently unveiled the new D/Zero sustainable project teaming up with Candiani, said today’s customers are looking for “friendly — with the environment — fitting and fashionable denim pieces.”

Tony Tonnaer, founder of Amsterdam-based label Kings of Indigo, agreed, noting that the new generation of clients is focusing on quality rather than price, as interest for sustainable assets is gaining traction.

“Working on a global scale I see that sustainability is undoubtedly an essential topic, which the future of our industry depends on. But it’s only one of the aspects we should work on,” said Goldschmied, calling out fast-fashion players underpaying their workforce. “This industry requires a moral and overall vision of humanity, which are not only about water scarcity. I say stop to corporate initiatives that are only meant to drive profits. Conversely in order to provide effective solutions, [the industry] needs to work cohesively. It’s the only way,” he concluded.

“If you ask my father what sustainability stands for he would probably answer ‘efficiency,’” Candiani said. “If we’re not sustainable, we go out of business,” he added.

The opening was capped off by a cocktail reception and dinner.