Emily Current and Meritt Elliott are back to designing denim. They’re unveiling The Great Blue with half-a-dozen jean fits, as well as an array of jackets, shirts, dresses and overalls, all cut from denim. 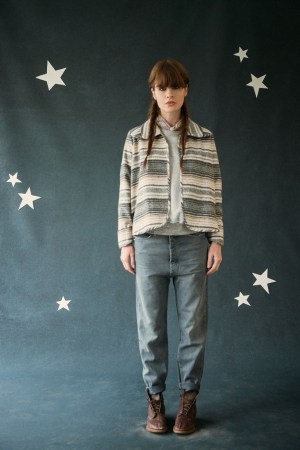 LOS ANGELES — Emily Current and Meritt Elliott are back to designing denim.

This story first appeared in the March 4, 2015 issue of WWD. Subscribe Today.

Three years after departing Current/Elliott, which they cofounded with Serge Azria, following the expiration of a non-compete clause that prohibited them from creating jeans, they’re unveiling The Great Blue with half-a-dozen jean fits, as well as an array of jackets, shirts, dresses and overalls, all cut from denim. Their venture complements their contemporary sportswear brand, The Great, that arrived in Barneys New York, Ron Herman, Nordstrom, Shopbop.com and some 80 specialty stores last month.

In The Great Blue, the stylists-turned-designers meld their fondness for vintage fashion and inspiration from “The Boxcar Children” book series with the current trend for distressed denim via 13 washes in shades of gray, black and dusty blue, aged with slight destruction.

“We design denim to live as a part of our bigger collection. It’s not a stand-alone business,” Current said. “It’s one of the unifying categories that broaden your collection and get you into more stores.”

For those expecting Elliott and Current to replicate the distressed boyfriend dungarees that put them on the map in 2008, the designers are surveying the denim market with a new point of view. In their inaugural fall collection, they’re cropping most of the jeans at the ankle, not just because they want to show off stylish shoes, but also because the shorter inseams work proportionally with the swingy jackets, boxy blouses and delicate eyelet tops from their sportswear that retails for between $95 and $1,395.

The six jean fits range from the button fly “dude slim” with a long boyish rise and skinny legs, to the “super-high-rise” that is tight and skinny with double-stitched side seams to elongate the legs, to the “nerd jeans” that sit snug through the hips before straightening into a stovepipe leg and kicking into a slight flare.

Reflecting the cost of using Japanese denim and handling the washes and manufacturing in Los Angeles, retail prices run from $265 to $325, in line with the pants in the sportswear grouping. Although declining to estimate sales for their 14-person company, which also counts Gap Inc. chief executive officer Art Peck as an investor and adviser, Current and Elliott take a creative approach seguing from sportswear to denim. Chambray and denim serve as textile alternatives for certain silhouettes, like with an embroidered silk peasant top and army green Japanese twill overalls. Plus, denim patches dredged in the same tinted, repaired wash as the overalls cover the elbows of a cream cable-knit cashmere sweater.

“Our denim world view includes jackets and shirts and dresses — unlikely things in denim,” Elliott said. “We like things that are just not five-pocket [jeans].”

What’s missing from The Great Blue is the ath-leisure trend, like jeggings and jogger pants that are standard for other denim companies. “Just because activewear denim is on trend, it doesn’t mean it fits with our brand,” said Current, noting that their branding revolves around casualness, Americana, playfulness and nostalgia.

Besides, Elliott added: “If it’s not part of your brand filter, you shouldn’t do it. In the long run, it’ll hurt you.”