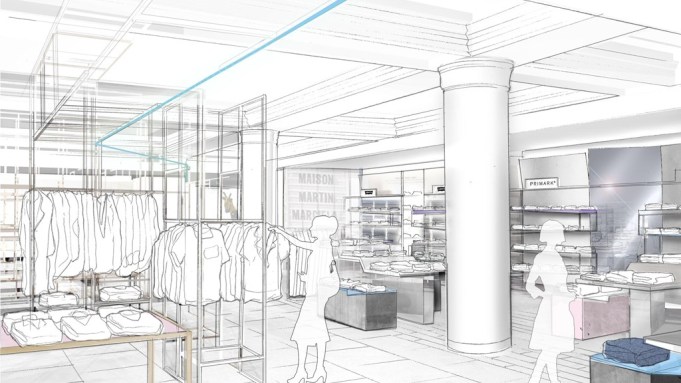 The retail landscape for denim in Europe — including the departmental assignments of many jeans lines — is changing quickly as the lines separating denim, contemporary and designer become harder to discern.

Innovations range from having a denim bar with a pop-up area, establishing a denim studio, changing the presentation on a daily basis or mixing denim with designer brands and even food.

Paris’ Galeries Lafayette is cooking up some major changes for fall, while London’s Selfridges is set to unveil its Denim Studio in June.

“We will carry the most comprehensive offer of denim worldwide, including in terms of price points, as we’ll have jeans starting from 11 pounds [or $17 at current exchange] to 11,000 pounds [or $17,000],” a spokeswoman for Selfridges said.

Printemps inaugurated its 2,700-square-foot denim floor last year, claiming to carry “the coolest denim assortment in Europe” and Le Bon Marché is working on some big moves for 2015.

Goldschmied, who founded jeans brand GoldSign, said the denim should be mixed with the nondenim selection.

He said retailers need to “respect the brands’ identities” and not separate their denim and nondenim components.

“Also, because this involves many [denim] brands [offering nondenim], it’s changing the industry in a deep way,” he said. “It’s kind of old school to go by category.”

Goldschmied praised the U.K.’s Selfridges and Harvey Nichols, and Lane Crawford in Hong Kong for their handling of the issue, as well as Italy’s Excelsior, which combines denim and other fashion with art and food. At Excelsior, brands including J Brand and Current/Elliott are displayed on the same floor as the likes of Givenchy and Valentino.

At Galeries Lafayette, where denim brands are currently on the fourth floor, denim will be incorporated into the contemporary fashion assortment on the second floor starting this fall.

“In terms of merchandising, we don’t believe in a ‘jeannerie’ anymore,” said Pascale Camart, head of women’s wear at Galeries Lafayette. “The customers are not looking for a specific denim brand anymore, but looking for a specific style. To us, all the brands must be merchandised by type of style. This is why, into our stores, we put Diesel near more rock ’n’ roll style brands.”

However, Galeries Lafayette currently provides a special accommodation for skinny jeans and the brands that specialize in them, including Cheap Monday, in its Slim Box area, where brands are mixed and their slim shapes merchandised by color range, from the coolest to the warmest shades.

“The ‘slim’ seems to be the only denim shape that will never go out of fashion.…Our main goal is to offer a wide offer of colors and prints at all prices,” Camart added.

Printemps takes a different tack, with premium denim lines including J Brand, Acne and Seven For All Mankind grouped together, with prices ranging from 180 to 250 euros, or $230 to $320.

According to Tancrède de Lalun, general merchandise manager for men’s and women’s apparel at Printemps, this type of layout is relevant because the denim customer is lost.

“She reads about leggings, treggings, boyfriend, flair, etc., in the magazines — she doesn’t know what to buy,” de Lalun said. “That’s why we simplify things for her. We edit the brands — for instance we only buy the best shapes in every brand such as Current/Elliott’s boyfriend and J Brand’s legging.”

Asked whether he would choose to display the rtw line from a denim brand alongside designers, he said it would more likely go somewhere near the denim assortment.

“So far, we haven’t felt the necessity to duplicate brands on both floors,” he said. “Acne is an exception. Their fashion offer is very legitimate in the designers’ space.”

A pop-up space in the middle of the denim floor gives Printemps some wiggle room to display designers’ brands that are not denim per se, but have some denim in their DNA. Currently, there is MM6 Maison Martin Margiela and Rag & Bone is coming in October. There are no plans to change the merchandising for now.

“We are 30 percent higher than our initial expectations for the first 12 months,” de Lalun declared, adding that the only change planned is the addition of new brands, including London’s MiH, Mother and 75 Faubourg, all added this season.

Meanwhile, on the Left Bank of Paris, Le Bon Marché is working to consolidate all its fashion — contemporary and designer — in the same building. There is currently a space devoted to denim, located on the footbridge between both entities, stocking premium lines including J Brand and Mother. The store will start stocking Acne and Faubourg 75 for fall.

There are some cases for which placement is debatable, acknowledged Jennifer Cuvillier, head of style at Le Bon Marché. Victoria Beckham Denim and R 13, both of which offer rtw, were placed in a multibrand area. “It made sense not to split their denim from nondenim,” she said. “It’s quite close to the denim section anyway. It seemed logical. The client’s path is easy.”

Each X Other is another example — “It is a lifestyle brand, with a denim and art component,” Cuvillier pointed out, and “cannot be treated just as a mono-product brand. It was first presented in a pop-up space.”

She didn’t comment on whether denim will still be in a dedicated space after the revamp, but added, “There will be denim for sure. We just don’t know yet how it will be displayed. We have seen denim bars again and again. We want to do something new.”

Specialty stores are also rethinking their presentations. Luisa Via Roma’s way consists in regrouping all denim, with two exceptions: Diesel Black Gold and J Brand have their own spaces. As for the rest of denim, it is presented by shape, color or brand.

“I tend to change it very often to keep it exciting,” said Ania Arcaini, women’s wear buyer for the Florence-based retailer. “And on the Web site, we have many different entries to get to a brand.”

All these experiments have a positive impact on the industry as it brings newness and interest, Goldschmied contented.

According to Printemps’ de Lalun, the extra purchase at the denim floor is not entry-price accessories, as he was expecting, but a second pair of denim.

“Recently, we had a client who left with eight pairs of jeans,” he added.