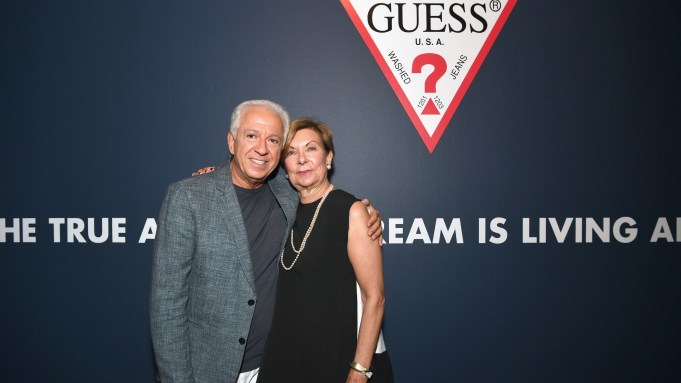 Press, models and stylists assembled Monday evening to hear the tale of Guess Inc.’s rise to global denim brand through the eyes of Paul Marciano.

The denim house’s storied trajectory runs parallel to — and proved the catalyst for — Los Angeles’ own rise in becoming a city that’s still known as the denim capital of the world, with the Marcianos bringing to the city stonewashed techniques and body-hugging jeans.

Marciano, who flew back Sunday from Italy, was on hand for the Fashion Institute of Design and Merchandising Museum and Galleries’ retrospective, titled “Guess: 35 Years and Still Dreaming.”

“When I walked in just an hour ago, I said, ‘Wow,’” Marciano told the crowd assembled at the museum for the preview. “Suddenly I had a flashback of a lot of things about the company.”

Marciano, who serves as Guess executive chairman and chief creative officer, said he couldn’t believe it had been 35 years since Guess’ founding.

The company has come a long way from its humble beginnings in downtown Los Angeles, not far from the FIDM museum, with two small offices at 1201 and 1203 Broadway. Those two numbers appeared on the sides of the company’s triangle logo.

“People are thinking, ‘Oh, this is a mystic thing. This is a number thing, black magic. What black magic? It was 1201 on the door [and] 1203. That’s it,” Marciano said to laughter from the crowd.

Visitors to the retrospective will receive a crash course on all things denim ranging from the stonewashing techniques to the pattern-making process and what goes into a single pair of jeans which, by the way, is one-and-a-half  yards of fabric, hundreds of feet of thread, one button, three zippers and four rivets. There’s also a timeline of major company milestones — from Marty McFly in “Back to the Future” donning Guess in 1985 to the denim house’s initial public offering in 1996 — along with separate rooms detailing Guess through the decades.

The company is now pushing significant store growth in places such as China and other parts of Asia along with Eastern Europe and the Middle East. At the end of the day, Marciano said, everything comes back to Los Angeles and the nerve center where the company is headquartered.

The exhibition opens to the public Wednesday and runs through July 8.

For More Coverage of Guess in WWD: