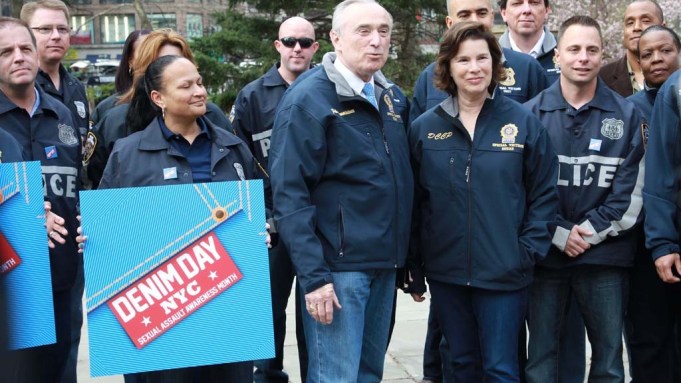 The fight against sexual violence moved forward in a sea of indigo on two coasts Wednesday.

From New York to Los Angeles, and thousands of points in between, wearing jeans took on meaning beyond casual comfort as supporters were asked to “make a social statement with your fashion statement” and wear jeans as a show of solidarity with the survivors of sexual assault and help deliver the message that any form of unwanted physical contact is not just unfashionable but criminal.

In New York, Police Commissioner William Bratton was joined by a large contingent of the city’s police force, which had traded in the blue of their uniforms for a lighter shade and more casual look.

They weren’t alone. In its largest philanthropic marketing effort in 33 years, Guess involved customers in more than 400 stores in the U.S. and also in Canada, where nonprofit organization Peace Over Violence had never sponsored Denim Day before.

Some 66,719 people pledged to wear jeans on Wednesday to show support for the annual event, which originated in 1999 after an Italian court overturned a rape conviction because the judges felt that, because the victim was wearing tight jeans, she must have helped her rapist remove her jeans and thereby given consent.

If Paul Marciano has his way, Denim Day also will be observed in Europe next year.

“It belongs in Italy,” he told the standing-room-only crowd at Guess headquarters. “We hope Mayor Garcetti and Chief Beck will be with us in Florence.”

Added Maurice Marciano: “The more noise we’re going to make about it, hopefully the better we’ll be able to protect the women, the kids, the victims of rape.”

After thanking the Marciano brothers in their native French, Garcetti saluted how they personified Los Angeles as a creative capital, a concept he’s promoting in his first year in office. “We take that creativity and we do something with it. It has a purpose and a passion,” he said. “Here in L.A., what we’ve been able to export through Denim Day has been nothing short of a worldwide movement.”

To underscore the consortium of creativity under one roof, musicians Aloe Blacc and Maya Jupiter jammed on stage, performing Blacc’s hit song “Wake Me Up” with Avicii and two other numbers, including one that featured a secret recording of Jupiter’s grandfather revealing the secret to true love.

After all, said Patti Giggans, executive director of Peace Over Violence and founder of Denim Day, afterward, “It’s really about love over violence.”

At a smaller gathering on the steps of City Hall in New York, Bratton told the lunchtime crowd, “I’m very proud of NYPD blue and today I’m proud to be wearing denim blue,” promising “vigorous investigation and prosecution” of the laws forbidding sexual and domestic violence. He promised departmental support to combat the notion that “because [women] wear a certain type of clothing, they’re entitled to be raped.”

Keeping these principles in mind and sharing them with young men and women needs to become an everyday pursuit, said Rosemonde Pierre-Louis, commissioner of the new Mayor’s Office to Combat Domestic Violence. “Every day should be Denim Day, not just because it’s comfortable to wear to work.”

Many in attendance were surprised to learn that, with reductions in crime in New York City in recent years, rape is the one indexed crime that has in fact increased in frequency, despite its status as the most unreported offense on the books. A survey by the Centers for Disease Control and Prevention found that one in two women and one in five men have experienced some form of sexual victimization, and that one in four women and one in six men experience sexual abuse before the age of 18.

With dozens of public officials and members of partner organizations on hand, Quentin Walcott, co-executive director of Connect, elicited cheers when he said, “It isn’t the clothes women and girls choose to wear that needs to change, but rather the belief system of those who objectify them and commit the acts of sexual violence that needs to change.”