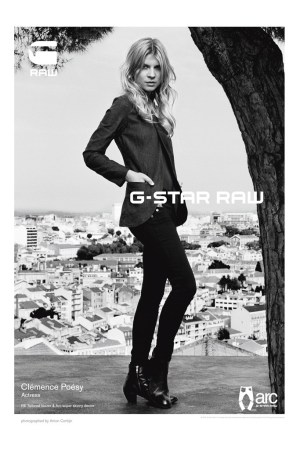 In its new spring campaign photographed by longtime collaborator Anton Corbijn, Poésy and Gallo model G-Star’s signature Arc jeans and streamlined tops high above the picturesque architecture of Lisbon. While Gallo is making a repeat appearance for G-Star after debuting in last fall’s ads, Poésy is being introduced as the new female face for the Dutch denim brand, succeeding past cover girls Liv Tyler and Gemma Arterton.

While Corbijn photographed Poésy and Gallo separately, G-Star said the thespians, who are based on opposite sides of the Atlantic Ocean, complement each other well. “We wanted to set off the effortless, natural beauty of Clémence with a rougher, tougher edge that is Vincent,” said Shubhankar Ray, G-Star’s global brand director. The third character in the ads was the port city of Lisbon, whose historic buildings replaced the nondescript walls that G-Star previously used as a backdrop for its photos.

With a bigger slice allocated for Web advertising in the U.S., this spring’s budget is larger than its spring 2011 counterpart. Although Ray declined to disclose a specific figure, he said online was “bumped up from virtually nothing to considerably something,” about half the amount of the investment in print.

Even with the Web’s growing influence, glossy magazines still play an important role, according to Ray. People generally search for specific — and already familiar — things on the Web, while print can help companies reach a new audience not already familiar with their brands, he said.

Online search, he said, “is so efficient. You never go outside what you’re looking for. Print still has a place in media. People can still discover things by accident that they’re not looking for.”

Poésy’s print ads will run in Style.com/Print, W, WWD, People StyleWatch, Nylon, V and Vs., while Gallo’s campaign will be published in Complex, Nylon Guys, Details, V Man, WWD Menswear, Surface and Essential Homme. Web sites that will display G-Star’s ads range from trend trackers such as Hypebeast.com and Complex Media Network to fashion hubs GQ.com and InStyle.com and mainstream marquees like NYTimes.com. Both the online and print ads will break in February, and hand-painted wallscapes will emerge on street corners in New York in April.

While G-Star is aiming big for its spring campaign, it’s targeting an experimental niche for its fashion presentations. Skipping New York Fashion Week next month, it’s staging a dance performance integrating its fall 2012 collection in Berlin as part of the Bread & Butter trade show, which starts today. This performance follows a pop-up fashion show that G-Star orchestrated in the window of its store on Beverly Hills’ Rodeo Drive last month.

“You saw one experiment in L.A., which is making our show really small,” Ray said. “What we’re trying in Berlin is another surprise. If it’s a big hit, we’d love to bring it to America.”