Monobrand store its second in Canada, although the the Amsterdam-based company does business at over 200 points of sale throughout the country. 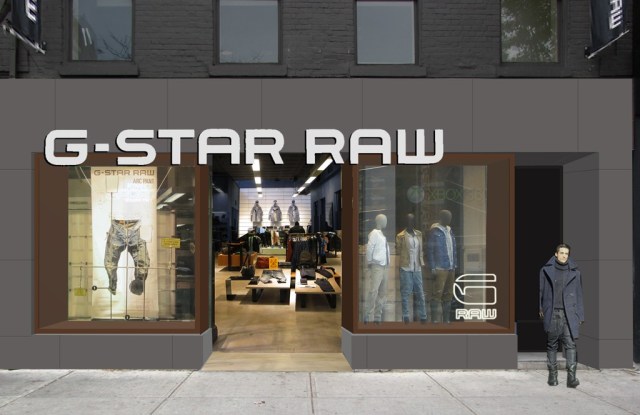 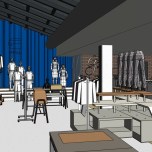 G-Star Raw is taking a big step north of the border.

The Amsterdam-based jeans brand this week is opening a 3,800-square-foot store at 328 Queen Street West in Toronto, only its second Canadian store and its 16th in North America.

The new Canadian store ranks as the second largest in North America for the company, behind the 4,500-square-foot Beverly Hills unit opened in December. That store, on Rodeo Drive, is one of only three company-owned monobrand stores under the G-Star banner, making Toronto the largest franchise operation on the continent.

G-Star, founded in 1989, does business at over 200 points of sale throughout Canada, but its only other store in the country is located more than 2,000 miles away in Edmonton, where it has maintained a franchise store for about five years.

Still, the market’s been good to the jeans brand. “We launched in Canada about the same time we did in the U.S.,” said Stuart Millar, chief executive officer for North America, “but it’s been a particularly good market for us. There’s a healthy specialty store market in which we’ve enjoyed solid penetration and they’re a bit more focused on brands and telling brand stories.”

Millar said that, despite having a population about one-ninth that of the U.S., the company’s sales in the Canadian market are about 60 percent of those of its more populous neighbor to the south. G-Star is privately held and doesn’t disclose sales figures, although global sales are reported to be above $1 billion.

“We’ve been very lucky in the Canadian market, with long-standing relationships and very good partners,” he said.

For the Toronto store, the franchise partner is Show Room, a 10,000-square-foot store located on the same street as the new G-Star unit. Show Room carries denim brands including G-Star, Diesel, True Religion and Antik.

G-Star generally has cast its lot with local franchise partners as it’s pursued a retail strategy that’s combined monobrand stores, like the two in Canada; the Q-Store concept, in which the majority of sales and stockkeeping units are G-Star’s but complementary brands are also stocked; the Q-System concept, which allows retailers to institute G-Star shops-in-shop using as little as 200 square feet of space, and more conventional wholesaler-retailer relationships.

The company works with four franchise partners in its 13 franchised U.S. stores. The Q-System is in place with 22 North American retailers, and another 10 shops are under development.

But the monobrand stores are gaining traction and there are plans to expand the number. The Rodeo Drive store brought the U.S. store count to 14, and the worldwide count to 300, and new units for the current year are confirmed for Miami and Boston with a goal of 50 U.S. stores by 2015, according to Millar. The brand hopes to reach a dozen stores in Canada by that time. Its next monobrand store in the market is planned for Montreal, with the opening likely to take place during the first quarter of 2013. As it has in Toronto and Edmonton, it expects to enter the new market with a separate, locally based franchisee. All stores but three — Rodeo Drive and two in its home market — are operated by franchisees.

The global retail total is expected to grow to about 750 by 2015, but Millar, like the company’s management in Amsterdam, is careful to keep its retail aspirations in check. “We’re not looking to become a retailer,” he said. “We’re big believers in providing retail solutions, as we’ve shown with the options like the Q-System. Most important to us is to have the brand in front of consumers in the best way possible.”

The company opened its largest flagship, a 7,300-square-foot unit in Hong Kong, in February.

Unlike many brands in the premium denim space, G-Star does the majority of its business — about 65 percent ­— in jeans and related apparel for men. “A 50-50 split would be optimal,” Millar said, “and we’d like to get there without any interruption of our growth in men’s.”

Although the entire collection revolves around the brand’s denim-driven personality, jeans account for just 40 percent of sales, with the remainder in slacks, shorts, knit and woven tops, casual skirts and dresses, outerwear, underwear and even a few hats and swimsuits, often represented in subgroups such as Raw Essentials and Laundry Army. Jeans retail for as much as $500, but Millar defines the core as $180 to $210 with a $150 opening price point.

G-Star this season has raised its marketing budget, with much of the increase devoted to U.S. Web advertising. Shubhankar Ray, G-Star’s global brand director, told WWD in January that the online expenditures “bumped up from virtually nothing to considerably something,” currently about half the size of its investment in print. The spring ad campaign, photographed by Anton Corbijn, features actors Clémence Poésy and Vincent Gallo in settings overlooking Lisbon, a city that’s home to two G-Star stores.