A denim brand lacking in heritage can compensate for it with the element of surprise. 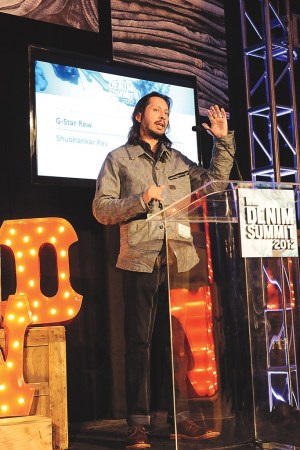 A denim brand lacking in heritage can compensate for it with the element of surprise.

Instead, G-Star’s attitude is that “you have to be surprising to get noticed.” Ray is responsible for creating new concepts for the denim brand to communicate worldwide and for finding ways to be distinctive in a market that’s populated by brands that arrived on the scene long before G-Star. In today’s fragmented market, media is no longer “fixed,” and has become multiplatform, with much of the action happening online.

G-Star, which distributes in 70 countries and had retail sales of $2.2 billion last year, gets its inspiration from modernist industrial design rather than fashion. Furniture, such as Le Corbusier chairs, architecture and industrial objects, are important influences. Ray said G-Star likes to combine old products in new ways.

“The more unexpected this combination, the more surprising the result,” he said. During his career, Ray has worked with brands such as Camper, Levi’s, Caterpillar and Sony. Working at Levi’s taught him how to add new elements to vintage products and modernize and reinvent an item that hadn’t changed very much since 1850.

At G-Star, he said, “Raw” has become a key ingredient of the company’s DNA. “Raw means uncut, unprocessed, pure,” he said, adding “original” and “authentic” to the definition.

In developing products, G-Star likes to combine street attitudes with luxury. For example, G-Star will fuse things like denim with silk, denim with cashmere and denim with leather. “We’re the modern, metropolitan denim brand,” he said.

A point of differentiation is its 3-D denim design, he said. In 1996, it launched a jean called Elwood, which fused motocross trousers with workwear jeans. Those pants evolved into the Arc pant, an architectural cut with a low crotch, straight hip and asymmetric tapered leg, which is its number-one style.

Another important trend is mass customization, “a contradiction in terms,” said Ray. “Even the mass market wants specialized products. They want it designed for him, but only for him.”

G-Star gained visibility by showing up in unconventional places. For example, the company exhibited at Tokyo Design Week, a bastion of furniture and household items, where it opened a pop-up gallery to display its designs and craftsmanship. It then brought the pop-up gallery to the Shanghai Expo, where it invited Liv Tyler to meet customers. It also exhibited at Bread & Butter in a big way, as well as New York Fashion Week.

G-Star brought in photographer Anton Corbijn to impart what Ray called a “gritty edge” to its celebrity-centered ad campaigns. “The way we work with celebrities is not for the sake of the celebrity but more for global visibility,” said Ray. The company’s models have ranged from Dennis Hopper at age 72 to Magnus Carlsen, who at age 19 was the world’s number-one-ranked chess player. Its spring campaign features Clémence Poésy and Vincent Gallo.

In addition to its wholesale distribution, G-Star has 300 stores, most of which are franchised. Only three units, including one on Rodeo Drive in Beverly Hills and two in its home market, are directly owned. In February, it opened its largest flagship in the world, a 7,300-square-foot unit in Hong Kong.