Getting Into the Act

By Jennifer Wiebking on May 10, 2011
View Slideshow 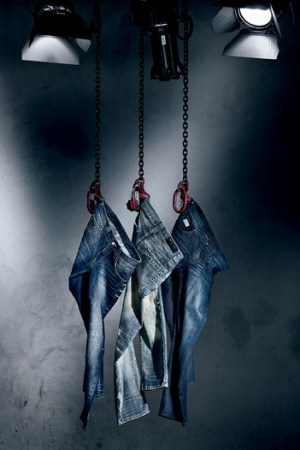 BERLIN — In an effort to bond with their customers, urban brands in Germany not closely associated with denim are now keying in on jeans.

Catering to their customers’ lifestyles, brands have recently introduced jeans collections, opened stores dedicated to the category and initiated point-of-sale activities tied to denim. According to fashion market research firm HML, German retailers sold 34.2 million pairs of women’s jeans in 2010. Jeans sales rose 4.6 percent compared with 2009, to 1.85 billion euros, or $2.45 billion. In 2010, jeans accounted for 28 percent of all women’s pants.

Shoppers at Porsche Design had been requesting pants to match the brand’s leather jackets for a while before the Stuttgart-based label, founded in 1972, finally took the plunge to launch a line of men’s and women’s jeans for fall. Porsche Design Group’s 2010 volume was more than 60 million euros, or nearly $80 million.

“Until four years ago, 60 percent of what we sold was luggage,” said Porsche Design Group’s chief executive officer, Jürgen Gessler. “This has changed. We make 60 percent of our sales in apparel now, and it will most likely stay this way, now that the category includes jeans.”

The line, a joint venture with Hamburg-based denim label Blessed & Cursed, retails between 290 and 450 euros, or $430 to $667 at current exchange, and includes models like a classic “Blue,” “Black,” or the distressed “Mechanic.”

“The Mechanic looks like its owner has been wearing these jeans while restoring his vintage Porsche,” said Roland Heiler, head designer and managing director of Porsche Design Studio.

But parts of the collection might also make it to the workplace. Porsche Design is hoping the “Casual Friday” model could become an office staple on a worker’s favorite day of the week. “Dress codes have shifted,” said Gessler. “Casual Fridays are becoming more important [in Germany].”

Tom Tailor Denim’s shoppers don’t think about what to wear in the office yet, as the brand targets 15-to-25-year-olds. Hamburg-based, the brand opened its first dedicated Denim flagship in Frankfurt last October and another door in Berlin’s bustling Hackesche Markt neighborhood in January.

Tom Tailor Denim, which accounted for 16 percent of Tom Tailor Group’s total 2010 sales of 347.7 million euros, or $461.7 million, gets deliveries every month, which is above average for a denim specialist in Germany, according to a spokeswoman for the brand. Jeans retail from 49.95 to 79.95 euros, or about $74 to $119. Moreover, the individual design of each store disguises that this is a fashion chain.

In Tom Tailor Denim’s Berlin branch, for example, the chaos of jeans and plaids scattered between air freight boxes, ironing boards, sewing machines and yarn spools calls to mind an old-fashioned denim mill, whereas the Frankfurt flagship looks like a rock band’s rehearsal room. There are also integrated shop front benches, a summer essential for Berlin’s independent retailers, and the idea is now spreading to bigger brands.

While Tom Tailor Denim welcomes its shoppers to enjoy the sun with them, Adidas Originals wants to be their friend on Facebook. Perhaps it’s the social network’s signature blue that is setting the denim mood for its fans, of which Adidas Originals has more than 8.5 million. These are fed with regular posts of Adidas Originals Blue’s jeans. The Herzogenaurach-based brand launched selected styles in January and for fall the Originals Denim range has been extended to four different fits for women (legging, slim, boyfriend and carrot), three for men (slim, modern carrot and standard regular fit), denim shirts, skirts and even a jumpsuit. Women’s jeans retail from 80 to 130 euros, or $119 to $193, while men’s jeans retail from 90 to 160 euros, or $133 to $237.

Cecil, a young fashion label, which is part of the Celle-based CBR-Holding, united shoppers and the brand by turning denim-phile with “We Love Denim,” its spring campaign. Besides POS-decor, “We Love Denim” included a sweepstakes and giveaways. Its jeans sell from 39.95 to 79.95 euros ($59 to $119), and volume hit 300 million euros ($398.4 million) last year.

Young fashion label Only, which is based in Denmark but has a strong presence in Germany, racked up 2010 sales of 95.3 million euros ($126.6 million). It opted to wow retailers with a Denim Tournee that literally took off. Instead of sending samples to each of the brand’s European showrooms, Only loaded up a private jet and landed in 14 locations within five days, selling the denim collection off the runway. The collection retails for 49 to 79 euros ($73 to $117).

“We spent two hours in every airport,” said Suzanne Burr, responsible for Only’s sales in Germany. “It’s a speedy process, but it’s also a nice denim expression. We want to be our customers’ best playmates.”