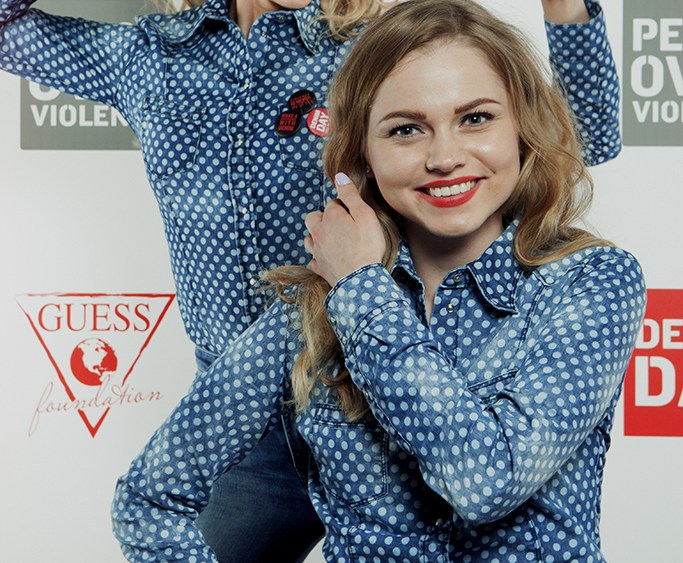 MILAN – “The problem of violence is ongoing, and present in many countries, but it affects women disproportionately,” Paul Marciano, chief executive officer and creative director of Guess Inc., told WWD.

The executive was in town for the Guess Foundation’s inaugural European Denim Day event, in partnership with The Circle Italia, a women’s organization connected to Oxfam, and Di.Re, a non-profit organization devoted to fighting all forms of sexual and domestic violence and supporting women in need.

Proceeds from the sale of a 20 euro (about $22) denim bag and a 15 euro ($16.6) keychain will also go to Di.Re, while a silent auction held in Milan on Thursday raised money through the sale of historic Guess campaign images and books, as well as limited-edition Guess jackets specially painted by American artists.

Speaking at the auction cocktail party, Di.Re president Titti Carrano emphasized the group’s educational focus, saying that “the fundamental problem of male violence against women is a cultural one…and so it’s there, at the root of the problem, that we have to have an impact.”

Marciano said that in Italy, violence against women “is not an easy subject to address; it’s not a popular topic. It’s almost a borderline disturbing topic, and that’s exactly the challenge. Because in today’s world, in 2015, that these things happen… and that nobody talks about it disgusts me.”

Denim Day originated as a protest against a 1998 Italian Supreme Court ruling, since overturned, which found that a young woman must have engaged in consensual sex because she was wearing tight jeans; according to the judge, her assailant could not have removed them without assistance.

In response, the Los Angeles-based non-profit Peace Over Violence encouraged American men and women to show their solidarity every April 29 by wearing jeans and fighting a culture that defaults to blaming victims for their abuse.

The jeans help with “really understanding that your clothes are not the cause of anything,” said Patti Giggans, executive director of Peace Over Violence and founder of Denim Day.

Guess, which is known for its overtly sexy, retro-flavored advertising campaigns featuring models such as Claudia Schiffer, Anna Nicole Smith, Laetitia Casta and Kate Upton, may not seem like the obvious pick for a brand crusading against assault, but Marciano stressed that women should be free to be sensual without their appearance being taken as an invitation to violence.

“I’ll never be able to create an image that everyone will like,” he acknowledged, adding: “My idols were always Sophia Loren, Brigitte Bardot and Marilyn Monroe, and today, 50 years later, they’re still symbols of world cinema, and they were always associated with a very feminine and sexy image — and that isn’t a bad thing, not at all. These women, these actresses, they created a dream around the world. In my photos, I try to re-create and reimagine dreamlike images,” he said.

The Guess Foundation Europe, founded in 2014, is an extension of the Guess Foundation, which launched in Guess’ headquarter city of Los Angeles in 1994. Next year, Marciano aims to extend Denim Day to Barcelona, as well as either Paris or London.

“My challenge is to find public figures, celebrities, who can come speak [at the events] or support the project,” he said, noting social media was also crucial in getting out the message.