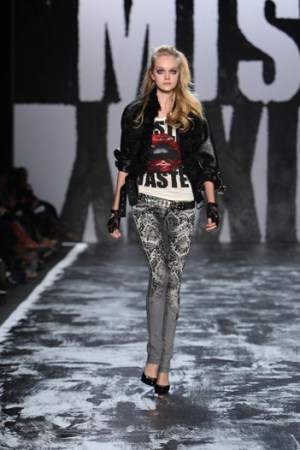 ROME — The global recession has led to red ink and dramatic change at Sixty SpA, but company founder, chairman and creative director Wichy Hassan has the benefit of perspective.

Acknowledging the challenges facing his company, but adding they have “galvanized” him, Hassan recalled his family’s flight from Libya in 1969 after Muammar Gadhafi’s overthrow of the monarchy. He was a child when the family was forced to leave home and fortune behind.

“My parents had to literally start all over again here,” Hassan said during an interview in his sprawling terraced apartment with a stunning view of the Roman skyline. “I’ve seen worse.”

Sixty SpA, which produces the Miss Sixty, Energie, Killah, RefrigiWear, Murphy & Nye, Baracuta and Richlu labels, carries a significant debt load. At the end of 2008, debt totaled 404.5 million euros, or $594.6 million, down from 492.7 million euros, or $675 million, at the end of 2007. Currency figures have been converted from the average exchange rates for the periods to which they refer.

The firm’s performance in major global markets has also faltered. The group’s U.K. branch was forced into administration, a British bankruptcy process, in October 2008. After renegotiating contracts with retailers and landlords of its 12 branded stores, Sixty UK exited administration in April.

In September, Sixty announced it was outsourcing management of Miss Sixty and Energie stores in the U.S. to Canadian retailer Aldo Group.

“Our stores in the U.S. have not been working for the past five or six years because they were mismanaged, and the simplest thing would have been to close everything, but I’ve always been excited about the American market,” Hassan said. “We have the best windows in New York, Los Angeles, Boston, and I couldn’t just give it up. Aldo is fantastic; they have a total vision of the territory, and I have great faith we can do a lot together.”

The majority of Sixty’s U.S. business is generated by its 14 full-price and six outlet stores, as its wholesale business has been challenged by the weak retail climate. The company recently closed two full-price stores in Honolulu and Dallas. The U.S. retail-wholesale ratio is a departure from Sixty’s worldwide business, where 80 percent of sales come from wholesale and 20 percent from retail.

Hassan was especially unhappy about forgoing Miss Sixty’s runway show during New York Fashion Week in September, but viewed it as a necessary step. The company had staged a big-budget show in New York for seven previous seasons.

“It was not only a cost-cutting issue, but a sign toward our clients and our company workers,” he said. “We can’t be detached from the reality and the catwalk felt unnecessary and presumptuous.”

Hassan was noncommittal about future presentations. His plans for breathing new life into Sixty are straightforward and already under way.

“It’s time to be more concrete,” he said.

The company’s wholesale and retail operations have been restructured, new licensing agreements and retail partnerships have been inked and tighter cost controls are being implemented. For example, deliveries of the spring collection to retailers that could not guarantee payment were halted.

Hassan is working with unions and the government to keep Sixty’s 500 employees at its Chieti, Italy, headquarters. An agreement has been reached that will see reduced Friday hours for 70 workers and have part of their salaries paid with government funds for eight weeks.

Despite a few sleepless nights, Hassan remains positive about the future. Sixty’s earnings before interest, taxes, depreciation and amortization will grow in 2009 to 50 million euros, or $68.5 million, compared with 35.7 million euros, or $52.4 million, in 2008.

“It’s a small, but a very relevant signal,” Hassan said.

Although Hassan conceded Sixty is courted by potential suitors and Italy’s Unicredit bank is said to be interested in taking a stake in the company, no specific deal is in the works.

To contain costs, Hassan has streamlined production, shutting a factory in Padova, Italy, that produced Murphy & Nye merchandise. Since last year, 40 underperforming stores have been shuttered while 115 units have opened.

The group has signed new Miss Sixty licenses with Alcatel for its first portable phone and with the Italian home textile firm Gabel for bed and bath linens reproducing Miss Sixty’s iconic psychedelic, colorful prints or used denim looks. These collections will be unveiled in February and will be in stores in March or April. Miss Sixty also counts an eyewear license with Marcolin and a jewelry and watch license with Morellato.

On the retail front, Sixty has signed a distribution agreement with Gupta H.C. Overseas to open 150 accessories stores in India during the next five years. The first opened in Delhi last month. The company has also joined forces with Max Oriental to open Miss Sixty accessories stores in Asia and with Foshan to launch Killah shoe stores in China. With IBPL, Sixty has signed a license to distribute Energie and Killah footwear in South America and Asia, excluding China. The Italian company has opened 30 stores in China in the last two years, bringing the total to 99.

Next year, 10 more stores are expected to open in China. Units in Paris and Lisbon are also in the works. The group counts 331 stores.

“There are signals showing improvements in retail, such as a 23 percent growth in China, and sales picking up 6 percent in Germany, which has always been an important market for us,” Hassan said.

A temporary Energie store will also open in Milan’s central Corso Venezia on Sunday, with art and graffiti shows taking place in that venue. Italy accounts for 44 percent of sales.

Hassan said he is getting more involved with the wholesale side of the business, giving additional guidance on direction and providing capsule collections.

“Wholesale is like an old boxing champ that has been hit a lot and does not know exactly where to go,” he said.

Fit, special detailing and a good balance of products remain a priority.

“I’m anxious, but I also feel galvanized and this crisis makes me want to work more,” Hassan said. “After all, my company is my life.”