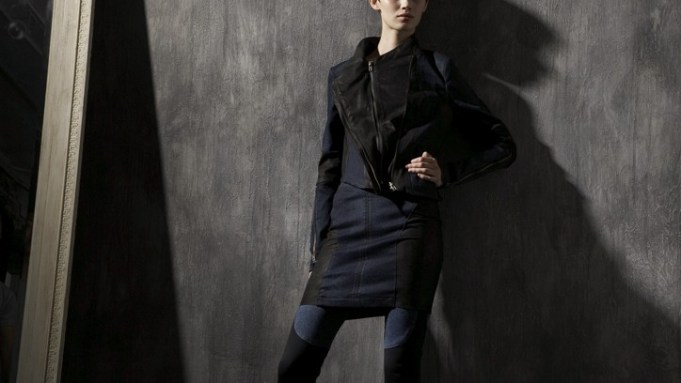 NEW YORK — Since taking over Helmut Lang three years ago, Theory president Andrew Rosen and the label’s designers, Michael and Nicole Colovos, appear to have found their groove after a somewhat shaky start.

According to major retailers, the label’s leather leggings, leather jackets and jersey T-shirts are bright spots in advanced contemporary departments, particularly in this bleak retail environment, and the brand has attracted a wide range of customers by evolving the original Helmut Lang aesthetic without betraying it.

With the recent momentum, Rosen and the Colovoses are ready to extend the line. For spring, Helmut Lang will launch a stand-alone denim collection. But don’t expect the collection to sit in denim departments. Rosen, who is known to think outside the proverbial box, and the designers have created a denim collection of pants, skirts, jackets, dresses and T-shirts that pick up on many of the signature silhouettes. The fabric comes in multiple washes and treatments, and is often interspersed with jersey and denim, adding a rock ’n’ roll edge to the line.

Rosen, who has run the Helmut Lang business since Link Theory Holdings Ltd. bought the label from Prada in March 2006, envisions a separate jeans area in the advanced contemporary sector, and has already consulted stores about such a configuration.

“There is an opportunity in the jeans business,” he said. “I see this as the next generation of jeans.”

While the company has had jeans before — they were actually the bread-and-butter category under the namesake designer — Rosen considered them more of an accessory to the line since the Colovoses took over the design. “Now we want to get more serious about it,” Rosen said. “Helmut Lang was the next generation in contemporary. The idea is that Helmut Lang Jeans is the next generation of denim.”

The $8 billion women’s denim business has been one of the stronger-performing categories throughout the recession, and Rosen hopes to look at the area through a contemporary lens.

“I think that in business today, you have to work a little harder and have a fresher approach to excite the customer,” he said. “You have to raise the bar today.”

“We wanted to approach this new concept in the same way we approach the collection, with a lot of combinations,” Michael Colovos said. “It’s a mix of leather and denim, or jersey and denim, with different washes. We also wanted to get away from the traditional Western feel [of denim]. For the collection, we believe in layering, and we believe in it for denim as well.”

Nicole Colovos added denim is a fabric she and her husband always loved working with, especially given their background as founders of the Habitual label, which they left in 2006. Rather than reference the designers’ experience in denim, though, the new jeans concept takes its cue from the main collection.

“Now it feels like we have a base that we can refer to, and evolve and move forward,” said Nicole Colovos, who, with her husband, is celebrating Fashion’s Night Out tonight by helping customers create a custom-designed leather jacket at the Helmut Lang boutique at 819 Washington Street. “It feels like the right time to go back into denim.”

Link Theory relaunched Helmut Lang as a contemporary line for spring 2007, and Rosen conceded that it got off to a shaky start. “Aesthetically, we were doing designer clothes for the contemporary market, and they were a little too esoteric for the market,” he said.

Since then, they have worked on tightly editing the collection and improving fit and quality issues, and the retailers agree the line has caught one.

Ron Frasch, Saks Inc.’s president and chief merchandising officer, recalled how, about a year ago, Rosen reached out to the retailer to discuss the Helmut Lang business. “He saw an evolution of the contemporary zone of business,” Frasch said. “He saw the business was moving to a more sophisticated product offering that was probably a little more urban and maybe, more importantly, a product offer that can attract more than just the traditional contemporary client base, and perhaps even service designer customers.”

Frasch added the conversation became a catalyst to help Saks rethink its contemporary business, resulting in the Workshop department, which sells Helmut Lang, Rag & Bone — another hot label in which Rosen is invested — and Elizabeth & James.

“Helmut Lang has done very well,” Frasch said. “They are very strong in understanding that this is a client who buys items, which plays quite well to a business that wants to appeal to more than just a traditional contemporary customer. We are pretty bullish on them and expanding the business and rolling it out to more stores.”

Frank Doroff, Bloomingdale’s vice chairman and general merchandise manager of ready-to-wear and Bloomingdale’s Direct, called the Helmut Lang business “phenomenal,” saying it has more than doubled in the past year in the retailer’s advanced contemporary zone. Doroff said that in the contemporary area, there were “a lot of things that were appealing to the same customer, and Helmut Lang’s aesthetic was just so different, so refreshing, so clean and so modern. It just took off, not the second it hit, but particularly this year, we have expanded it and put it in the front, and the business has been exceptional.”

Lewis Hopkins, senior vice president and general merchandise manager of women’s wear for Holt Renfrew, concurred the line picked up momentum last fall and has since continued to grow. “We have it in all of our flagship stores and will be adding a couple more stores for spring,” Hopkins said. “They really worked on editing the collection but I also think the timing is so right for them in that fashion has caught up to their aesthetic. They have these great items that transcend our customer base. Our designer customers also love the collection.”

Khajak Keledjian, chief executive officer of Intermix, said Helmut Lang has particularly benefitted from the leather trend, which the Colovoses have mastered at a good fit and accessible price point, without forsaking the DNA of the namesake designer.

“I think a lot of the origin is still there in the fact that they design a very clean, edgy and slick collection,” Keledjian said. “They have done a great job at keeping the brand’s essence.

“Ultimately they get their report card when they are selling,” he added. “We have had so many reorders back to back since the beginning of the season.”

In the U.S. and Canada, Helmut Lang is sold in about 200 doors, and the company has global wholesale sales projections at just over $50 million.

The new denim collection, which is presented in a separate showroom within the company’s headquarters at 525-531 West 26th Street, is priced from $205 for denim leggings at suggested retail, to $220 for denim shirts and denim skirts interspersed with jersey, to $265 for denim leggings with jersey. The company declined to disclose wholesale price points.

Rosen feels confident about the denim concept. “I think it could be bigger than collection,” he said. “This has a wide-reaching audience, and I think we can sell this to at least 30 percent more doors.”