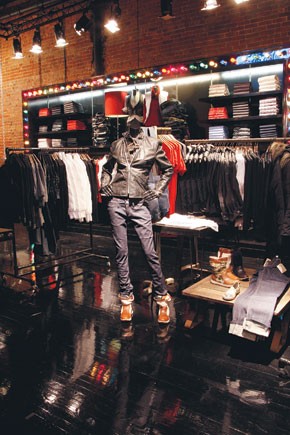 “We will make sure we can tell the story in more places than just a few,” said Gary Sheinbaum, president of Tommy Hilfiger retail. Once the store gets off the ground, “we’ll look for the next round of locations. There are lots of ways to do this, even in 1,800 square feet.”

Tommy Hilfiger in September opened its first women’s-only store, an 825-square-foot unit on Bleecker Street here. Before that, Hilfiger had not launched a U.S. store since 2001, and in 2002 closed 37 of its 44 U.S. specialty stores.

The company was sold to Apax Partners last year and is being repositioned, including an exclusive deal with Macy’s, as well as an effort to raise the quality and design of its ready-to-wear.

Hilfiger Denim launched in Europe seven years ago and has about 50 units overseas, but is unknown in the U.S. Brand director Michael Arts, alluding to the company’s transition and the delay in coming to the U.S., said: “The reason we’re coming here now is that we had a lot of other things to do.”

Hilfiger Denim is the company’s fourth full-priced store in the U.S. And there are more in the works. Men’s and women’s sportswear stores will open in the spring in the Georgetown section of Washington and Miami’s South Beach. A garden behind the South Beach store will lead to a surf shop in a separate building.

Hilfiger Denim has the egalitarian goal of appealing to a diverse customer base with more than 70 different fits and washes.

“Denim is the second biggest business after sportswear,” Sheinbaum said.

In the SoHo store, a selection of vintage clothing is distinguishable by the plain metal dry cleaner’s hangers to which pieces are pinned. Prices range from $60 for a men’s tie to $1,200 for a leather jacket.

Prices for jeans are $98 to $175. A limited edition collection of Selvedge denim signed by Tommy Hilfiger sells for $375. Nonsigned Selvedge pieces are $250.

The space at 500 Broadway grooves to a disco beat, a theme chosen because the denim customer is “more youthful, edgier and a little hipper,” Arts said.

Disco balls dangle from the ceiling, and the floors, columns and ceiling are painted black. There are black leather rugs and the 300-square-foot cash wrap is designed to look like a bar, covered in black leather and with acrylic bar stools. All that’s missing are velvet ropes outside.

Exposed trusses à la Studio 54 are hung with silver globes. The focal point of the store is an LED chandelier, which changes colors and can display projected images. Arts said it’s a nod to the installation art scene of the Seventies. Framed vintage posters fill the walls — Jimi Hendrix, 7-Up, Op-Art patterns and a neon pink Motel sign — and are for sale. Reproductions of Arne Jacobsen’s egg chair, Seventies Mod plastic chairs and a Florence Knoll design are scattered throughout the store. A DJ booth will be occupied on weekends and during special events, but the playlist won’t be limited to disco.

In the dressing vestibule, a long wall covered with insulation and foil paper is intended for shoppers to leave their marks by scratching out their initials or writing a saying, just like the high school bathroom or the restroom of a disco.