Denim firm Hudson Jeans is taking it up a notch. 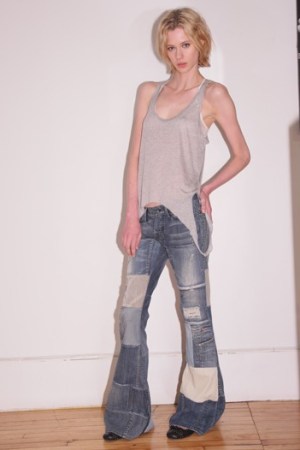 Hudson Jeans is taking it up a notch.

The Los Angeles-based denim firm will launch a slightly higher-end jeans collection for spring. Although the brand name will stay the same, the collection will be recognizable by its new labeling — a simple white tag with the Hudson name written in black on interior waistbands and hangtags — as well as by its design.

“This collection is a true evolution of the Hudson brand, just taken up to a new level, which is why we didn’t name it something new,” said Peter Kim, chief executive officer of Hudson. “This line showcases who we are and shows that we are growing up.”

Part of the growth process has been possible because of a $30 million investment in the company this year by Fireman Capital Partners and Webster Capital, Kim said.

The new Hudson collection will ship twice a year, and the core Hudson line will continue to ship as it does now, 10 times a year. The core line consists of the styles for which the brand has become known during its eight years in business. This new collection reflects the full expression of head designer Ben Taverniti, who has been with the firm for three years.

“This collection has a lot of detail, which is something we can’t do in the core collection,” Taverniti said. “There is no holding back with these jeans.”

The first collection, which will ship for spring selling, is broken into four groups: minimalist, resurrection, D.I.Y. and subversion. Each group has a range of silhouettes, including skinny, baggy skinny, high-waisted skinny or flare.

In minimalist, the jeans are constructed in what Taverniti called the fabric’s “purest state,” in a palette of black, white and dark blue unwashed denim. Subtle accents appear throughout this group, such as in the stitching on the leg to create a quilting effect or the darted back on a pair of skinny-leg jeans.

In resurrection, each pair is one of a kind, since the denim fabrics used for this group are recycled from the Hudson archives. Old samples are torn up and put back together into new styles, and the positioning and placement of each of the denim panels is random. For example, a signature Hudson flap back pocket from an old pair of Hudson jeans may be placed on the leg of a pair in the resurrection group.

In D.I.Y., the group has a handmade quality, with exposed-zipper flies, darts and cut-off waistbands. Jeans are designed in distressed denim washes and rough details are seen throughout, such as with raw edges on leg openings and exposed hardware. In subversion, the group is a salute to military-inspired styles, such as skinny cargo pocket jeans in colors like army green and jet black.

The new Hudson collection also comes with a range of jersey tops to work with the jeans — asymmetric and oversize T-shirts and tanks in simple colors such as black, white and gray. Taverniti said he plans to eventually add jackets and other items to work with the jeans. The Hudson collection wholesales for $100 to $450 for jeans and $65 to $85 for tops. It has been picked up by Barneys New York and Jeffrey New York.

“We like that the distribution of this collection is very exclusive and now, more than ever before, our customers want something that no one else has,” said Philip Manghisi, associate buyer at Jeffrey. “This is the first time that we’ve picked up Hudson and we like that it stays true to what they do best, but is more grown up.”

Kim declined to make sales expectations for the collection’s first year at retail, but said distribution of the Hudson collection will remain exclusive to only about 10 retailers worldwide.