The denim label is moving on from the branding formula that has worked in its favor for 12 years. 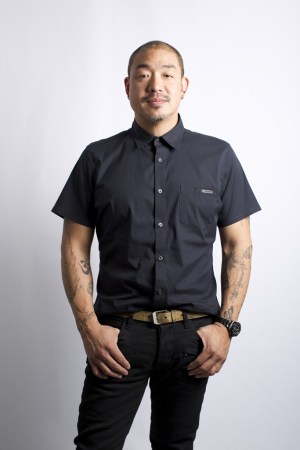 CITY OF COMMERCE, Calif. — As the maturing premium denim industry moves to revive consumers’ interest amid competition from sectors like activewear, Hudson Jeans is moving from the branding formula that has worked in its favor for 12 years.

After three years of flaunting rock-and-fashion progeny Georgia May Jagger in ads, Hudson is vowing to exclude models from its creative campaign and stop the Photoshopping of images. Using “real, crafted and optimistic” as its new brand pillars to replace “sexy, mysterious and cool,” Hudson is embracing the democratic and authentic spirit enabled by social media, blogs and vlogs, in which anyone can do their own thing.

“Aspirational — I hear this word all the time and it makes me puke,” said Peter Kim, Hudson’s founder and chief executive officer, at the brand’s loftlike headquarters. “Aspiration isn’t just physical beauty. Aspiration is what you’re doing in life.”

Working with Violette Design as its creative agency, Hudson began the project last fall by hiring brand strategist Paul Worthington to talk to retailers, ranging from American Rag Cie to Mario’s to Neiman Marcus, about the state of the premium denim market and its own position in it. While Hudson hinted at its new direction this past spring, when it canceled a photo shoot in Morocco at the last minute and displayed instead a blank space with jagged red, white and blue streaks on the top left-hand corner to suggest a torn page, it’s saving the big unveil for this fall. Tweaking its Union Jack symbol, its new logo spells out “Hudson” and “Hudson Jeans” with a slight bend to imitate the curve of a banner waving in the wind.

The ads also emphasize a message rather than an image by layering an affirmation over Yayoi Kusama-like blobs of red and blue. While Hudson ran a four-page spread from the campaign in the August issue of Flaunt, it’s unleashing a barrage in the September editions of Vogue, Details, Vanity Fair, Teen Vogue and Glamour, encouraging readers to practice “self-expression, not self-obsession” and “risk not regret.”

Acknowledging that its customer base is comprised of people over 30 — a stark contrast to the 22-year-old Jagger who had fronted Hudson, it hopes this approach will build long-term loyalty with consumers who are in their 30s and 40s. The branding concept also will appear on Hudson’s business cards, hangtags and retail displays.

“This is purely about the essence of the brand and how the brand shows up in the premium denim space in a very, very different way than anyone else has done before,” said Hudson president Barbara Cook.

Cook’s arrival last year following stints at The Wet Seal Inc. and Gap Inc. signaled a new phase in the company’s evolution. In the past year, it’s hired 10 people to infuse a fresh perspective in management, marketing and design at the 150-person company.

Now a subsidiary of Joe’s Jeans, also based in Commerce, Hudson declined to disclose the spending on the new branding initiative. Executives acknowledged the costs didn’t decline even with the absence of a celebrity model. Instead, they redistributed the expenses to new avenues, such as filming videos and creating content for social media. Joe’s Jeans said overall selling, general and administrative expenses, including advertising, increased 23 percent to $39.5 million for the six months ended May 31 from the same period a year ago. In that six-month period, it posted net income of $161,000, reversing a net loss of $5.2 million, as sales grew 58 percent to $95.5 million from $60.3 million.

To be sure, Hudson isn’t demoting fashion in its designs as it is in its ads. The fall collection highlights $235 jacquard leggings with ankle zips and $245 black moto-inspired jeans with striped detailing at the knee.

“We’re not going to make balloon pants,” Kim said, adding that the goal is to “not shake up the product. We’re shaking up the message to the consumer.”