The premium jeans firm is marking its first decade with a new ad campaign starring Georgia May Jagger. 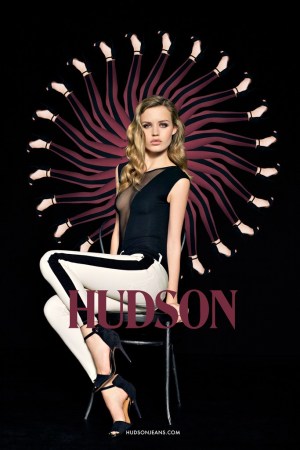 CITY OF COMMERCE, Calif. — Celebrities and retailers have played a pivotal role in the growth of the premium denim business, and Hudson Jeans is paying tribute to both as it marks it 10th anniversary.

Hudson is unveiling today its latest ad campaign starring Georgia May Jagger, the sylphike daughter of Mick Jagger and Jerry Hall, who has served as its celebrity spokesmodel for three years. The cabaret-themed promotion, created by Paris-based boutique ad agency Al Dente and photographed by Dan Martensen, represents Hudson’s biggest marketing effort ever. Set to run in niche publications including Interview, V, Nylon and Flaunt, the print ads are supplemented by short videos directed by Patrizio Miceli and Martial Schmeltz that star Jagger and guest musicians such as beat-box artist Tez and French air guitarist Gunther Love.

With Jagger cooing the tag line of “Let yourself go,” the campaign highlights a quartet of jeans designed especially for the anniversary that will be launched exclusively by a select circle of retailers around the world. For instance, Nordstrom, which has carried Hudson for seven years, will receive the 10th Anniversary Jean, a superskinny style based on Hudson’s popular Nico fit that is available in four treatments, including a digital print that looks as if the Union Jack and Old Glory flags were melted together. Bloomingdale’s, another longtime U.S. retail partner, along with Selfridges in the U.K., where Hudson has done business for about five years, will both carry the Leeloo Jean that is enhanced with a contrast waistband and side stripe.

Specialty stores in the U.S., which Hudson considers the heart and soul of its distribution, are among the retailers that will get first access to a zip-front style called the Juliette Jean, whereas Bergdorf Goodman claims exclusivity Stateside for the Art Deco Jean that features intricate side embroidery. Other retailers chosen for the exclusive launches represent beachheads in Hong Kong, Paris, Milan, Brussels and other prominent cities in Germany, Belgium and Switzerland. The exclusive partners will receive the jeans, retailing from $146 to $355, for a month before Hudson widens distribution.

“It was a way to provide more to our retail customers,” said Peter Kim, Hudson’s chief executive officer and president, of the exclusive launches. “We have a big focus on partnerships.”

With sales estimated at $100 million, Hudson is counting on retailers to help it hit its target of 30 percent growth this year over 2011, when it recorded its biggest year in its history with a 40 percent increase in sales. It recently moved its 125 employees into new loftlike headquarters in an industrial zone here outside of Los Angeles.

Eyeing men’s as a new category for expansion, Kim said the goal is to increase the men’s division from 10 percent to at least 25 percent of the business. This past spring, it released men’s jeans designed to mimic the yearlong process aging of raw denim in only 60 days with a promotion featuring street artist Kai and DJ Vice. Hudson plans to introduce a new men’s product using exclusive fabric from Turkish mill Isko for the holiday season.

To test the waters for opening its first freestanding store, Hudson opened a yearlong shop-in-shop at Satine, an influential boutique in Los Angeles, earlier this month.

“For us, it’s not a matter of whether retail will work or not,” Kim said. “It’s open to when it’s a right time.”

Hudson is continuing to build its brand with its ad campaign, which will air not only on its own Web site but also its retailers’ sites and other Web publications.

“You need the pictures but you need video in today’s world,” said Tony Chu, Hudson’s vice president of marketing and communications. “You need a narrative.”

The story runs wild in one film in which Jagger sits atop a golden lotus like an Indian goddess as Brooklyn-based trio Au Revoir Simone strums a dreamy pop tune. Lest the viewer forget that it’s a promotion for a denim company, the women are all wearing the Art Deco jeans and a halo of denim-clad stilettoed legs fans out from behind Jagger’s head.

“It’s about the spirit of the cabaret — being free [and] letting yourself go,” Chu said.