Hues, Blues Square Off at Kingpins

Jeans and denim marketers try to gauge impact of indigo revival for spring 2014. 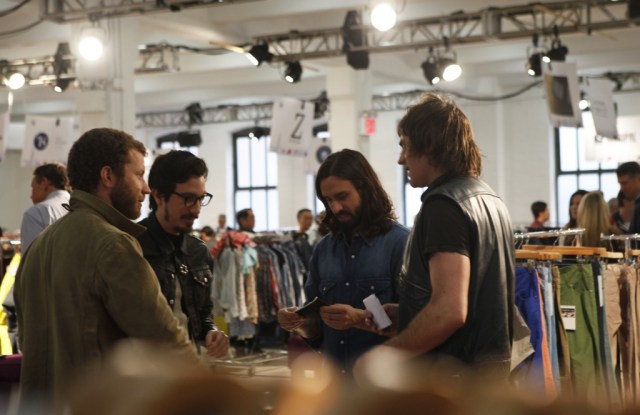 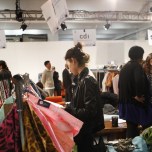 NEW YORK — A bruising battle of “hues” versus “blues” is developing in the denim market as a resurgence in classic indigo squares off with the persistent strength of colored jeans.

Exhibitors and retail and vendor guests at last week’s Kingpins show at Center548 here were seeking a balance for spring 2014 between different interpretations of truly blue jeans and the growing number of colors that have proven to have more staying power than many expected. Colored denim, as well as lighter-weight twills in various jeans constructions, have maintained a strong share of the women’s jeans market in recent seasons and appear to be gaining, rather than losing, momentum in men’s, where their effect has been less powerful and the color palette narrower.

Riccardo Mencarelli, U.S. agent for Bossa Denim & Sportswear, based in Turkey, said, “Color has held up and we’re going into spring 2014 expecting about a 50-50 split between color and blue. Coatings, for color and for blue, are holding up well and providing a sense of value added to the customer.”

Among the fabrics generating strong interest for Bossa was an indigo with contrast coating on the reverse side of the fabric, selling for about $6.50 a yard. “It’s a more dressed-up look and it will take a few seasons to work its way into the market,” Mencarelli said.

“‘Vintage’ and ‘authentic’ are all you’re hearing right now from the people in the premium market,” said Richard Tobin, director of merchandising and product development for Tavex, a denim producer with facilities in Mexico, “but we’ve got to begin to present some things for the 21st century, instead of just repeating the ideas of the 20th, if we’re going to hold the consumer’s interest whether you’re talking about the premium level or the price tier beneath it.”

Tavex’s answer is its WaxFit family of products, which utilize resin coatings to give indigo — and some nonindigo colors as well — more pop, texture and wear patterns that reflect the owner’s use.

“Newness matters,” Tobin added. “You need differentiation if you’re going to create a ‘gotta have’ item and get a good price for it.”

Michael Kininmonth, Lenzing’s project manager for textile fibers in Europe, noted that the shift towards indigo is stronger in Europe, where “newness” is coming out in silhouette experimentation and fabric innovations that frequently hinge on sustainability.

“The environmental aspect is a stronger story in Europe than it is in the U.S., both because of the thinking of the companies in Europe and regulations they need to follow,” he told WWD. Lenzing recently has experienced more rapid adaptation of its Tencel fibers, derived from eucalyptus, among European brands such as G-Star Raw and mills such as Candiani in Italy and Isko and Orta in Turkey, he noted.

Vertically integrated Kaltex, with facilities in Mexico and Colombia, showed a number of fabrics and finished garments incorporating performance attributes, and utilizing Invista’s ToughMax, and color retention, using Lenzing’s Tencel. But much of the interest at the show was directed at its Blue Jean Vintage offering.

“There’s been a major reemergence of the ‘true blue jean,’ but it has to be updated with finer yarns, innovative treatments and new construction,” said Alvyda Silinyte, design director for Kaltex America Inc. “Still, color is not going away. In the women’s market, it’s becoming more muted, but it’s been very stable and it’s even been picking up in men’s.”

She also noted growing involvement in her firm in sustainable substances and practices, pointing out that the Blue Jean group uses manual hand sanding and whiskering prior to an environmentally safer ozone wash process. In other parts of the line, waterless laser and ozone processes are used to achieve whiskering and fading.

While last week’s edition of Kingpins New York discontinued the Continuum section devoted exclusively to sustainability, signs of its growing impact were visible throughout the market. Turkey’s LST — for Laser Technology Systems — was at the show promoting its laser and ozone machinery and the training it provides to companies signing on to acquire it.