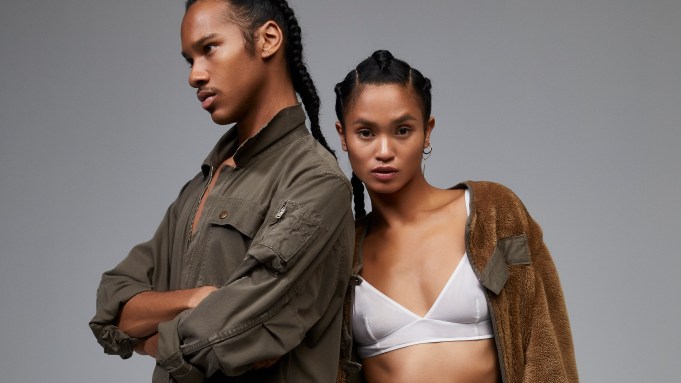 True Religion wants in with the “in” crowd. To do that, the Manhattan Beach, Calif.-based denim firm is set to launch a limited-edition capsule Monday, linking with Hypebeast sister creative agency Hypemaker on the rollout.

Hypebeast Ltd. owns a portfolio of brands that includes Hypemaker in addition to the men’s streetwear and fashion site Hypebeast and its sister site Hypebae, aimed at women. The company was seen as the “premier partner in publishing” to align with, explained True Religion chief marketing officer Tara Peyrache.

“We have a pretty strong following and folks that really love this brand for the aesthetic value around fleece and denim and thought this was definitely an assortment we wanted to get our arms around,” Peyrache added.

The collection, dubbed The Great Revolt Capsule, totals 30 unisex pieces described as a blend of influences between the street and military. The pieces, all made domestically, include a reversible Sherpa jacket, wide-leg cargo pant and oversize parka with details such as raw hems and neutral color palette of black and muted Army green.

The Great Revolt is priced from $89 to $499 and will be sold on the True Religion web site. Special events kick off in Hong Kong Monday followed by a shopping event at True Religion’s Carnaby Street store on Oct. 18. New York will cap the launch series at an Oct. 20 VIP event followed by a SoHo pop-up for consumers to shop Oct. 21 to 23.

For Hypemaker, the job was to build the buzz and bring the kids.

“They have the right reach globally,” Peyrache said. “They have an enormously engaged follower. Their social reach is eight million. That’s enormous.…Those are the kinds of people we’re playing with today. That’s where the relevance comes from.”

The SoHo pop-up will be at 393 Broadway, a location Peryache said Hypemaker presented to True Religion after having done a number of events there.

“Hype really are truly the experts at bringing concepts to life in spaces that are unique so we knew they were going to do this brilliantly,” Peyrache said. “It’s really about bringing the look and feel of the assortment.”

It’s been roughly a year since True Religion has done a pop-up, the most recent being last year with Russell Westbrook when the company did a takeover of an art gallery in Oklahoma City. The short bursts at retail with the pop-ups are very much something the company sees value in.

“It’s a great way for the brand to show its personalities,” Peyrache said. “We coin a phrase here that we have a very diverse population of consumers. If you could imagine the brand being around for 15 years, of course we would.”

For True Religion, which got the nod earlier this month from a bankruptcy court judge on its plan for reorganization, it is hoped the buzz and sales from the partnership kick off a fresh reboot for the brand. The denim company filed for Chapter 11 protection in July, saddled by a high debt load. It’s now looking to start fresh and the new collection, along with the assistance of Hypemaker, could help that.

“I think it’s [about] getting in front of the right customer. The funny thing about True Religion is that True Religion has always been a brand that, for the most part, if you think about it’s connection to the music since its inception and its on-the-street relevance, it’s always been there,” Peyrache said. “It’s a denim brand that’s always had the street in mind and when you look at the brand’s adoption through the relative music genres, it’s had such successes. It’s just something we haven’t stood up and taken ownership of. So we definitely want to take a stronger hand in putting ourselves in front of that conversation.”

The company also appears poised to launch a greater effort on the digital front, something Peyrache said it is strategizing on in a bid to stay competitive.

“There’s definitely a doubling down around a digital transformation for the organization,” she said. “That’s for sure happening as we hit the reset button for the brand.”

The Mighty Company to Bow on Melrose Avenue