In With the New 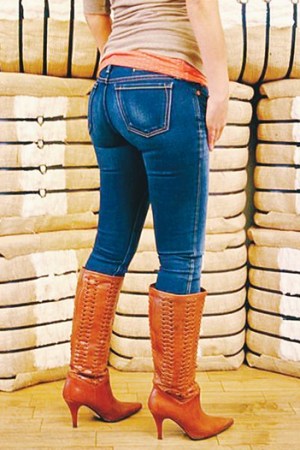 Challenging market conditions are pushing Japanese denim mills to innovate in terms of earth-friendly products and new takes on color and fit.

Manufacturers Nisshinbo and Kurabo are mining ecological themes for spring-summer.
Tokyo-based Nisshinbo is making banana fiber denim, using the normally discarded stems of banana trees to make the yarn, while Osaka-based Kurabo has developed a denim partially made of recycled fibers.

Nisshinbo is emphasizing the importance of softness and shine, making denim out of rayon-cotton blends or Solotex, an elastic synthetic fiber often used in swimwear and undergarments. Kurabo is pushing a two-way stretch denim to make skinny jeans fit more like leggings, while Kaihara is attempting to distinguish itself by adding textured weaves, higher-quality compact threads and new colors like ice blue and gray to its lineup.

New, innovative products are key to Japanese mills’ survival in the current business climate. Even before the global financial crisis started, the denim industry was suffering at home and abroad as competition intensified and consumers passed over jeans for other fashion items.

According to data from the Japan Cotton & Staple Fiber Weavers Association, denim production in Hiroshima and select regions of southwest Japan, where much of the industry is located, slid almost 24 percent in the first six months of the year to just over 289 million square feet of fabric.

“The market is very weak both in Japan and abroad. One reason is the fashion trend is out of denim and the other reason is that there is too much competition amongst many fabric mills,” said Masaharu Tanaka, manager for Nisshinbo Industries’ denim sales and marketing section. “The total market, we forecast, still will be weak, especially in the basic jeans area, but some makers who introduce new and innovative items in the market will succeed.”

Yoshi Kaihara, chairman and ceo of Kaihara Corp., made a similar observation. “Over the past two years, boots have been popular in Japan, so people were wearing more skirts and cropped leggings than pants. This year the trend continued,” he said. As for the U.S. market, premium jeans makers failed to come up with convincing new styles to stimulate demand, he continued. “Consumers get bored if there is no change,” he said.

Kenshi Kawano, president of Kurabo Denim’s Hong Kong and China operations, said high costs, linked to foreign exchange and raw materials, are biting into profit margins at his company. Kurabo, which sells denim to premium players like Ernest Sewn and Citizens of Humanity and more mass market retailers like Abercrombie & Fitch and Old Navy, is considering raising its prices by 10 percent to help offset costs, he said.

“The quantity of jeans sold in the U.S. is not so bad because cheap jeans are being sold at Wal-Mart, but for premium jeans, which cost more than $100, sales are not so good,” Kawano said. “This year, sales are so bad I can forecast that next year will grow a little, but not so dramatically.”