Indigo Girls, All Grown Up

More and more, women are having their day in the once all-male domain of denim.

By Katya Foreman and Natasha Montrose on November 9, 2011
View Slideshow 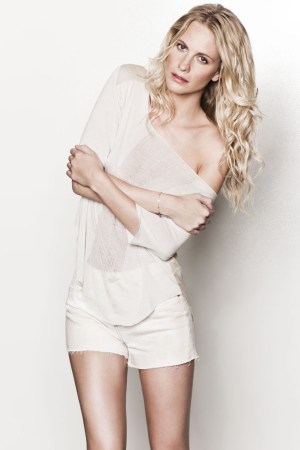 PARIS — While denim’s origins lie in workwear for men, from railroad workers to cowboys, the recent strong evolution of women’s premium fashion denim opened up a more colorful, tactile and notably stretch- and fit-obsessed landscape for the category worlds away from its origins.

After all, in the words of Jason Denham, founder of the denim label Denham: “It’s 2011, and we don’t pan for gold or ride horses and chase Indians anymore.”

Though for many in the industry the denim design arena still remains very much a boys’ club, a number of prominent female denim designers, from Superfine’s Lucy Pinter to Victoria Beckham, over the past decade have successfully exerted a feminine sensibility on the category.

Take Paige Adams-Geller, who after years working as a fit model for denim brands decided to launch her own denim line designed by a woman for women.

Six years down the line, her label, Paige Denim, is distributed in 2,000 doors worldwide.

“I have firsthand experience of the female form and have the luxury of testing what we are selling to make sure it fits perfectly,” said the designer. “I was in such a male-dominated industry…I became frustrated with the designers I was working with because I felt I had a unique vision of what denim could be, especially for women,” continued Adams-Geller, who likes to take the roots of denim and use them as a springboard towards fashion.

“We know our bodies better, we know what we want fabrics to feel like next to our skin, we know what trends we are comfortable wearing,” echoed Jennifer Wojinski, who joined Los Angeles-based denim label Habitual as design director in January. “I think [male designers] often assume that we are OK with wearing what they push out as being cool or on trend. The truth is I think [they] often miss key points, like the shape of a front or back rise, the softness of a fabric, the amount of elasticity. I think men often miss tiny details that one would only think about as a woman.”

Background: “I was a stylist working in London. Denim has always been my thing. At the time no one made a skinny jean and I was taping boot-legs to look skinny. I decided then to make some.”

Woman’s touch: “Women designers make what they themselves would want to wear. Guys concentrate more on selvedge, etc. I think our denim and stretch fabrics are a really girly way to wear denim. We still manage to keep a bit of an edge, though, which is a good mix. Not too soft but feminine.”

Upcoming projects: “A little exhibition for Browns called ‘Cabinet of Curiosities.’ The first cabinet was at Colette, the next will be in Los Angeles, and we are developing a book of ‘girls in their jeans’ with photographer Jan Welters.”

Spring-summer: “Spring-summer was an androgyny story. ‘Girls will be boys,’ with key light tailoring pieces, a silk and sweat section, all kinds of different pants. What made it a little surprising was the color palette of dirty pinks, vanillas, taupes and pale greens.”

Girl power: “I have young women coming to me all the time thanking me for being the first woman in the premium denim market. They are excited about the potential career opportunities they may have now that the doors have opened so much in this fashion category.”

Admires: “I admire Isabel Marant as a female designer and think she has done some interesting things within her line in the denim category.”

Future: “I think that we are heading in a direction with the focus of sustainability.”

Spring-summer: “Sexy and full of vibrant colors, inspired by a free spirit and the possibilities of an open road.”

How did you get into denim? “I’ve worked at a number of the best denim houses in the world…my love for denim grew out of my love for vintage Levi’s that began to blossom while I was still in college. It seemed only natural that I follow this desire and turn it into a career path.”

Is denim still a male-dominated category? “Denim seems to be a male dominated category because as with many industries, from the outside, it appears that men run the show. However, if you look deeper at the designers who are actually making the product, choosing fabrics, pushing new fits and ideas, many of them are women.”

Spring-summer: “The theme is ‘spirits in a material world.’ We’ve identified the need that people have to find a safe place in the world. Since clothing is a way we express ourselves, we started by identifying the major ‘looks’ that are happening across the world. Our customers can comfortably buy our product knowing they will be on trend without being trendy and that they will fit into one of the ‘spirit tribes,’ a safe haven for expressing oneself through fashion.”

Title: Founder of Dzojchen, a Singapore-, London- and New York-based denim label that was launched in 2009.

Background: “Prior to launching the label, I did an array of things within the fashion industry, but the basis of my expertise was in branding.”

Why is denim such a male-dominated category? “Denim has long been a more male-dominated category primarily because of its origins in industrial workwear. Understood, designed and worn by those individuals putting it to true use. Suffice to say, through generations, men were the ones that perfected the craftsmanship of denim.”

Woman’s touch: “We often bring a more emotional value to the garment. Form, tactility, sensuality, originality are fused with the functional essence of denim, producing the perfect paradox. Wanting to make something that I would wear in any given situation, and couldn’t necessarily find in other designers, was the reason why I personally started my line.”

Upcoming projects: “Currently I am working on a capsule collection of leather-denim wear for fall-winter ’12, as well as collaborating with other artists and designers that have gained my admiration and respect in their field.”