Innovation, sustainability and a strong brand identity were seen as key to boost sales of the indigo fabric.

MILAN — Is the Italian denim industry poised to grow?

The country has long been a hub for denim weavers, garment makers and specialty brands setting trends for the sector in terms of design and innovation, but after the industry took off in the Nineties and reached a peak in the early Aughts, it has since stabilized, due in part to the budding ath-leisure and activewear trends, which eroded market share.

“Considering the unfavorable macroeconomic context, especially for the more mature markets that are struggling, business is not decreasing but consumption of denim apparel is slightly down,” explained Guglielmo Olearo, international exhibitions director of Première Vision, the organizer of the Denim Première Vision trade show.

The two-day fair kicking off today is held at the Superstudio Più venue in Milan, where it decamps for the first time after making its debut in London in December an itinerant show format. As part of the new course, the show will touch down in key European cities with mature fashion industries.

According to market research provider Euromonitor International, global retail sales of denim trousers are still on a growing trajectory and expected to generate $104 billion this year, up 4.9 percent compared with last year.

“Denim is one of the few chameleonic fabrics that over the last 50 years was able to adapt to tradition, innovation and trends becoming suitable for different combinations,” noted Niccolò Biondi, chief executive officer of Italy’s storied denim brand Roy Roger’s.

Renzo Braglia, ceo of Brama Group, the European distributor of a range of premium denim brands, including J Brand, Frame, Current/Elliott and Mother, agreed, noting “it’s a timeless fabric, which experiences fluctuations in terms of market penetration, depending on the period. However, since it was widely accepted in the Eighties, it has always been present on the market.”

As a democratic fabric, the appeal of denim products sits in the specialty brands’ ability to tune in with today’s customers that are constantly on the hunt for the latest trends to adopt, including streetwear, which industry players considered an asset to bank on. 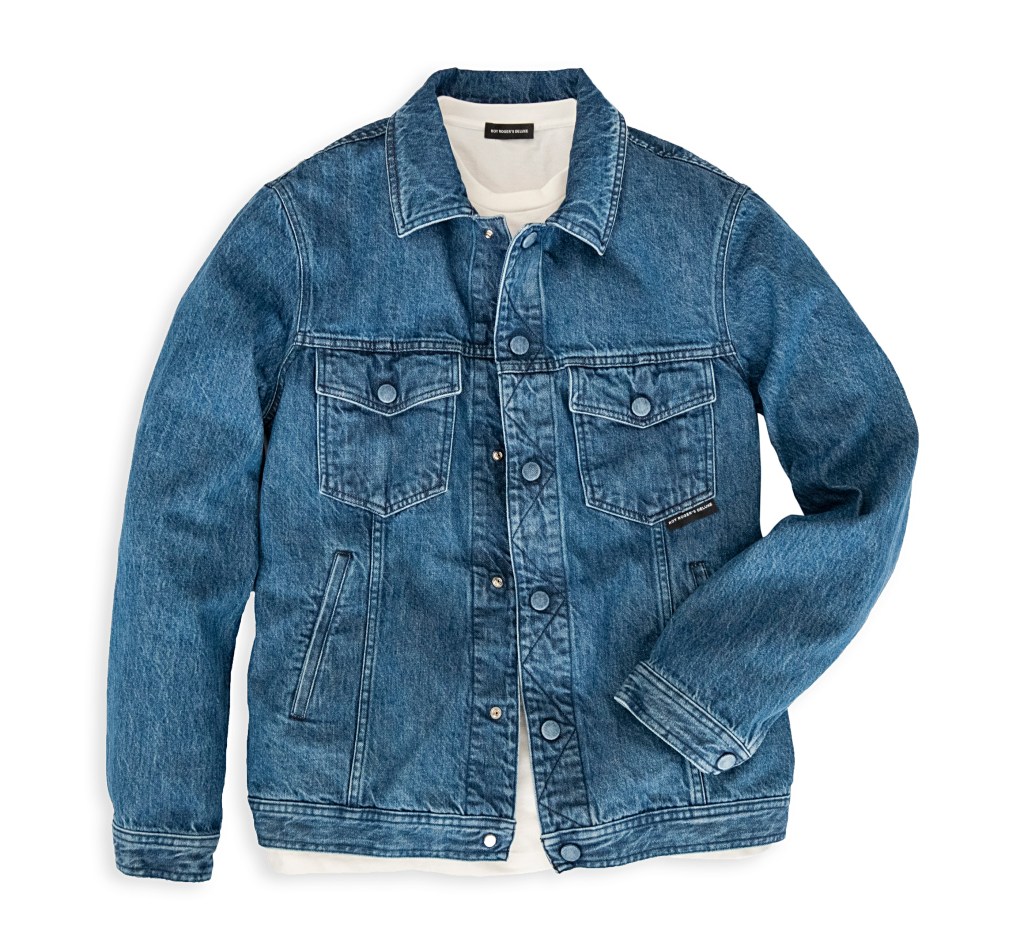 “It’s because of this trend that denim has gained market shares lately. The comeback of the Nineties trend, especially for the youngest consumers, has significantly favored the category,” noted Federica Montelli, head of fashion at Italian department store Rinascente. That said, after seasons of sharp increases, the retailer’s open-to-buy budget for the category remains stable.

Innovation, a distinctive trait of Italian denim companies, said Matteo Sinigaglia, ceo of Replay, is key to success as customers “are informed about the products and trends and are opinionated, much more than they were 10 years ago.”

“There’s a chance to improve the products and make them more relevant than they are, if we keep our authenticity while working on innovation that can be actually perceived by the customers,” Sinigaglia added, highlighting that wearability and sustainability are also sales drivers.

“There are a lot of challenges that denim can face and has already started to. Companies at both ends of the pipeline need to innovate, avoiding the risk of trivializing the product, the message and marketing,” noted Olearo.

Franco Catania, ceo of Italy’s Giada SpA, the denim licensee of the Karl Lagerfeld Denim, Vilebrequin and Jacob Cohen brands, stressed the importance of innovation in design, product development, dyeing techniques and green imprint, which is increasingly pivotal in engaging today’s customers. Innovation comes with a cost, but Catania was adamant, explaining that a higher retail pricing is in line with what customers expect from high-quality pieces. “I’d describe it as an ‘added value,’ rather than a weakness,” he said.

To this end, at the upcoming edition of Pitti Uomo, running June 11 to 14, the manufacturer, which closed 2018 with revenues of 70 million euros, will unveil its first owned men’s brand under the Hand Picked moniker positioned in the premium segment. 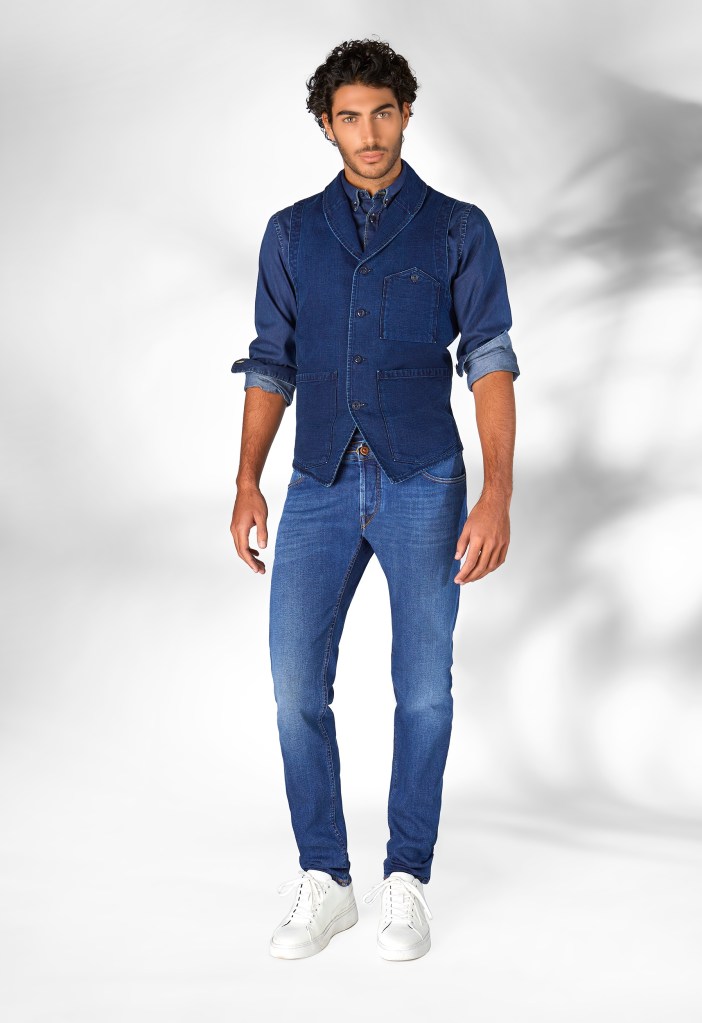 While exploring different categories, including chino pants, cotton shirts and loose jackets, the collection is centered on raw Japanese denim worked for a five-pocket jeans style and jacket. “It’s a natural development: launching our own line through which we can express 30 years of history and all the skills of our team in a super-exclusive product,” said Catania.

Roy Roger’s has also traveled to Japan to source a fabric called Kurabo, which boasts sustainable features as it is obtained by weaving together indigo threads with yarns coming from the maceration of pre-owned T-shirts. The eco-friendly fabric will be worked for a range of jeans for the spring collection, to be unveiled at Pitti Uomo.

“Denim has made great strides, with tangible, noble actions so that the indigo fabric, which has been tainted as the one wasting more energy, more water, more fabric, could become really sustainable,” Olearo said, touting the efforts made by companies at both ends of the pipeline.

Milan’s Denim Première Vision will put the spotlight on sustainability with a range of talks and workshops exploring the topic and offering its 93 exhibitors and visitors a chance to know more about the direction the industry is taking.

Although eco-friendly denim pieces might be increasingly appealing, Montelli noted that when buying jeans, “there’s a certain psychological price threshold that clients still have a hard time overcoming.”

People are willing to spend more when they know that their rights to health are taken into consideration, mused Sinigaglia, who at the same time acknowledged that the ability to produce more affordable sustainable products has further increased their marketability. The Replay ceo stressed that green consciousness is today “no longer a matter of competitive advantage catering to customers’ needs, but a topic to be unavoidably addressed and pivotal to survival.”

Boosted by the casualization of trends, including activewear, comfort and performance rapidly have become must-have features influencing denim purchases especially by “Millennials and Gen Z consumers accustomed to being comfortable regardless of the occasion. This is something we need to consider when implementing fabric innovation,” noted Sinigaglia.

Late last year, Replay unveiled its Hyperflex+ collection in partnership with leading Turkish denim mill Isko. Elasticized yarns both in warp and weft enhance the performance of the patented stretch fabric, which is worked in a range of cuts. The company generated 238 million euros in sales last year and expects a double-digit increase in 2019. 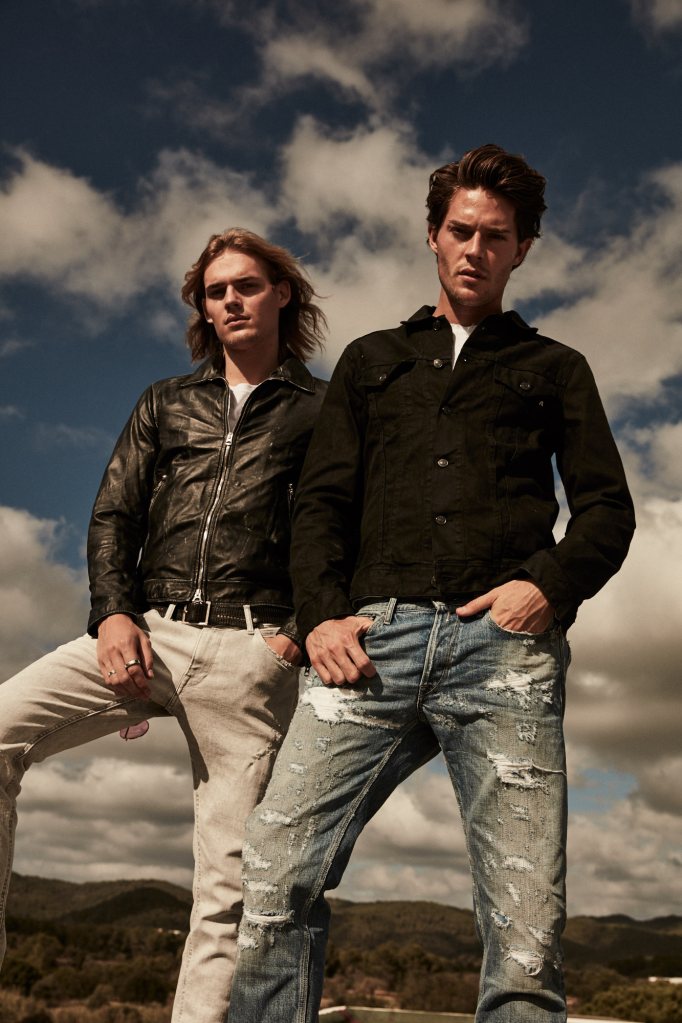 In addition to comfort and stretch fabrics, raw canvas is gaining momentum in retail, explained Fabio Bisogno, the owner of the Milan-based multibrand store Clan Upstairs. Bisogno noted stretch denim has “sort of ‘denaturalized’ the value of the indigo fabric, and although every other denim brand was forced to embrace it, at the same time we’re seeing a return to the added value of the [raw] fabric.”

Euromonitor International predicts the sale of denim pants to register an average annual increase of 5.4 percent until 2023, which according to Brama Group’s Braglia is flatter than it used to be.

“The strong increase that denim experienced between 2008 and 2017 has slowed down and stabilized…also we, as a company, used to register double-digit growths in the past, [while] now we see a more restrained increase year-over-year,” he noted. The company’s sales totaled 45 million euros in 2018 and the executive projected a 10 percent increase for 2019.

Globally, the flattening of the market has particularly affected the smallest players, according to Braglia, while favoring a range of niche denim brands sprouting today. “These have a more hybridized positioning compared to pure denim players, as they expand to ready-to-wear and total looks,” Braglia explained, mentioning cult Los Angeles-based labels Amiri and R13 as examples.

Specialty denim brands here are facing increasing competition, including from luxury labels and fast-fashion firms, which are both embracing the jeans market. From Montelli’s perspective, women are still largely focused on specialty brands while also occasionally buying denim from “fashion brands when seeking a particular total look or specific style.”

With the brands he distributes displayed next to the likes of Balenciaga and Gucci at premium retailers, Braglia doesn’t see luxury labels as competitors nor does he plan to add brands in the midterm. He touted the company’s seven showrooms in Europe and the group’s role as a “bridge connecting the American [denim] brands with the market. We are strengthening this role in order to adjust more rapidly to the fast-changing market,” he said.

Franco Marianelli, ceo of Rifle, believes that the fast-fashion and affordable retailers’ foray into the denim segment created additional competition for Italy’s denim industry. In light of this, the challenges “are mainly two intertwined factors: on one side the accessibility to denim products coming from the Far East, where production has been relocated…and on the other hand the aggressive price policies of the biggest retailers.”

Rifle, which marked its 60th anniversary last year, is conversely focused on “good products at an accessible price point,” which according to Marianelli is paying off. In April the company announced a retail expansion plan in Italy with the opening of three Rifle Jeans Store in the first half of the year. 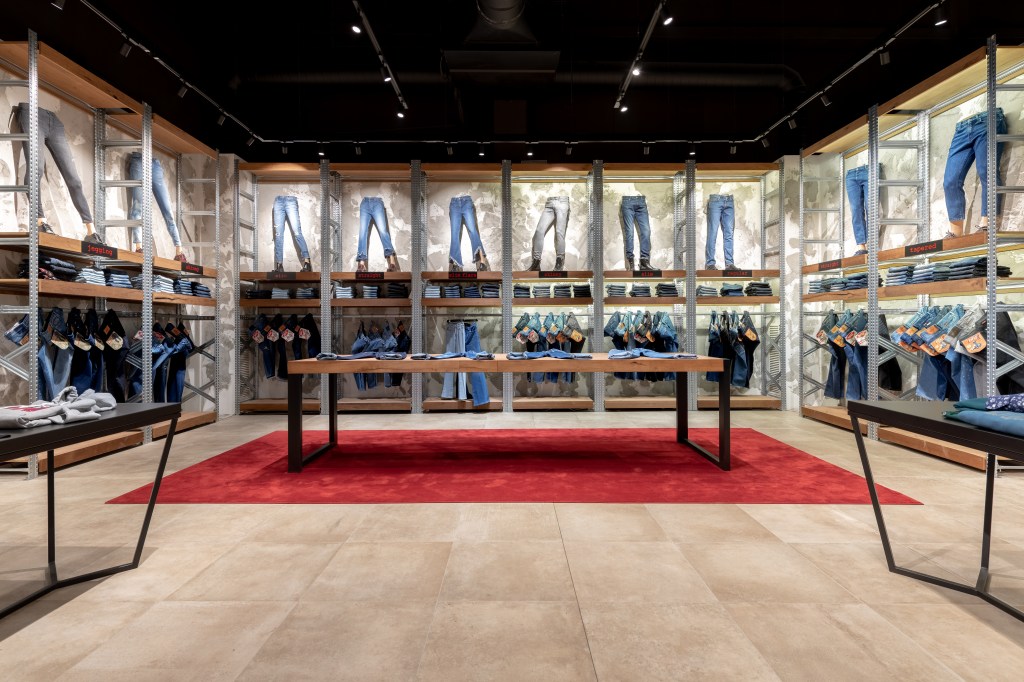 A unit of the Rifle Jeans Store network.  Courtesy of Rifle

In addition, the brand is committed to appealing to customers through an expansion of its offer. For spring, it will enter the footwear category through a licensing deal inked with Sport Commerce Italia Srl for the design, production and global distribution of men’s, women’s and kids’ shoes. “Footwear is not only a complementary item, but also a real booster in sales with great potential,” Marianelli explained.

Italian specialty denim brands are still highly dependent on their wholesale networks. “I believe the competitive advantage in having a strong wholesale network sits in the ability of our partners to deal with customers,” explained Sinigaglia, noting Replay generates 70 percent of its revenues through wholesale.

“I always think in terms of omnichannel strategy and integration of wholesale and retail, both physical and online, because today having as many touch points as possible is crucial for customers’ engagement,” he added, forecasting a 5 percent uptick in retail over the next two years.

Roy Roger’s Biondi agreed, stressing that “retail enhances visibility and preserves the brand’s integrity, while wholesale — despite a contraction [over the past few years] — is still rewarding.” The company counts around 900 doors worldwide and closed 2018 with revenues of 20 million euros, up 10 percent compared to 2017.