The sustainable denim label uses leftover fabric from premium suppliers for collections sold at its new concept store in Amsterdam. 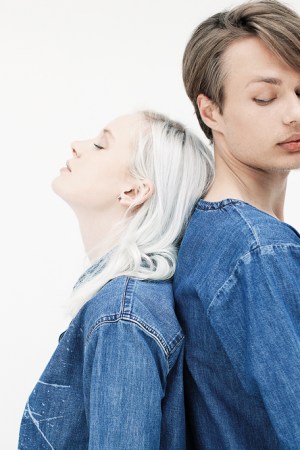 AMSTERDAM — “Who needs another denim brand?” was the question Alexandra and Neil Melgaard-Lewty asked themselves before setting up Ink Inklusive.

“We see a lot of high-street fashion and design, but not much in the middle — something fun to wear, creative and exciting at the same time. And that’s what we are working on,” mused Neil Melgaard-Lewty, a multihyphenate who also is a consulting designer for outerwear and denim at the men’s wear divisions of Tommy Hilfiger and Calvin Klein.

While the excitement could stem from Ink Inklusive’s refreshingly minimalist, no-nonsense cuts, it’s the couple’s idea to use leftover fabrics that intrigues the most. They call it their “livestock” or “forgotten cotton.”

“There is so much warehoused cloth from canceled orders or end of rolls, and it’s just lying there,” noted Alex Melgaard-Lewty, a former creative buyer and merchandiser for LVMH Moët Hennessy Louis Vuitton’s Thomas Pink, Abercombie & Fitch and Bamford & Sons, which is where the couple met.

“What we love about denim is that it’s versatile — it’s a twill. We do not work it like a denim, but like a woven fabric,” she added, elaborating on the sustainable business plan.

In their debut effort, the duo designed a full ecru collection from raw, undyed fabric — no wash, no dyeing process — including a pair of super-wide fit pants and a full-length jacket-style dress without sleeves. A mid-Nineties blue wash — achieved with a laser, not with acid — adds color to carrot-shaped pants and T-shirts for him and her.

There are no seasonal collections at the label, and there is a one-size-fits-all policy — “bottoms have more, but since a lot of people fit into one style, we try to keep the number down,” said Neil, adding that this also helps to keep waste to a minimum.

The fabrics themselves are sourced from coveted denim specialists, including Candiani, Kurabo, Swift, Berto and Demco, while Serengeti Tekstil provides the jersey.

Prices range from 55 euros, or $61 at current exchange, for a T-shirt to 179 euros, or $198, for a jacket from upscale Japanese denim. “We wanted our brand to be inclusive, hence the name. We don’t want anyone to feel priced out. And it’s not just about buying stuff because it’s cheap. The pieces are designed in a way so that they can last,” he explained.

The collection is sold via Ink Inklusive’s new 100-square-foot venue at 248 Laurierstraat in Amsterdam’s arty Jordaan district, housing a retail space in the front and a studio in the back which serves as an office for The Style Foundry, the consulting agency the couple founded in 2010 to specialize in apparel branding, textile and graphic design.

A vintage denim corner, functioning as a source of inspiration for the duo while also offering collectors’ items such as a Seventies Wrangler denim jacket for 75 euros, or $83, is also part of the concept. There are sunglasses by I Spy, jewelry by Josephine Colsen, along with the latest fashion reads in book and magazine form — all niche brands the couple has scouted on their numerous travels.

“Buy a pair of jeans and you will also get a bike clip for free,” is another of the store’s mottos, nodding to Amsterdammers’ obsession with eco-friendly two-wheelers and a healthy lifestyle.

Consistent with their values, the Melgaard-Lewtys built the concept store themselves, producing zero waste during construction. “We literally had two screws left in the end,” Neil said, before demonstrating how the slick wooden furniture turns into a playful window display at night.

A Web site is slated to launch before the end of August.