The show served as a platform for the launch of new performance fabrics and new progress on stretch, with the market responding to the rise in popularity of ath-leisure looks and the impact they’ve had on a challenged jeans market. 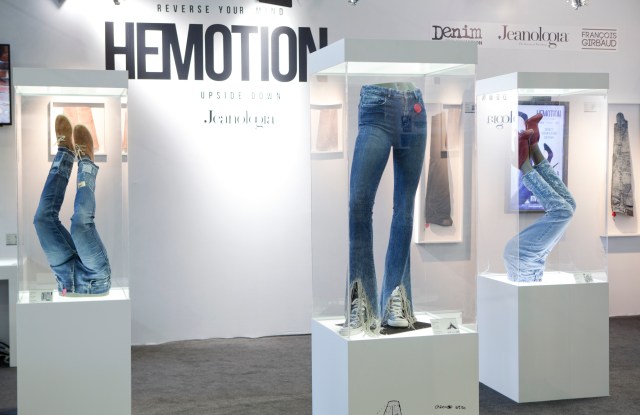 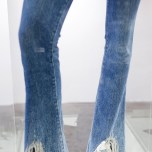 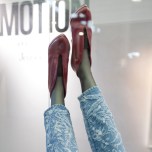 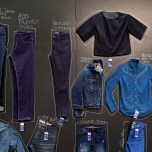 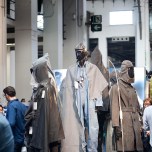 BARCELONA — Buyers at Denim by Première Vision wrestle with just how much innovation they can bring to jeans.

The fifth edition of the show, held at the Montjuïc exhibition center here last week, served as a platform for the launch of new performance fabrics and advancements in stretch, with the market responding to the rise in the popularity of ath-leisure looks and the impact they’ve had on a challenged jeans market.

Buyers didn’t appear totally convinced by the commercial appeal of the athletic interpretations of jean silhouettes seen in recent seasons. But they seemed to be picking up subtle sportswear influences in the fabrics, with bi-stretch in varying percentages and focusing on the warp, 360-degree stretch, and performance materials with properties including heat transfer, strengthened abrasion resistance, antimicrobial and antistain.

The number of brands that showcased denim on their women’s runways recently — including Stella McCartney, Sonia Rykiel and Alexander Wang — indicated the renewed importance of the fabric in today’s fashion market. A new generation of labels such as Vetements, Off-White, Y/Project, Marques’Almeida and Faustine Steinmetz are also using denim in novel ways.

Bi-stretch fabrics were ubiquitous at the fair, as was the focus on comfort. Trends for fall 2017 included rigids, heavier fabrics, open-end fabrics, natural washes and a color palette of green, blue and black. Taking a cue from Vetements’ relaxed-leg jeans made of two different pairs sewn together, there were trompe l’oeil details, asymmetry and color blocking.

Alex Gray, senior director of design at Gap 1969, praised Calik Denim’s Circular Elastech fabric using Invista’s Lycra DualFX fabric in the warp and weft for a full range of motion and recovery. It was designed to avoid the bag and sag effect that’s traditionally associated with high-stretch fabrics and the puckering on the waistband, back and front pockets, and seams.

Buyers also saw potential for women’s fits in Calik Denim’s new Curve technology which has 10 percent stretch along the weft and almost 50 percent along the warp for a slender look and a push-up effect.

Henry Wong, director of product development at Pakistani mill Artistic Fabric Mills, said of bi-stretch, “The maximum we can see now is about 30 percent of stretch along the warp. When it can reach 40 percent, it will resolve the problem of back gaping….Until we come up with something more exciting, the price tag you pay for it might be better used in better quality fabrics featuring Tencel and modal.”

Artistic Fabric Mills presented a line of post-consumer waste denim jeans made with a new shredding machine that transforms discarded jeans into new yarns, fabrics and garments. Buttons and rivets are made from old soda bottle caps.

“We have to be disruptive. We can learn from the start-up culture to bring high-end performance into the denim industry,” said Neil Bell, global research and development and innovation director for Artistic Milliners, based in San Francisco. “We can look at what people like NASA are doing. We want to create the fiber of the future to make the denim of the future. It can mean properties such as heat transfer, strengthened abrasion resistance, comfort, well-being.”

Jeanologia, the Valencia, Spain-based producer of eco-friendly finishing equipment and technology for denim and other textiles, teamed with industry veteran François Girbaud on a display called “Hemotion” that highlighted the lower half of jeans. Beyond the frayed hems and bottom cuffs, there were laser patterns, cutouts and top stitching.

“It’s about showing how far we can go with laser and [Jeanologia’s] Wattwashes. The possibilities are endless,” said Girbaud, pointing to a jean bottom resembling a top, wearing a white lab coat. “We can re-create the broken stitches I invented in 1981 but differently.”

Industry players praised the display. Tricia Carey, director of global business development apparel at Lenzing Fibers, said, “They’re looking at things upside down. Normally people pay attention to whiskers, in the front, what’s happening in the pocket and back area. It’s about what you can do at the bottom and cut it in a different way. It makes sense. To me it’s very commercial. I would go and buy a pair of jeans because they have details at the bottom, but I am not going to buy a new pair of skinny jeans because I have enough.”

One model on display was from Japanese mill Toray, featuring Lenzing fiber from its Carved in Blue 4S collection. Another popular display was Turkish mill Orta Anadolu’s collaboration with Douglas Gunn and Roy Luckett, cofounders of The Vintage Showroom in London, in a showcase where the duo reinterpreted rare utilitarian and military garments using Orta Anadolu fabrics.

Buyers were pleased overall with the show’s offer.

“It’s about how far you can push the product and the added value,” said Crystal Kim, senior designer at G-Star Raw. “We are going back to rigids. The silhouette is loosening up, although women’s stretch will always be important.”

Nicolas Prophte, sourcing director at Pepe Jeans, said, “It’s all about the Eighties inspiration with natural washes and the salt and pepper effect. We’re going toward more rigids for women and more stretches for men.”

“We used to see a variety of weights ranging from 10.5 ounces to 11.5 ounces. Today we see a lot of 14 ounces,” he said. “Going along with the rigid, we see more regular fits. Artistic Milliners had a lot of good trends. Also black used to be very season-oriented, for winter. We see a lot of black all yearlong now.”

“In Debenhams we already offer jeans with Invista’s Coolmax and heat-controlling properties, but the antistain innovation would be a step up for us,” said Mathews, referring to antistain jeans from U.S. based Odo Denim with self-cleaning properties that reduce the need for frequent washing.

Denim makes up about 12 percent of the British retailer’s business and is growing. The two women said key trends at the show included strong textures, Seventies-inspired stone washes, rigids, and a color palette of greens, overdyed blue and overdyed black.

Show director Chantal Malingrey-Perrin said she would like to see the gap narrow between innovation and more commercial products, adding, “The price point is the major hurdle, but brands have come to realize that there’s a real need for differentiation.”