Innovation Served Up at Bread & Butter

The three-day trade show drew about 100,000 visitors to Tempelhof Airport in Berlin. 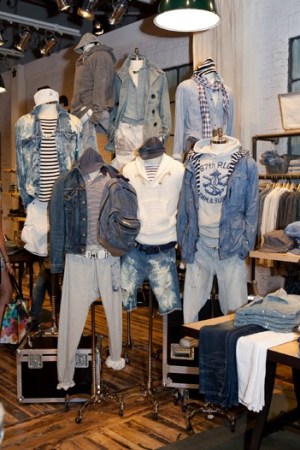 BERLIN — No risk, no reward.

That was the approach at Bread & Butter, as manufacturers experimented with unusual silhouettes, tested new treatments and played with green ideas for next season. The three-day trade show, which drew about 100,000 visitors to Tempelhof Airport here, ended Friday.

“Everyone is actively trying to get some denim business back while the chino is still so strong,” said Kelly Rowlands, a British buyer from Footasylum, which has more than 20 branches in the U.K. “So there’s a lot of experimentation going on right now.”

However, buyers were apprehensive about brands’ level of risk-taking. Rowlands lauded more safe midlevel washes and Marie-Christine Assmann, a buyer from Peek & Cloppenburg, added that the flared jeans, which popped up in many spring collections, “will only spread slowly among fashion-informed customers.”

“We’ll focus on clean washes with pleats, narrow at the thigh and flared from the knee downward,” she said.

Nevertheless, many brands that are in a rebranding or repositioning phase were making generous use of the bell-bottom style. Wrangler started to rejuvenate its image last season and is releasing three new Seventies-inspired flared shapes. Mustang is also redefining its brand image and was inspired by Elvis Presley’s style for spring, and the new Denim & Supply Ralph Lauren brand is in a decidedly hippie mood for its debut season, pairing flared, sun-bleached jeans with wild, colorful prints and gingham patterns. Denim & Supply Ralph Lauren is planning to open stores in London, Tokyo and New York in the spring and aims to get a further 30 monolabel franchises on board.

“Jeans have either been ripped or clean for the past few seasons, so bleach is something new,” said Alex Kobbevik of Modo, a retailer from Aalesund, Norway. “It’s an easy trend to translate.”

Tiger of Sweden, for example, is coming out with 40 new washes, including numerous bleaches.

Prps, based in New York, has always been about jeans washes. So in a season when washes are big news on a commercial level, the brand is introducing a slightly lower-market diffusion line called Prps Goods & Co. Retailing at around 250 euros, or $356 at current exchange, the 77-style collection is targeted at 200 doors to start.

“A lot of manufacturers have reinvented the jeans product in their collections for next season mainly via special wash treatments,” said Assmann.

At AG Adriano Goldschmied, even white jeans went over well with retailers. Frances Bentz of Modehaus Bentz, a 4,520-square-foot fashion door in Saarbrücken, ordered white flared styles at the stand.

“I do believe in white jeans,” she said.

Indicative of the season’s risk-taking approach are Lee’s short-sleeve Hawaiian-print shirts for men. The brand’s senior product manager, Ralf Tulleneers, confided, “We had a long discussion about them.”

Denham launched an airy silk butterfly-inspired blouse for women, as well as lightweight chambray jeans at the fair.

Another new category from the Amsterdam-based manufacturer is foam-dye jeans, lending the styles a satinlike optic.

“It is cotton though,” assured de Hond. “We don’t believe in heritage, it’s about innovation.”

GAS launched a capsule Tencel collection, including soft shirts and slouchy trousers, while Mavi’s design manager, Güney Ekrem Oktar, lauded Tencel as an “up-and-coming fiber,” placing it within the Turkish brand’s collection. Mavi also installed a dedicated denim kitchen at the fair, inviting visitors to get creative themselves applying glue sticks and paint brushes to its jeans — be it regular pairs or recycled ones made from wasted cotton, a new line for spring.

Green initiatives were abundant at B&B. Levi’s drew retail crowds to its assortment of Waterless jeans, available in 64 finishes across all styles.

Lee is taking eco-conscious steps by reducing labels on its back pockets. “It’s a small thing, but it still makes a difference. We’re looking into all angles of our business,” said Lee’s Tulleneers, who pointed to Scandinavia as the brand’s biggest market. “There’s a typical denim culture” there.

Hilfiger Denim’s senior vice president, Franck Belochi, said, “Our Scandinavian clients expect this,” referring to the chemical-free and less-water capsule jeans collection the label is introducing for spring. “This is the time to try things out and find a green recipe. The next step would be a fully organic collection.”

Another key market for Hilfiger Denim, China, is severely lagging behind the eco trend, raising some questions about the financial relevance of green denim. But Belochi explained that “it’s an educational process” that will eventually reach China. The retail price for the eco-friendly pairs is the same as for regular denims, starting at 99 euros, or $139, which is important for the customer and doable as a brand, argued Belochi.

“It’s about development,” he added. “It’s one year of trying out techniques,” noting that the brand is adding its own chemical-free laundry detergent named Tommy Wash for spring.

Across town at Premium, vendors were testing new waters, too. Notify is trying out a tie-dye pattern on its lightweight flares for spring, which received mixed responses.

“But that’s part of who we are,” said Notify’s sales manager, Patrick Ohayon. “We experiment a lot. Some treatments are dead after a season, some create new spirits.”

Adidas SLVR introduced colored denim, while Armani Jeans was present with a huge 5,489-square-foot sleek showroom space and its own peaceful garden unit.

“The Premium organization was excellent and offered us great atmosphere,” stated Fabio Mancone, worldwide director of communications and licensing for the Giorgio Armani Group. “A great success.”
The same could be said about the mood at Bread & Butter, which was upbeat throughout and extended all the way to the city’s Mitte district where, as part of the fair’s “Super Nights,” shops stayed open until 10 p.m., prompting retailers to throw their own parties. Cora Schwind, owner of Eastberlin, a streetwear store in the neighborhood, had 1,000 guests attend her shop event on Thursday night.