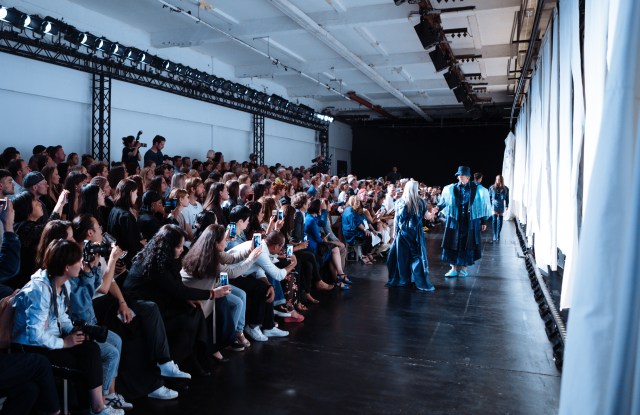 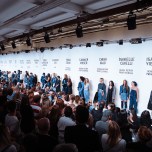 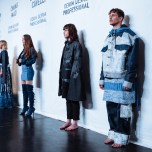 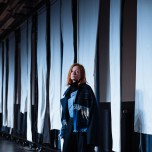 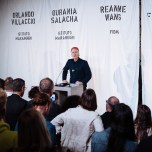 Denim maker Isko held its annual student denim design awards in Berlin on Wednesday night. This is the sixth edition of the event, named Isko I-Skool, launched in 2013, but the first to be held in the German capital. Previously the ceremony has been held in Italy. “We wanted to make it a bit more international,” Ines Kordic, the London-based public relations manager for the company, said.

Isko is one of the world’s largest producers of denim fabric, with representation in 35 countries, and for those who participated in the contest, the lively evening at a Berlin riverside venue, Glashaus, ended something of an international journey. Competitors were drawn from 11 of the world’s leading fashion schools, among them Polimoda in Florence; the Beijing Institute of Fashion Technology; Germany’s Akademie Mode and Design, and the Fashion Institute of Design and Merchandising in Los Angeles.

Rosey Cortazzi, Isko’s global brand director, estimates that the judging panel whittled an initial 250 entries — which included, for the first time, young professionals already working in the business — down to 17 finalists. This year’s brief was to design a six-piece capsule collection that spoke to the theme of what organizers named a “new denim code.” Students were encouraged to pay attention to different body shapes and cultures.

After a short list was chosen, the designers came together for a three-day educational and experimental workshop in Italy, where they trained using Isko’s advanced technology and fabrics. Isko can produce 300 million meters of fabric a year using 2,000 high-tech looms and has pioneered several aspects of supply chain sustainability.

“We all know how damaging the denim industry is and this company has realized that they have to give back,” Francisco Costa, former women’s creative director at Calvin Klein and one of the night’s judges, told WWD.

Following the workshop, contestants’ creations and motivating statements were assessed and, on Wednesday night, the finalists’ show pieces arrived on a somewhat experimental runway in Berlin: Performers of all ages and sizes danced, strutted, kissed and fought in front of an around 200-strong audience. They wore denim garments that were patched, seamed, textured, tasseled, printed, deconstructed and braided, among other things. One model drew attention with a huge denim cowboy hat and a cropped denim jacket and jeans, with identical front and back sides. Another sported an intricately plaited cowl and hood in denim and a further attention-getting outfit featured bright turquoise shoulder pads with fringing, over denim.

The competitors were awarded their prizes alongside the evening’s master of ceremonies, a cheery, gap-toothed Matthew Modine. The “Stranger Things” actor, who is known for his activism, had come from Mississippi to be in Berlin, he said, “because of the work that Isko has done in environmentalism,” and because “the world we are leaving to our children and our children’s children must be the place filled with hope that we were born into.” After that emotional exhortation, Modine lightened the mood by explaining how he’d just lost his front tooth in a skateboarding accident.

During their time in the workshops, the competitors showed a lot of interest in sustainability, said Cortazzi, who had been present at the final judging session the previous day, as well as experimenting with washes, laser-cutting and finishes that changed the fabric’s texture.

“In terms of other broad trends, the participants were really interested in a more democratic vision of fashion,” Cortazzi told WWD, with many of them designing for body shapes that are not always well-represented in the fashion industry. “One student designed for her handicapped sister, others designed denim for an older person and for pregnancy. Their designs were really reflective of diversity,” Cortazzi said.

“The other noticeable trend was a focus on adaptability,” Cortazzi continued. For example, one student — Bilge Hakan Gurkaynak of Polimoda — made jeans that had both a high and low waist, with the high waist able to be zipped off. Gurkaynak was rewarded for his efforts with a year’s supply of zippers and buttons from Italian fashion detail company Riri.

The big winner of the night, though, was Chinese student Xiaohui Lyu, who won three of the seven prizes on offer, including that for best overall student.

“She was the most concise and had a comprehensive vision,” judge Sara Sozzani Maino, deputy editor of Vogue Italia, explained; she chose Lyu for the Vogue Talents award. “It was something people could actually wear, she already had a marketing plan and I could already see how she would develop a whole new collection from it.”

Cortazzi said the next step is trying to ensure that all the finalists gain sponsorships or get internships.