Companies are hoping 2011 will see an upturn in profits as they adapt their styles and invest in research and technology. 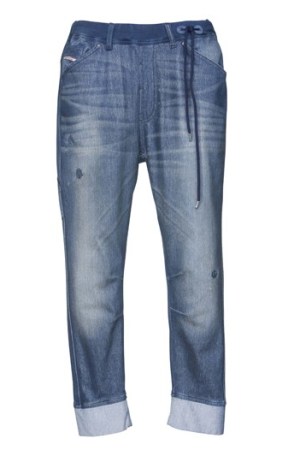 MILAN — Hurt by high raw material and energy costs and by fashion trends that last year favored dresses, skirts, leggings and chinos, Italian denim firms are cutting their profit margins while continuing to invest in research, style and technology.

“If there are technical content, the right fit and sophisticated washes, the product leaves the store, even if it’s pricy,” said Giovanni Petrin, general manager at Veneto, Italy-based Martelli. “There is an increased request for unique and special pieces.”

Martelli, which treats and washes denim for major brands ranging from Diesel and Replay to Dolce & Gabbana and Versace, cited strong performances with three-dimensional treatments with strongly accented whiskers.

Diesel owner Renzo Rosso conceded that women “were distracted by other categories last year and suffered compared to the men’s division, which grew 20 percent last year.” The company introduced its “jog jeans,” a line that “looks like denim but is actually jersey” to play the comfort card. Diesel has been rejiggering its women’s division and will present its fresh look, overseen by new designer Heikki Salonen, for spring 2012.

Exports of Italian jeans in 2010 totaled 773.3 million euros, or $1.02 billion at average exchange rates, up 5.3 percent compared with the previous year.

Augusto Romano, general director of the Puglia, Italy-based Meltin’ Pot, agreed that there was a strong discrepancy last year between men’s and women’s shopping habits.

“Women were more into other merchandise, but it’s part of fashion’s cycles,” said Romano, who sees a pick up in business in 2011.

A key item for spring has been the MP001, a “very aggressive” five-pocket jean, with novelty treatments. Romano is also counting on a “structural change” in distribution, with too many small stores dispersed throughout the country that “follow trends rather than setting them” and malls that have “too low an image.” Meltin’ Pot is set to open its first store in Riccione, on Italy’s Adriatic coast, this month.

“This growth has come predominantly from Italy and France, where the markets are performing well and for the forthcoming season we expect to see the same from Germany,” he said. “The USA is at an image-building stage right now and with very good prospects for the future.”

Moreno Giuriato, president of manufacturing company Italservices, which produces the Met and Cycle brands, said revenues in the year ended March 31 were up 24 percent to 87 million euros, or $114.8 million. Giuriato believes “the market is demanding alternative, more fashion-oriented products, and high-end denim, which is the core of our business.”

He said fall orders are up 33 percent. He conceded the increase in cost of raw materials and labor was “a problem” that impacted the company’s own prices by about 4 or 5 percent. For this reason, Italservices has expanded with new, more affordable pieces, such as a capsule collection called Met Chinos and Friends. In addition to being available at 60 points of sale in the U.S., the company opened a store in Miami this spring.

“We are very happy with business there, it’s a constant growth, and we see that European-style denim is spot-on for American customers now,” said Giuriato.

Prices are important, but not essential, he contended. Replay, which plans to open a 10,000-square-foot flagship in Barcelona this month, marks its 30th anniversary this year and will launch a new Replay Thirty model to celebrate the milestone.

“It will also be produced in the U.S., and is a celebration of denim and of its origins,” said Sinigaglia.