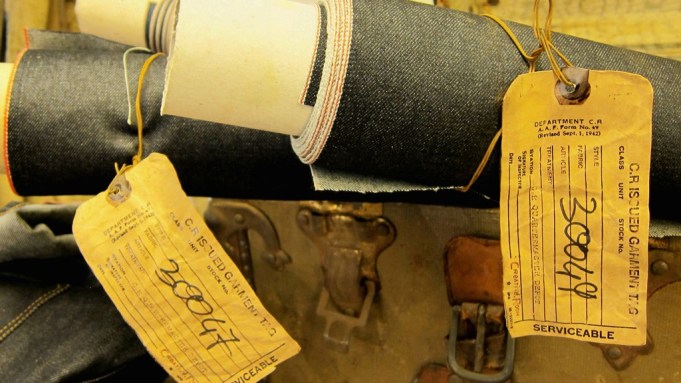 MILAN — Denim companies in Italy’s Marche and Veneto regions pride themselves on being international textile hubs. As the euro zone crisis lingers and consumption in Italy continues to decline, however, they’ve been forced to adapt to foreign competition and meet changing customer demands.

According to a European Textile and Apparel Association report, exports of Italian textiles totaled 27 billion euros, or about $36 billion at average exchange, in 2011, up 9.4 percent over 2010. While the majority ­— 56.4 percent — of exports were intra-European Union, demand from non-EU areas was growing at a faster rate, up 14.2 percent in a year. However, the number of Italian textile companies dropped by an average of 2.3 percent in the same period, or by roughly 1,200 business units. The total number of employees decreased by 2.6 percent, a loss of about 11,700 workers.

Here, an update on the Marche and Veneto regions and the health of Italy’s denim districts.

Nestled in the Marche region, the medieval town of Urbania is the beating heart of central Italy’s “Denim Valley.”

The concentration of denim companies in the Montefeltro valley dates back to the Seventies, when local entrepreneurs started producing jeans and opening washing and finishing companies. According to a case study published in 2010 by University of Urbino’s online newspaper, in the mid-Eighties Urbania-based firms were producing about 40,000 pairs of jeans a day for labels such as El Charro, Trussardi and Carrera.

The district began languishing in the Nineties, as brands moved production to low-cost countries such as Romania. Recent euro zone woes have worsened the health of Denim Valley, and many companies closed, including Italian Fashion in 2009. The company, which in 2003 reported revenues of 23 million euros, or $26 million at average exchange, used to produce for a number of international brands, including Fiorucci, Kookai, Swish and its own brand, Maggie.

According to Cerved Group, which evaluates companies’ solvency, 6,500 firms in Italy filed for bankruptcy in the first half of 2012 and 14.3 percent of them were based in the Marche. Data from Confindustria Pesaro Urbino, the province’s association of industrial companies, shows that in the second quarter of 2012, the Pesaro Urbino area, which includes Urbania, registered a 5.7 percent decrease in industrial production compared with the same period last year, with sales dropping 0.7 percent.

“The general situation is not positive for most companies, which are registering a drop in revenues and seeing the profits of previous years transformed into losses,” said Corinna Sperandini, vice president of Confindustria Pesaro Urbino. She attributed the decreased turnover to foreign competition from Turkey, North Africa and Asia.

Sperandini said the crisis hit manufacturing companies and those with more specialized services. “Although the Italian denim industry is a leader in washing, now even the companies specializing in these kinds of treatments are suffering because of high costs,” she said.

The region is facing an unemployment crisis: Confindustria Pesaro Urbino data show that hours of cassa integrazione, a government-funded leave, saw a 34.3 percent increase in the second quarter of 2012 compared with 2011. “Skilled workers manage to find new jobs in similar sectors, but those with no specific training are still unemployed. After the closure of many companies in the region, only 20 percent of employees found a new job in the same industry,” Sperandini said.

A few miles from Urbania, clothing brand Siviglia, which has a denim division, said business was good: the company closed 2011 with revenues of 42 millions euros, or about $56 million at average exchange.

“We were born in 2006 when the crisis was around the corner, but since our foundation we have seen our revenues constantly increase,” said Cesare Bianchetti, Siviglia’s marketing director. “We are perceiving that our clients have been hit by the crisis, so we aim to consolidate our business in Italy and develop commercial relations abroad this year.”

The northeastern Veneto region is not only famous for its beauty — it is home to Venice, one of the most visited cities in Italy — but also its music, art and vibrant textile industry, which is experiencing many of the same problems as the Marche further south.

Flavio Berto, ceo of Berto Industria Tessile and president of Padua’s fashion and textiles branch of Confindustria, said he had seen a dip in the number of textile companies that were members, which he attributed to firms going out of business. “I thought it would be worse, but Veneto is holding its own. Still, there are some companies disappearing from the registry,” he said.

“Everyone knows the situation in Italy is difficult right now. There is no consumer confidence, people are watching their spending,” said Daniela Riccardi, ceo of Diesel, which is headquartered in Breganze, in the province of Vicenza. She noted that Diesel has offset sluggish figures in Italy with strong results abroad, in northern Europe and growing markets such as Korea, Brazil and Russia. “Although our founder [Renzo Rosso] is from Veneto and we are based here — with all the benefits that entails, Veneto is full of hard-working visionaries — we are a global company,” she said.

“What has changed is the client’s approach to the market,” said Marco Lucietti, marketing director of ISKO, the world’s largest denim production company, which serves about 200 companies in Italy. “Brand clients are working hard to meet new demands, they need to deliver their products quickly,” he noted.

Lucietti said client requests vary greatly by geographic area, and, in the face of the crisis, ISKO is investing in proposals tailor-made for individual brands.

Berto Industria Tessile, based in Bovolenta, in the province of Padua, began making the cloth for sails on Venice’s boats in the 19th century, before moving on to home textiles, shirting fabrics and, in the early Eighties, denim, which has become the firm’s specialty. The company does its own spinning, dyeing, weaving, finishing and rolling. Flavio Berto, a fourth-generation family employee, said the biggest competition for Italian denim companies now comes from Turkey, followed to a lesser extent by countries such as Pakistan and China.

“In the past, Turkey focused on quantity. Now, more and more it offers products of quality,” he noted, adding that price competition with Asian countries is “a lost battle,” as operating costs in Italy are far higher.

Giovanni Petrin, general manager of Martelli Lavorazioni Tessili, which specializes in dye-works and laundry and has a plant in Vedelago, in the Treviso province of Veneto, said Turkey has a rich textile culture that its government is actively supporting.

“The textile sector made Italy famous, it built up our GDP [gross domestic product], and we’re not protecting it,” he said, adding that Turkey’s non-EU status spared it from following stringent European regulations.

Petrin also said many small textile laboratories had shuttered across Italy, or, if they still existed, were frequently run by Chinese immigrants — who may be familiar with the textile business, but not with Italian craftsmanship.

Michele Ruffin, ceo of Okinawa, a labels, belts and accessories company based in Montagnana in the province of Padua, said Italian brands are still unrivaled for their creativity and workmanship.

“One of our weaknesses was moving a lot of production processes out of Italy to make greater profits, believing that we could replicate the knowledge and manual skills of our artisans. This proved to be damaging both for the market and for the quality of many products,” he said.

Surviving companies in the Veneto region have focused on more “exclusive, polished offerings,” and have built up an international portfolio of clients, said Berto. “Veneto’s textile companies are moving away from mass-market products and over the past several years have been researching and carving out specialized niches,” he said.

Okinawa, for instance, has been investing in the luxury sector and focusing on attracting foreign customers. “Our clients are very demanding, both in terms of product quality and performance, and in terms of the respect of increasingly restrictive eco-toxic parameters,” said Ruffin.

Among Okinawa’s innovations, Ruffin listed a group of materials and processes he calls “Eco Family.” Cellulose-based Jacroki, patented as both a material and as a production process, exists in three versions: racy, soft and shine, each with a different texture and look. Suitable for labels, tags, belts, bags and clothing, Jacroki can be washed, ironed, creased and even embroidered. Hydroki, a chrome-free, water-resistant leather, can be machine-washed or dry-cleaned and the company expects it to soon have OekoTex environmental certification.

In addition to offering quality, as a fashion center Italy anticipates market trends in denim, observed Lucietti, describing the interplay between “Italian taste, and the fact that Italian taste has a major impact on global taste in fashion.”

“Italy continues to be a country with enormous potential, we continue to have very strong brands,” said Riccardi. “Whether they are from Veneto or the Marche or anywhere else, we are Italian and we have a sense of style that remains on the cutting edge in denim.”

Ruffin believes that to remain competitive, Italian companies should keep all phases of product design and production at home. “Only in this way is it possible to guarantee levels of excellence in the final product,” he noted, adding that government incentives would be needed to lure back Italian companies that had set up shop across the borders.