The quickly growing denim brand has hired Morgan Stanley to explore a sale or even an initial public offering. 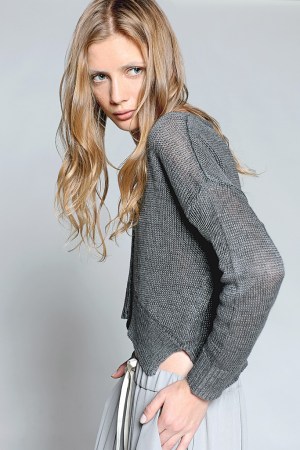 J Brand is testing the waters to gauge its worth.

The quickly growing brand has hired Morgan Stanley to explore a sale or even an initial public offering, sources said. The company — which has estimated annual sales of more than $100 million — is currently majority owned by Star Avenue Capital, with a minority held by founder and chief executive officer Jeff Rudes.

The move comes as J Brand is working to bolster its credentials as a fashion house. This year the eight-year-old company made the leap from its denim roots into ready-to-wear. Bergdorf Goodman, Saks Fifth Avenue, Neiman Marcus, Harrods and Holt Renfew all carry the new line, with prices that range from $200 to $1,500.

The business could be a good fit for larger strategic players looking for growth or for a private equity investor who could help move the wholesale brand into retail before flipping it. J Brand is sold through 1,500 U.S. doors and 1,000 stores abroad. Annual sales are growing at a double-digit clip.

The brand is spending more than $1 million for a fall ad campaign put together by Karl Templer and Craig McDean that will feature its rtw offerings.

J Brand is looking to build shops-in-shop that would open in the second quarter next year and is contemplating its first flagship. “We’re setting the stage to be the platform of growing a fashion brand,” Rudes said.

Peter Boneparth, chairman of J Brand, and Paul Lattanzio, president of Star Avenue, declined to comment on the strategic review, which was first reported by Reuters.

“They’re a fantastic brand,” said Jeff Streader, former Guess Inc. and VF Corp. executive and operating partner at Marlin Equity. “They resonate with their consumer and they don’t stray too far from what made them successful in the beginning, but they continue to bring innovation to the marketplace and I think the consumer recognizes that.”

Streader said it was more likely that a strategic player such as VF would buy the company rather than another private equity firm, which might not be willing to pay as much given the outlook for the global economy.

The Institute for Supply Chain Management said Monday that economic activity in the U.S. manufacturing sector last month contracted for the first time since 2009 amid worries that global demand is decreasing. China’s economy is slowing down and Europe is tilting toward recession.

“With demand down, people are nervous, especially when you’re at these premium price points regardless of what the product is,” Streader said.

The economy might cause some investors to be less aggressive, but it seems there is always some appetite for fashion brands that have both proven they have a place in the market and also have room to expand — the question is whether sellers can get the price they want.

Michael Kors Holdings Ltd.’s December IPO not only put the designer on track to becoming a billionaire, it also forced people to reevaluate just how warmly fashion brands can be received by the market. The privately held Tory Burch is also seen as a hot commodity, although the designer continues to insist an offering is not in the brand’s immediate future.

The much-anticipated and then widely panned flop of an IPO that Facebook Inc. staged in May cooled the market for new offerings, but things seem to be heating back up.

Last week, Coty Inc. decided to dip its well-pedicured toe into the water, filing for an IPO that could raise $700 million for current investors. The beauty firm has a host of celebrity and designer fragrance licenses including Calvin Klein, Marc Jacobs, Chloé, Roberto Cavalli, Balenciaga and Bottega Veneta. Coty is looking to expand into new markets — something it had earlier tried to do in a failed bid to acquire Avon Products Inc.

The trick for Coty and J Brand, should the company ultimately go the IPO route, will be to convince investors that they are just at the beginning of their growth paths — and thus have stocks that investors would want to own.