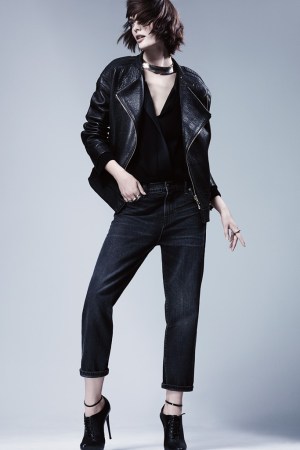 This story first appeared in the October 9, 2013 issue of WWD. Subscribe Today.

“Our business is growing and our fall season is one of the best — if not the best season — of retail we’ve ever seen,” said the executive, who hosted a dinner for Japanese fashion editors.

Rudes declined to give sales figures and said it was too soon to talk about the brand’s retail expansion plans beyond the Osaka store. He told WWD in August that the firm was negotiating for a location in Los Angeles, to open by next summer, and a New York site expected to bow by the end of next year. He provided no further details on plans for the brand’s retail rollout during his visit here.

Japan’s Fast Retailing Co. Ltd. purchased a majority stake in J Brand for $290 million late last year. While Rudes described the Japanese company as a great partner, he said his company has retained its independence like other Fast Retailing subsidiaries Theory and Helmut Lang.

“Nothing has changed. We’re on the same health plan as Theory,” he said with a laugh. “[Fast Retailing is] letting us do what we do best.”

The 215-square-foot Osaka store, located in the Hankyu Umeda department store, opens today and complements the brand’s 120 wholesale points of sale in Japan, where the company recently set up its own subsidiary to manage the business.

Rudes said the store gives the Japanese consumer a sense of the brand’s “breadth” in terms of its denim and ready-to-wear.

“For denim, it’s known as a very up-to-date, forward market, especially in the fashion sense,” he said, adding that the brand’s slim-fitting jeans and apparel work particularly well with Asian consumers. The average Japanese retail price for a pair of jeans is 19,000 yen, or $195, in line with that in the U.S.

Elsewhere, Rudes said the brand is doing brisk business in China, where it has a presence in Beijing through Lane Crawford and seven stores in Shanghai through denim retailer O’Blu.

“We do a very nice business at very high prices,” he said, noting that J Brand’s jeans generally retail for between $400 and $500 a pair in China, due to high retailing costs and a generous mark-up.