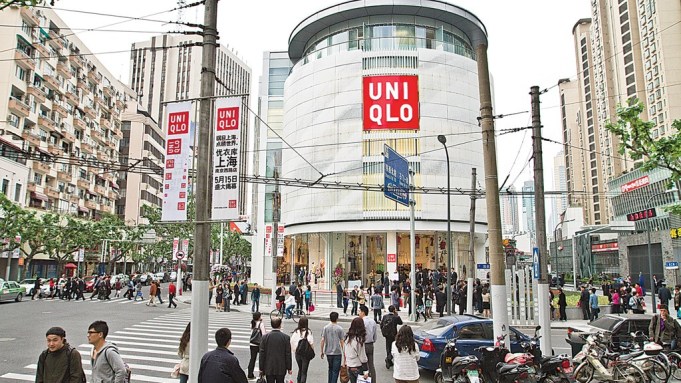 TOKYO — Luxury and premium denim brands from around the world have long looked to Japan for production of top-quality jeans in the most novel and technologically advanced finishes, but the country also represents a denim market that, while gradually decreasing in size, remains robust.

While the overall market size has fallen, Japanese retailers and manufacturers say that this does not necessarily mean the number of pairs of jeans sold has decreased. On the contrary, many attribute the market contraction to the increasing popularity of fast-fashion and cut-price jeans that have flooded the market in recent years.

One company in particular that is gaining ground in Japan’s denim market is Fast Retailing Co. Ltd., parent company of fast-fashion brands Uniqlo and G.U. Its share of the total jeans market climbed to 4.7 percent in 2011 from 3.5 percent in 2006, outranking companies such as Edwin and Levi Strauss & Co. Looking only at the economy jeans market, Fast Retailing jumped to an 18 percent share in 2011 from 14.2 percent in 2006, according to Euromonitor International. In comparison, Shimamura, the company with the second largest share of economy jeans, had only 4.8 percent in 2011.

In the overall Japanese jeans market, another local manufacturer, Edwin, ranks as the number-two company. It commanded 3.2 percent of total market share in 2011, unchanged from 2006.

“If you look at the market, I think Uniqlo’s jeans sales are about 40 billion yen [yearly, about $499.44 million],” said Hidekazu Hosokawa, director of Lee Japan, which is licensed here by VF Corp. and belongs to the same group as Edwin. “The amount of sales in yen isn’t much different between Uniqlo and Edwin, but because [Uniqlo] is cheaper, they sell about three times more pairs than Edwin.”

“From the time Beams was founded [in 1976] until the beginning of the Nineties, there were hardly any fast-fashion retailers in Japan, so everyone stretched their limits, saved money and bought imported or other expensive jeans,” he said. “But I think now the average person doesn’t spend that much on fashion.”

In addition to the rise of lower-priced denim brands, it is notable that few international brands hold a substantial share of Japan’s jeans market. Levi’s is the biggest, with a share comparable to that of local brands Right-On and Edwin. Next come Wrangler and Lee, both of which are licensed by VF Corp. While Wrangler occupies a similar place in the market to the one it does in the U.S., Lee is decidedly more fashion-forward in Japan and is priced higher. An average pair of Lees here cost around 12,000 yen, or about $150. The offering, designed and largely produced in Japan, is completely different from its U.S. counterpart.

Hosokawa said the lack of major international brands in the market presents a significant opportunity for such companies, but he warned that in order to succeed, it is important to fully understand and cater to the Japanese customer.

“If you want to grow your business…it’s necessary to make things for Japan that fit with the market,” he said.

Yuko Onuma, a women’s buyer for the chain of multibrand stores Beauty & Youth United Arrows, which targets consumers in their 20s to early 40s, said Lee, which she counts as a domestic brand, is the best-selling denim name at her stores. Among smaller international brands, she said Rag & Bone has been strong recently. She attributes this to its popularity among international and local celebrities.

Onuma and Kubo agree that Japanese customers, when buying jeans, are concerned with more than just price, status symbols and origin.

“I think it’s the sense of security they get from the brand name, especially among women,” Onuma said. “After that, I think it’s the silhouette when wearing [the product] and the appearance of the design.”

Kubo has similar sentiments when speaking about his male customers.

“More than the difference between Japanese and international brands, it’s about silhouette, color — the essence of the product, not the brand,” he said. “Now there are more people who focus on the look of the product than the way it was made.”

Even while economy brands and single-brand retailers gain ground in Japan’s denim market, some of the country’s coolest multibrand retailers, including Beams and United Arrows, are also seeing increased denim sales. At Beams’ men’s flagship in Tokyo’s Harajuku district, for example, Kubo said sales of jeans have increased by about 5 to 10 percent in recent years. He attributed this to the natural versatility of the product.

“There are lots of types of bottoms, like chino pants and slacks, but denim is the material that adapts to trends most easily, and it’s easy to wear and care for,” he said.

Onuma painted a similar picture of Beauty & Youth United Arrows, saying sales of jeans continue to increase each year, even if only by a small amount.

“The denim market [in Japan] is evolving,” she said. “For example, the development of things like thinner fabrics and microfiber fabrics, which feel good when worn and fit well, matching the shape of the legs. Because of the strength of material development, things have evolved. And there are more variations — skinny, boot-cut — so customers are also buying more.”