Spanish firm zeroes in on sustainable substitutes for washing and sandblasting. 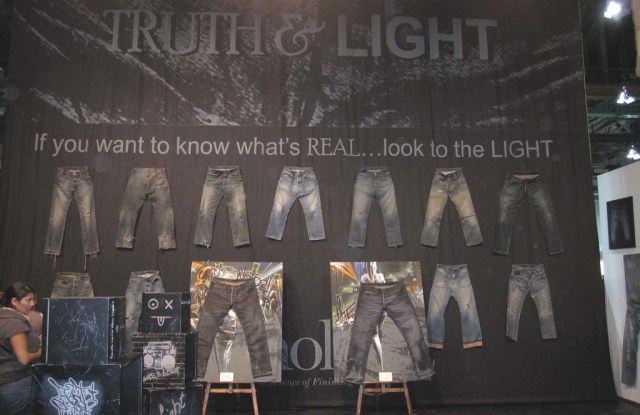 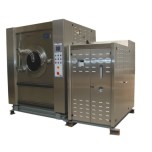 Jeanologia, a family-owned garment finishing company based in Valencia, Spain, operates under a “3E” motto — ecology, efficiency, ethics — and is dedicated to changing the denim manufacturing system.

“When we go into finishing, everything is about trying to reproduce the ‘passing-of-time’ look on jeans,” said Enrique Silla, Jeanologia president and founder. “We believe that the future is to be able to produce a garment at a low [ecological] cost but without compromising the look of the garment.”

In 1999, Jeanologia developed its first laser finishing process that eliminated the need for manual scraping and sandblasting, known to cause silicosis in workers. The process hit the market in 2001 and gained traction in 2003 when the company started its Laser Factory in Barcelona. In 2008, Jeanologia presented its G2 washing machines, “G2” referring to the two gases oxygen and ozone, that substitute for water.

Jeanologia’s name means “the science of finishing” and its business model is unusual: it develops machines, which it manufactures and markets, and finishing processes that it promotes to designers and manufacturers, who can also request consulting services.

Eco-friendly manufacturing sounds great, but designers won’t sign up unless they are convinced the results are aesthetically pleasing. To achieve precisely the right vintage look, Jeanologia has acquired an extensive archive of jeans from throughout the 20th century. These are jeans that have been worn — in some cases by American World War II veterans who donated their old denim to the Spanish company — and whose wear patterns, color changes and fabric characteristics teach in-house designers about the denim aging process.

Jeanologia’s multidisciplinary team, composed of 80 employees worldwide, is divided between “technocrats” and “fashionists.” Technocrats are finishing experts, textile engineers and software specialists who develop Jeanologia’s equipment and processes, while fashionists are designers and product managers who work on style.

An equipment and electronics factory in Barcelona, several sales and service hubs in Hong Kong, India, Bangladesh, Turkey and Mexico, and showroom offices in New York and Tokyo all support the main development center in Valencia.

The first hurdle for Jeanologia was convincing “designers and denim gurus that with our technology we can produce our denim in a natural way and achieve an even more perfect look,” said Silla.

He credits designers François Girbaud, one half of the French brand Marithé + François Girbaud, and Adriano Goldschmied, a founder of brands Diesel, Replay and AG Adriano Goldschmied who now serves as partner and executive vice president of product development at Citizens of Humanity and GoldSign, with persuading their designer peers that new technologies breed attractive denim.

“The textile industry has a great responsibility,” said Girbaud, a stonewashing pioneer who now regularly collaborates with Jeanologia and is apologetic when speaking of his generation’s “délavé” frenzy. “We didn’t understand what we had started doing. Yes, we screwed up, but we didn’t know it. Now we know.”

Abandoning practices such as sandblasting does not mean sacrificing style, the designer asserted. One advantage of laser technology is that “you are actually engraving, or ‘biting’ into a material, going inside it and changing the surface,” said Girbaud. This allows designers to invent intricate new motifs.

“If you want to do this manually, there will be variations,” he said. “Every worker has a different hand. With laser, you can reproduce identical patterns.”

Petrin added that there is no difference aesthetically between denim washed using eco-friendly machines and denim washed using substantial amounts of water and chemicals. His firm employs laser and ozone hardware and for years have used natural coloring agents.

The greatest challenge lies in convincing more manufacturers, who have been tightening their purse strings in response to the economic crisis, to make an “initial capital investment” for new machinery, after which, Silla said, costs even out in the long term. He declined to discuss specific costs, but market sources put the investment in machinery necessary to produce about 10,000 pairs of jeans a day at about $1 million, generally recoverable in less than 18 months, depending on the local costs for labor, water and energy.

Italy is Jeanologia’s biggest market and Petrin confirmed that there is “something in the air” among Italian designers.

“People are talking about eco-friendly practices,” he said, adding that many companies are quietly reevaluating manufacturing practices.

Marco Lucietti, marketing director of ISKO, the world’s largest denim production company, said Italy’s heavy concentration of textile firms, especially in the Veneto and Marche regions, is a factor. He believes manufacturers need to take a sustainable approach from the beginning of the denim production process, by using only organic or recycled cotton. ISKO’s recent “ISKO for Earth” project, a collection of 25 garments produced in collaboration with ITACLAB washing and GARMON chemical experts, combined organic and recycled cotton with ozone washing treatments, laser finishing and special heat reduction techniques that lower energy and chemical consumption.

“The cloth must have an ecological component from the outset,” Lucietti said.

Gianluca Brozzetti, chief executive officer of Roberto Cavalli, which in October confirmed it does not use sandblasting, describes sustainability as an “essential” value for the fashion industry.

“The consumer has become more concerned with product quality, as well as origin, and the use of high-quality raw materials,” he said. “The client today is increasingly attentive to the value behind personal purchases and is willing to spend significant sums only when faced with a true quality product.”

Silla maintains that teaching consumers about the denim production process gives them a greater appreciation for eco-friendly garments and instills a desire to make careful purchases.

Since 2008, Jeanologia has promoted its technological advances through “Truth & Light” presentations. “Truth” refers to Jeanologia’s archive of “true” garments and “light” refers to laser technology. Attendees view various jeans and guess whether the denim is from the archive or newly produced. Typically, said Silla, they can’t tell.

Past Truth & Light events have taken place in Barcelona, Paris, Munich, New York and Hong Kong and the most recent, on Nov. 7, in São Paulo, Brazil.

“Brazil is a country that loves jeans,” said Silla. “The future of our industry is in new, developing countries.” He cited China, India and Russia as probable future locations of Truth & Light events.