Jeans Fight Back at Denim By PV

Yoga denim, tailored pieces and performance fabrics were among trends seen at the first edition of the trade show in Barcelona. 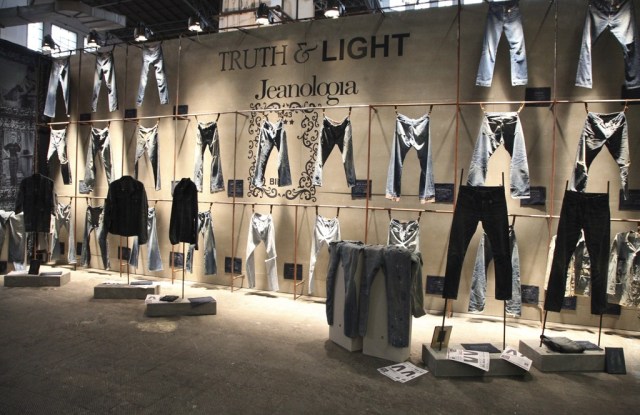 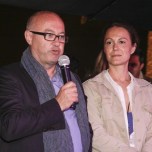 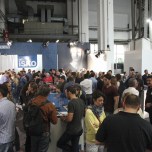 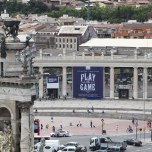 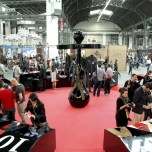 Held May 21 and 22, weeks after the first Kingpins supplier show and related Denim Days in Amsterdam, exhibitors and buyers picked up where they had left off at the last Denim by PV in Paris, seeking ways to inject newness into the denim market even as it sought casual, comfortable alternatives to jeans as their dominance has dwindled in recent seasons.

Among key trends for fall 2015 were activewear denim, clearly inspired by yoga pants, and chic tailored pieces in denim, especially in the men’s wear category with shirts and blazers. The fair also showcased upgrades in laser technology, as well as newness in performance denim. The color palette for fall 2015 includes indigos, blacks, grays and winter or bone whites.

Weavers see opportunities in offering denim products to the sportswear players, not just denim brands, as could clearly be seen in the exhibits of two Turkish mill giants. Orta Anadolu displayed mannequins striking yoga poses in denim pants from its “Body Science” line while Isko presented its BlueJym collection, at the crossroads between denim and knitwear.

“Knit denim — lightweight, functional denim — is the denim industry’s response to the [challenge of the] yoga business,” said Neil Bell, global material fabric and fiber innovation director at Levi Strauss & Co. “The Nike Flyknit has inspired the move towards knit denim. We have always looked towards the [shoe] industry, but it is the first time it has influenced denim so clearly,” he explained. The automotive industry — especially 3-D weaving — is also inspiring trends, said Bell.

“There is definitely a push out there for what they call ‘cuddle’ fabrics, or ‘pajama’ fabrics — fabrics that are comfortable,” said Tiia Richardson, Marc by Marc Jacobs’ director of women’s denim, product development and production.

Michelle Don, senior denim designer for women’s wear at Tommy Hilfiger, agreed. “You have to put your own twist on [the activewear trend],” she said. “For Tommy, it means still preppy but modern and ‘denim-y.’”

Another core trend that Don sees is basics “or as they say ‘normcore.’ It is kind of being ironic, with fanny packs, etc. For silhouette, it is the high-waisted, slim, straight Eighties 501,” she said in reference to the Levi’s classic.

“There is a mix of different types of trends,” observed Hennes & Mauritz AB product developer Joakim Eriksson. “We cover most of them. It is not one collection [at H&M], it’s hundreds.”

“Most of what we do has a tremendous amount of Tencel,” said Kerry Jolna, president and chief executive officer of Los Angeles-based Bella Dahl, of the cellulosic fiber from Lenzing. “Everything that is in our line has to be soft. We do soft, relaxed bottoms — everything that isn’t five-pocket jeans — so our business is exploding.”

He said that wide-legged and zip bottoms and jogging pants, all in the $100 to $130 retail range, are “very strong because we are picking up a lot of business from the five-pocket jeans.” Jolna said the brand has hired a distributor to develop business in European department and specialty stores. “Countries that are doing well [economically] like Germany will be doing well [for us],” he asserted.

Bella Dahl is joining the bandwagon of U.S. premium denim brands looking to Europe as a land of opportunity.

The superpremium and premium segments in Europe are forecast to grow by 7.8 percent and 6.5 percent, respectively, in Western Europe in the five years through 2018, according to market research firm Euromonitor.

“The European consumer remains more progressive [towards premium denim],” said Levi’s Bell. The company remains a key player in Europe, ranking first with market shares of 14 percent and 22.5 percent in Western and Eastern Europe, respectively, according to Euromonitor.

Bell praised Cone Denim’s launch of Conetouch, a soft-hand performance denim made from recycled bottles. “It is a sustainable fiber that brings performance,” he said, adding he intended to place an order.

Bill Curtin, owner of the denim line Washhouse in New York, praised Soorty’s silver nanotechnology called Sanitized, with antimicrobial properties developed for students. “It is a cool idea for guys,” he said. “The upcharge with antimicrobial is around 15 or 20 cents [a yard]. It is not too expensive. You can absorb that cost.”

He also liked “the great open-end [yarn] looks like in the Eighties” at Isko, which has also updated its Reform XP line with authentic-looking denim products that have a high degree of elasticity.

“I tend to buy fabrics that don’t get sold and ultimately get dropped because they aren’t commercial enough,” said Glenn Mance, a design consultant to Robert Graham, which opened its first New York store on Bleecker Street last November. He liked the vintage woolen looks translated to denim by Cappio.

“The laser technology is starting to look more handcrafted and I like that,” Marc by Marc Jacobs’ Richardson said of Jeanologia’s “Truth & Light” exhibit at the fair, which placed vintage garments next to facsimiles created with laser technology. “I couldn’t tell which was the vintage garment, which one was the new one. It is brilliant, almost like an art form,” she said.

The next edition of Denim by Première Vision will be held in Barcelona on Nov. 19 and 20.

The visitor count at the relocated fair increased 45 percent versus May 2013, held in Paris, to 4,479, with attendance from North America rising 33 percent, from Germany 34 percent and from Spain 28 percent, according to show organizers. U.S. buyers included representatives from Gap Inc., Abercrombie & Fitch Co. and Levi Strauss & Co., while major Spanish players such as Inditex and Pepe Jeans also turned out.

Show director Chantal Malingrey-Perrin called the attendance “beyond our expectations. We made the right choice.”

With the move to Spain, companies have sent larger delegations to the fair. “It is a slightly cheaper city than Paris and it is easier to commute,” she explained. The show gathered 100 exhibitors, up 5 percent versus May 2013, with a total of 45,208 square feet versus 41,979 previously.