The contract is for multiple seasons. 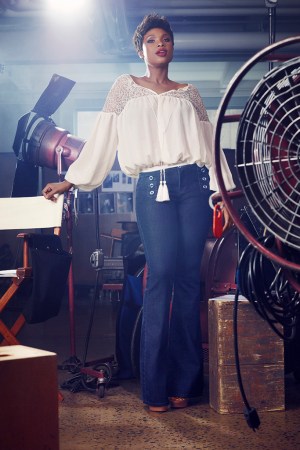 Jennifer Hudson is the new face of New York & Company’s Soho Jeans Collection. The actress, singer and philanthropist will appear in an in-store, print, digital and social marketing campaign wearing the New York-designed denim line inspired by a downtown vibe.

The latest edition of the Soho Jeans collection hits stores on July 22.

The campaign, photographed by Alexi Lubomirski, features the 33-year-old Hudson in some familiar work settings: a cobblestone set of a film, onstage with a microphone in hand, in a glamorous loft at the piano and seated in a director’s chair on a movie studio lot. Hudson models Soho Jeans’ Seventies-inspired fashion, ranging from high-waist flare sailor jeans and boyfriend styles to high-waist jean leggings and a boho fringed skirt. The Soho Jeans Collection retails for less than $70 and is available in sizes 0-18.

“What I love most about New York is the diversity. It’s a haven for individuality, and I have always found that to be inspiring. That sort of energy affects me all ways, but especially when it comes to style,” said Hudson, who praised the collection for being fashion-forward yet comfortable.

Cheryl Callan, chief marketing officer of New York & Co., views the Soho Jeans Collection as an increasingly significant part of the business.  “We launched the Soho Jeans brand about a year ago. It’s becoming a really important part of our business. And we really wanted to take it to the next level. We felt like a partnership was a way of doing that, and we felt that Jennifer was a natural ambassador for us,” said Callan, who worked with Hudson at previous jobs and knows her well.

The contract is for multiple seasons. Callan declined to reveal the length of the contract and the fall budget, but said the marketing will have “a significantly increased effort.”

Callan believes New York & Co. customers will relate to Hudson’s authenticity. “We think she’s going to help inspire our customers to come into the store and also to bring new people in who maybe aren’t familiar with New York & Co. They like Jennifer Hudson and she has a huge following,” said Callan.  Through research, Callan has found that their customers find Hudson’s personal journey and success inspiring. “Because she’s such an authentic and real person, we all know her story, and she’s so likable, she felt like a great fit for us,” she said.

While Hudson didn’t have any input in design for Soho Jeans Collection, she was involved in choosing which pieces she was going to wear and the aesthetic of the campaign. The collection was shot in New York.  The ads will appear in magazines, social channels and store windows. “There will be a teaser before the big reveal next week,” she said.

The campaign will run in September magazines. “We’ll have our social initiatives, and she’ll be posting on her social platforms to encourage her fans to check out New York & Co.,” said Callan. Hudson will also be doing some personal appearances for the media. To celebrate the launch of the campaign, New York & Co. customers who purchase a pair of Soho Jeans will get an additional pair for free.

Last month, New York & Co. extended its contract with Eva Mendes through 2019, which first launched in September 2013. That deal was brokered by Creative Artist Agency. The actress, known for her body-conscious red carpet style, signed a multiyear agreement with the retailer that includes launching a sub-brand bearing her name and becoming the company’s ambassador, including featuring in advertising campaigns, making appearances for the brand and interfacing with consumers.