Jessica Simpson is another step closer to building her billion dollar brand. The deal with Jones is the 19th licensing partnership for the Simpson brand. 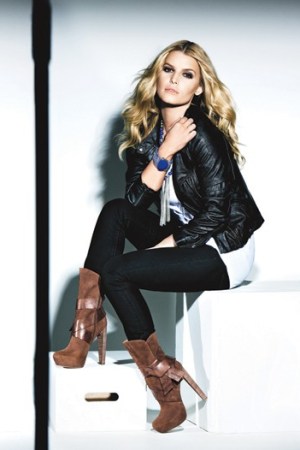 Jessica Simpson is another step closer to building her billion dollar brand.

The singer-actress and the Camuto Group, which holds the master license for Simpson’s brand, have signed a long-term licensing deal with Jones Apparel Group Inc. to develop, design, produce and distribute a full jeanswear collection under the Jessica Simpson name. The collection, which includes denim jeans, knit tops, jackets and skirts, will launch in about 1,000 department store doors in July.

The deal with Jones is the 19th licensing partnership for the Simpson brand. Camuto produces her footwear and there is an extensive range of other products including handbags, jewelry, fashion accessories, fragrance, swimwear, luggage, outerwear, dresses and, the most recent deal, intimates, which will launch at retail later this month.

This isn’t the first time Simpson has had a sportswear and jeans line bearing her name. In January 2005, the former master licensee, JS Brand Management (Camuto took over the master license later in 2005), signed a deal with Los Angeles-based Tarrant Apparel Group to launch a sportswear collection. But that agreement ended abruptly in 2006 with a lawsuit between Tarrant and Camuto. Tarrant claimed Simpson had failed to promote her product, but Camuto filed a counterclaim seeking over $100 million for the damages caused by alleged misconduct in breaching and abandoning Tarrant’s contractual obligations under the sublicense for Simpson’s sportswear line. The suit was settled in November 2007 when the parties resolved their litigation, and Tarrant gave up the license.

Now, with almost five years of experience building the Jessica Simpson label, the team at Camuto is confident Jones is the right choice for an apparel partnership. Vince Camuto, chief executive officer at Camuto, said the Jessica Simpson brand already brings in about $500 million at retail and, with the launch of apparel, he expects that number to climb rapidly.

“This license has been one of the toughest, but also one of the most important for our brand. It’s really all about finding the right partners and developing strategic partnerships,” he said. “When meeting with potential partners, and I met with a lot of them for this, I was overwhelmed with the expertise and passion at Jones. I see a lot more that we can do together.”

To develop the collection, Camuto worked with Jack Gross, group ceo of the jeanswear division for Jones. Gross said he was the first to contact Camuto about a year ago after doing his own research in stores.

“I was seeing the bags and shoes everywhere, so I would ask the sales staffs at the stores how the line performed,” he explained. “Every time I asked the answer was the same — it just does so well at retail, it’s amazing.”

Gross said once he began working with Camuto on the apparel, he was impressed with Simpson’s involvement in the creation of the collection.

“She has a very strong point of view and would be in here working long hours on this, sometimes up to 12 hours or so. I have to say, I didn’t really expect to see that,” he said.

Simpson herself said the design of the collection was especially important to her, since it had to reflect what she wears in her daily life.

“Because I live in denim, the fit was the most important,” she said. “A girl’s booty needs to look good. I was inspired to create a great denim line that complements the entire Jessica Simpson lifestyle brand — a jean that becomes a girl’s best friend, that everyday go-to pair.”

The line includes a variety of denim styles in a range of washes and treatment options. For the core, there are boot-cut, flare, skinny, straight, legging and jegging styles, all available in different premium denim fabrics and washes ­— from the basic dark denim legging to a lightly washed destructed flare. To work with the denim, there is also a collection of knit tops — from an asymmetrical tank with subtle lace ruffle detailing to an oversize fine knit cardigan and a chunky knit and fake fur vest. There also are jackets — a cropped Buffalo plaid jacket, boyfriend blazer or a denim motorcycle style — and even a range of skirts, such as a printed layered chiffon mini. The collection is designed for easy layering with delicate details found throughout such as a hook-and-eye closure at a leg opening of a pair of jeans or a metal chain on the neckline of a tissue-thin T-shirt.

In addition to the product design, the team at Jones worked on new packaging for the brand — hangtags with the Jessica Simpson logo and what appears to be three photo-booth-like photos of Simpson in black-and-white. The knits also have Simpson’s monogram stamped inside them, rather than having a traditional tag. Also, the jeans are all stamped with a subtle monogram at the corner of a rear pocket. In order to maintain consistency throughout the brand, this new packaging will soon appear on all Jessica Simpson merchandise across the licensed categories.

For the launch, the collection is set to roll out to about 1,000 department store doors including Macy’s, Bon-Ton, Belk and Dillard’s. Gross said about 40 to 50 percent of those doors will have designated Jessica Simpson shop-in-shops within their junior departments. He said Jones is positioning the collection as a better junior brand, competing with labels such as DKNY Jeans and Guess. However, items within the Jessica Simpson collection will retail for less than their competition, with wholesale prices ranging between $9 for a tank top to about $27 for a jacket or a chunky knit sweater.

On the marketing front, the company is planning a full range of in-store personal appearances for Simpson timed with the launch and the back-to-school shopping season. While the celebrity weeklies seem more interested in Simpson’s love life than anything else, the goal for Simpson in the coming year is to become known more for her charitable side, which Camuto said is sure to only help the brand at retail. Simpson is scheduled to appear on “The Oprah Winfrey Show” on Feb. 24 to reveal the creation of Beautiful Me, a mentoring program she is launching on a mission dedicated to building self-esteem in young women. In addition, she is active in several charities to help troops fighting abroad and their families, and Jones plans to launch a jean within the collection where a percentage of sales will go to the Armed Forces Children’s Education Fund.

While many celebrity brands have recently faltered — JLO by Jennifer Lopez pulled out of apparel in the U.S.; Eve has made several attempts at relaunching her Fetish label, and Paris Hilton’s apparel ended last year after a short run at retail — Simpson’s brand is clearly one of the more successful celebrity-backed lines in stores. Camuto said the success of this brand has been based on quality product that offers the customer good value, but also that Simpson, who is the face of the label, is looked up to by many for her fashion choices.

“What I liked about Jessica is that she comes across as approachable and not too edgy, which allows for the collection to translate to a broader customer base,” Gross said. “It’s because of this — and the value that the collection provides — that retailers have been very open to this collection.”