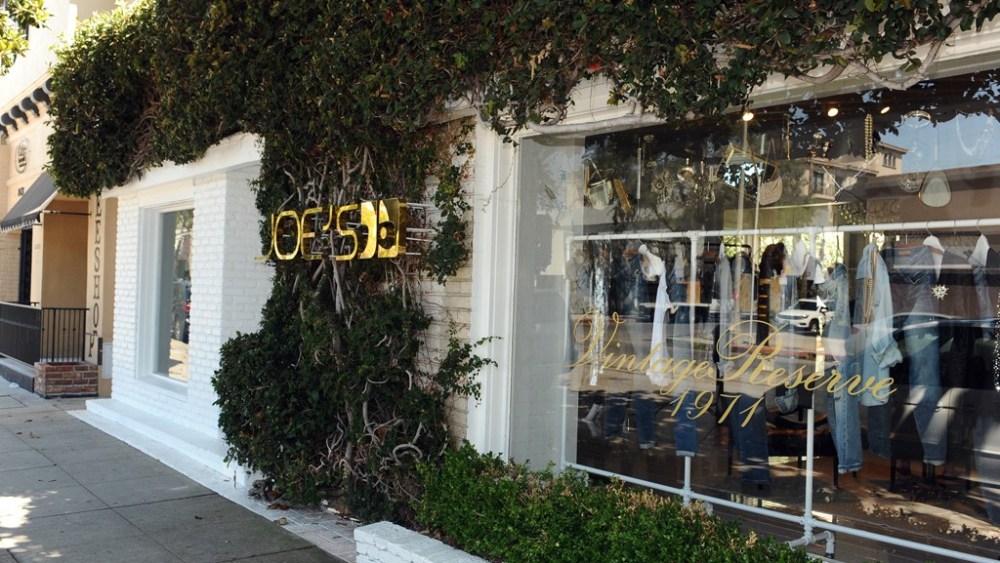 LOS ANGELES — Joe’s Jeans has finally planted a flagship in its backyard.

After opening its first flagship in Manhattan’s SoHo last year, the 11-year-old Commerce, Calif.-based denim company Thursday unveiled a 2,700-square-foot flagship on Melrose Place here, where its neighbors are Marc Jacobs, Carolina Herrera, Zero + Maria Cornejo and Oscar de la Renta. The new store, which is among seven planned for this year, is part of a push by Joe’s to increase the contribution of retail to its overall business from 20 percent to 50 percent over the next four years.

“We should have done it two years ago. We should have done it 10 years ago. We couldn’t figure out where to open. We didn’t want to do Robertson. We didn’t want to do Melrose [Avenue],” said Joe Dahan, founder and creative director of Joe’s Jeans. “We are looking for the customer that’s a hipper customer, not a tourist. We wanted to exhibit the collection to a more affluent fashion person.”

Although Joe’s is going to be joined soon by Isabel Marant on Melrose Place, the street has largely fallen out of favor due to poor foot traffic. Dahan isn’t worried, though. He was drawn to the intimate retail architecture Melrose Place offers and believes that Joe’s will be a draw for shoppers. “We will become a destination,” he said. He continued that, because the store is close to his house, “It’s kind of like a lab for me. I can hang out and get a feel for what the customer likes.”

The store’s design capitalizes on the homey feel of its cottagelike space. Chairs, sofas and tables are arranged in living room configurations at the entrance and by the dressing rooms. French doors open to an outside garden environment at the side of the store. Vintage tables display merchandise, including an array of jeans in 21 shades (Dahan singled out coral as the most popular one at the moment,) throughout the store. White is the predominant color covering the walls, ceiling and facade.

In a front window, Joe’s Jeans has placed its biggest fall launch, Vintage Reserve 1971. Inspired by a stash of jeans from 1971 that Dahan stumbled upon, Vintage Reserve 1971 kicked off with six styles priced from $165 to $169 — another eight will arrive for holiday — with light washes and distressing reminiscent of Seventies looks, but updated with skinny silhouettes. A jewelry heist-themed 30-second spot featuring the jeans will run in New York taxis starting on Fashion’s Night Out on Sept. 6. Ad images are also in the September issues of Elle, Vogue, InStyle and C Magazine.

Dahan and Joe’s Jeans president and chief executive officer Marc Crossman emphasized that stores are showcases for the brand’s nondenim as well as its denim pieces. “Everybody knows us for jeans only, so they are very shocked when they walk in,” said Dahan, who singled out sequined jackets, linen knits and embellished dresses as brisk nondenim sellers. “We merchandise it almost like a multibrand boutique. We make it easy for a consumer to go through a rack to get dressed.”

At its stores, nondenim sales, which constitute only 5 percent of wholesale, amount to as much as 40 percent of Joe’s take. “By having stores, we will be controlling our own destiny. In big-box stores, it is all about narrowing, and we are about expanding our selection. We are not pigeonholed [with retail,]” said Crossman.

The Melrose Place flagship is Joe’s 25th store, and Crossman said the company’s goal is to reach 100 by 2016. Joe’s expects next year to match its store expansion this year with about seven stores. The company would open more if it weren’t so picky selecting retail real estate. “We have the approval to open 12 stores a year at full price, but we can’t find the spaces,” said Dahan. Currently, Joe’s SoHo location is its top performer, although the unit at the Aventura Mall in Aventura, Fla., isn’t far behind. Nearly 70 percent of Joe’s Jeans stores are outlets, but Crossman is working to realign the retail portfolio with the objective of making 70 percent full-priced.

For the second quarter ended May 31, net sales from Joe’s Jeans’ retail segment rose 26 percent to $5.7 million, driven by a 10 percent gain in same-store sales. Gross margins for the segment climbed to 71 percent from 65 percent in the same quarter last year. Retail operating income was $570,000, up from $143,000 a year ago.