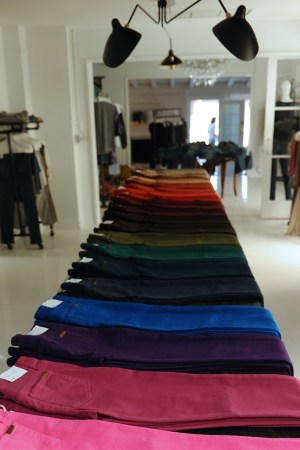 A vigorously promotional holiday kept Joe’s Jeans Inc.’s first-quarter sales below expectations while doing less damage to the bottom line than had been anticipated.

Eliminating the one-time charge of $8.7 million associated with the company’s payment to creative director Joe Dahan to replace his earn-out allowance, Joe’s Jeans would have reported net income of $1.7 million, or 3 cents a share, 1 cent better than the 2 cents forecast, on average, by analysts.

Revenues grew 13.4 percent to $29.4 million from $26 million in the first quarter of 2012 but fell below the $31.7 million expected by analysts, contributing to a 6 percent sell-off of shares in first 60 minutes of after-hours trading. They ended the regular trading session at $1.85, down 4.6 percent.

Wholesale revenues were up 11 percent to $23.1 million while retail revenues grew 22.9 percent to $6.3 million, helped by the addition of eight stores but hurt by a 1 percent drop in same-store sales.

Marc Crossman, president and chief executive officer, noted that winter storms, the delay until the second quarter of the opening of the company’s store in Tysons Galleria, outside of Washington, and “tough promotional activity from our peers from December through February” led to a decline in retail gross margin to 64.4 percent of sales from 69.5 percent in the prior-year quarter.

“That said, in this current [second] quarter our same-store sales are up and our gross margin has rebounded,” he added. “We continue to target opening 10 new full-price stores in 2013 with smaller footprints in top locations. Our recently opened store in Tysons Galleria is a good example. At just 1,000 square feet, it is our fourth-best performing full-price store.”

At the end of the quarter, Joe’s operated 12 full-price and 19 outlet stores.

Joe’s said in January that Dahan, who is the firm’s largest shareholder, would receive $9.2 million stretched out over a 33-month period to replace allowances that were tied to gross profit. The entire expense tied to the payment was recorded in the first quarter, so subsequent quarters will only reflect interest expense resulting from Dahan’s payments in those periods.

Crossman reported that sales of the Else brand, sold exclusively through 314 Macy’s units, grew 29 percent to $1.9 million in sales during the quarter, when domestic women’s wholesale revenues were up 4 percent and those for men’s up 29 percent.

“Several of our largest retailers, most notably Nordstrom and Bloomingdale’s, are currently planning sequential door growth in the back half of 2013 due to our successful sales performance,” he told analysts late Monday.