Peter Kim will continue to serve as chief executive officer of Hudson and will join Joe’s board. 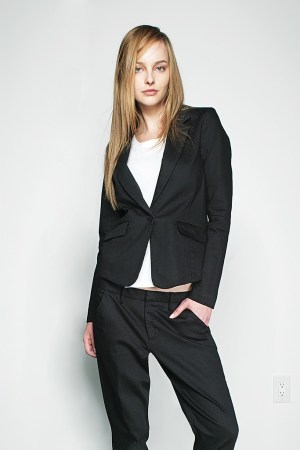 One of the most frequently rumored acquisition targets in the premium denim business came off the market Monday as Hudson Jeans reached an agreement to be acquired by its City of Commerce, Calif., neighbor Joe’s Jeans Inc.

This story first appeared in the July 16, 2013 issue of WWD. Subscribe Today.

Joe’s, which also reported lower profits on higher sales for the second quarter Monday, said it would buy privately held Hudson Clothing Holdings Inc. for $97.6 million in convertible notes and cash in a deal expected to close by Aug. 31.

Fireman Capital Partners and Webster Capital acquired a controlling interest in Hudson in 2009 and had been reported to be shopping the brand since late 2011. Webster and Peter Kim, who founded the brand in 2002, rolled their equity into Fireman prior to the deal with Joe’s.

Kim will continue to serve as chief executive officer of Hudson and will join Joe’s board. He will report to Marc Crossman, president and ceo of Joe’s.

Crossman emphasized that he isn’t looking to restructure Hudson’s business. “Peter has done a phenomenal job of building the company to what it is today,” he told WWD. “We’re going to keep our headquarters and staffs separate and really focus on maintaining the very distinct DNA of both of the brands.”

He expects substantial savings to come from the simple virtues of scale. “We’ll essentially be doubling the size of the company on the top line and with EBITDA, and we can realize some significant savings in the costs of fabric, trim and labor,” he said.

He noted during the company’s conference call late Monday, “Peter’s got a strong vision of where he wants the brand to be. We have no intention of mixing the two [brands] in any way, shape or form. We don’t want to change the growth trajectory of either.”

However, he does see significant advantages to what he termed “cross-education,” not only by, for example, opening up Hudson to Joe’s production assets in Mexico and balancing Hudson’s stronger distribution in better specialty stores with Joe’s more department store oriented business. Hudson’s retail roster includes more than 700 specialty stores.

In international, “I know that Hudson has done a fantastic job in Europe,” Crossman remarked. “We’re doing a good job in Europe. But then you look at Asia and France, and Hudson right now doesn’t have a Japanese distributor. And we will bring them into Japan and they will absolutely kill it,” he added.

Dan Fireman, managing partner of Fireman, said, “We are proud of our partnership with Hudson and all that we have achieved together.”

Fireman is the son of Paul Fireman, cofounder and chairman of the private equity firm and the founder and former ceo of Reebok. David Lipman, who’s directed several Hudson advertising campaigns, has also been an investor in Firemans’ firm.

In the quarter ended May 31, Joe’s net income contracted 17.3 percent to $1.2 million, or 2 cents a share, from $1.4 million, also 2 cents, in the year-ago period. Revenues expanded 7.8 percent to $30.9 million from $28.6 million, while gross margin fell to 43.7 percent of sales from 47.3 percent in the 2012 quarter. The margin erosion came as Joe’s mix shifted to its lower-priced Else brand, sold exclusively to Macy’s, and it bore the cost of producing its Vintage Reserve line in the U.S. Some of that production is being shifted to Mexico, Crossman told analysts.

Wholesale grew 6.2 percent, to $24.4 million from $22.9 million, as strength in its men’s business and growth in the Else business offset softness in women’s jeans, which continue to struggle in the wake of the peak of the colored trend that dominated a year ago. Retail sales were up 14.3 percent, to $6.5 million, despite a 6 percent decline in comparable sales in the quarter.

The two companies are not only based in the same neighborhood but reside in the same revenue territory as well, with Joe’s 2012 sales hitting $118.6 million and Hudson’s about $90 million. Joe’s has a stronger men’s business, and Hudson operates at generally higher price points and operates in the more rarefied air of the higher-end premium market.

“The acquisition by Joe’s Jeans gives Joe’s an opportunity to get better leverage on their operations as they spread their costs between the two brands,” said Richard Kestenbaum, partner at investment banking firm Triangle Capital. “Hudson is a great brand. It has real brand equity and a true following. It has a unique identity in the market.”

The transaction, he said, is further evidence that “the premium denim market is consolidating.”

The deal faces a number of hurdles, including a provision in which it would be terminated if at least $80 million in financing isn’t obtained by the end of August. The interest-bearing notes are convertible into 19.1 million shares of common stock, although stockholder approval would be required for conversions in excess of 13.5 million shares. Shareholders representing about 23 percent of Joe’s shares have agreed to vote in favor of the company issuing the maximum number of shares upon conversion of the notes.