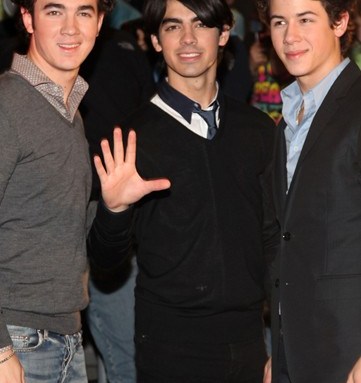 Loyal fans of wildly popular musical pop trio the Jonas Brothers can already listen to their three top-selling albums; read their recently released book, “Burning Up,” and even see them in 3-D at the movie theater in “Jonas Brothers: The 3D Concert Experience.” Now, coming this fall, tween girl fans can also dress the lifestyle.

Thanks to Disney Consumer Products, the Jonas Brothers franchise (based on Kevin, 21, Joe, 19, and Nick, 16) will soon include a full sportswear line for tweens, hitting mass retailers such as Wal-Mart, Kmart, Sears and J.C. Penney in time for back-to-school shopping.

“We see this line as high opportunity for back-to-school,” said Pamela Lifford, executive vice president, Global Fashion & Home, Disney Consumer Products. “Also, as an added element, within each of the retailers we are offering up differentiation, so that each store has exclusive product on their floors.”

The apparel collection, called Jonas, will follow the launch of the Disney Channel’s highly anticipated “Jonas” TV show, which is set to begin airing in May. On “Jonas,” the boys play the fictional New Jersey-based Kevin, Joe and Nick Lucas — a trio of teenage brothers who make up the world’s most popular rock band, Jonas (which happens to be the name of the street they live on in the show). On the show, the Lucas brothers do their best to live regular lives, but always seem to find themselves in the middle of some absurd situations. The comedy is set at the Lucas home, and at their private school, Horace Mantis Academy (a play on the well-known Riverdale, N.Y.- based private Horace Mann School).

Another major character on the show is the Lucas’ stylist-in-training, childhood friend Stella Malone, who not only keeps the brothers grounded, but also helps them out on the fashion front.

The Jonas tween apparel collection is inspired by the preppy clothing seen on the show, and nearly all of it is not character driven — there are argyle sweater vests with the Horace Mantis Academy logo on the front; woven tops; T-shirts; polo shirts with ruffle accents on the neck and sleeves; plaid belted shorts; leggings; denim skirts, and jeans. The collection will retail from $9.99 to $24.99. The more than 200 Disney Stores around the country will carry a separate collection of Jonas Brothers T-shirts, which will have graphics of the three brothers on them.

“A Jonas Brothers clothing line is a really great idea,” said Jane Buckingham, president of the Intelligence Group, a market research firm with offices in Los Angeles and New York. “These days it’s all about lifestyle and celebrity — girls especially want to see the stars they love in all different aspects, and I certainly think they will buy into a clothing line from them.”

Buckingham said that in a similar way adults enjoy reading about celebrities in US Weekly or People, kids want to connect with their favorite stars by wearing their jeans.

“Tweens are the right market for them,” she said of the Jonas collection. “Even though they typically go for more of that girl-to-girl connection, I am sure the company will be smart about how they market the brand, and I would think that the line wouldn’t be too masculine.”

Lifford admitted the brothers aren’t involved with the design of the product since the clothing is based on the characters they play on the show, not on their real day-to-day lives. Because they are on tour, none of the Jonas Brothers was available for comment. Lifford said Disney is planning major in-store promotions for the launch season and will work to support each of the retailers’ needs.

While the Jonas Brothers have generated millions of dollars since they first hit the scene a few years ago by selling out concert venues, making movies, CDs, TV shows and writing a book, some have speculated the trio’s popularity could be headed south. “Jonas Brothers: The 3D Concert Experience,” released last month, raked in only $12.7 million in its first weekend at the box office. The entertainment industry has called it a major disappointment as it was expected to bring in as much as $40 million on opening weekend following the brothers’ recent sold-out tour. The soundtrack sold under 50,000 copies and, to make matters worse, the film ranks as one of the worst movies of all time in Internet Movie Database’s ongoing readers’ poll.

But parents of the band’s tween fans love the boys’ squeaky clean image, which could compel them to spend money on the new apparel line for b-t-s. And while their latest film may have been a disappointment, they remain massively popular. Late last year, the Jonas Brothers became the first musical act in history to occupy three spots in the Billboard Top 10 album chart in a single week. Also, after the successful Disney film “Camp Rock,” a sequel is said to be in development. In it, the Jonas Brothers are expected to return as the band Connect Three, and their youngest brother, eight-year-old Frankie, is also slated to make an appearance. Filming is expected to begin this summer.

The $40 billion Disney also has plenty of experience developing and marketing tween-friendly merchandise. It all started with “Lizzy Maguire,” which aired from 2001 to 2004 and catapulted Hilary Duff to stardom. That show was followed in 2003 by “That’s So Raven” (starring Raven-Symoné), “Kim Possible” and “Hannah Montana,” which continues to dominate the consumer products arena and has made Miley Cyrus a star.

Merchandise from “Hannah Montana” and “High School Musical,” another highly popular Disney franchise, raked in $2.7 billion in retail sales for 2008. Disney anticipates the Jonas enterprise will be equally, if not more, profitable for them.

“The difference we have with the Jonas Brothers is that we have three young men,” Lifford said. “And when you look at their customer following, we have the whole heartthrob play, which is a great thing for us to work with when we are talking about tween girls.”

And could a tween boys or young men’s line be not too far behind? At least for now, Lifford said, it’s girl’s only, but Buckingham believes there’s plenty of room for Jonas Brothers merchandise.

“The Jonas Brothers are a lifestyle, not just a boy band,” she said. “Their movie lets you into their world, and the clothing line is just another way to do that; it’s a way to get closer to them and their world.”