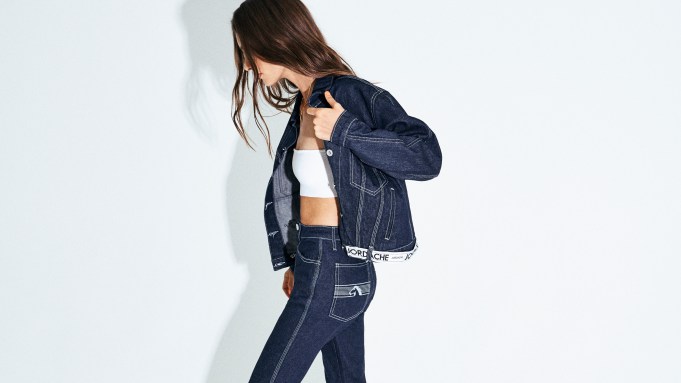 With Eighties logomania and premium denim both enjoying a renewed spotlight in fashion, the timing seemed right for Jordache, one of the original “designer jeans” brands, to reassert itself in the market. So to help celebrate the moment and its 40th anniversary, the company will unveil a premium denim line exclusively at Barneys New York and Kith the last week in October.

“Right now there is a desire, especially for Millennials, to bring heritage and vintage inspiration back,” said Liz Berlinger, Jordache president. “We realized the new trends using a lot of our design inspirations — our original launch collection had high-rise straight legs, oversize jackets, more rigid fabrics and darker washes with high-contrast stitching. Now was the time to bring it back.”

In order to bring the right design mix of old and new, Jordache tapped veteran denim designer Benjamin Talley Smith. “We really felt this project needed a fresh eye, so we took a totally different approach with someone who hasn’t been seeing it for the last 40 years,” said Berlinger.

Talley Smith has designed denim for Rag & Bone, Alexander Wang, Helmut Lang and Re/Done Originals over the last 15 years, so he has an eye for what makes denim relevant in any given moment.

“Obviously, Jordache is an iconic and cool brand that’s been around since the late Seventies but we wanted to try and draw it into that premium area because we felt it was a new girl for them,” he said. The line, which is designed in New York and manufactured in Los Angeles, features a “vintage crop” jean as its main silhouette, as well as a high-rise, slim, straight-leg with contrast stitching and the horse head logo embroidered on the pocket. That was a staple in every Eighties wardrobe that’s been updated with vintage washes and a blue PVC back pocket.

There’s also a horse head logo jacquard jacket as well as a shrunken jean jacket and oversize duster. Also new is a 3M metallic fabric bonded to denim for the back half of some jean and jacket styles. “A logo that flashes well in photos will be great on celebrities like Bella Hadid,” he added.

As the collection progresses from holiday to spring 2019, there will be more colorful fabrics and even more played up use of the logo, as well as an oversize trench, sweatshirt and T-shirts.

While Barneys is the main wholesale partner for the U.S., Kith was also important because of its unique approach to the Millennial customer. Both have U.S. exclusives for a year, while the new line will also sell in Browns in the U.K. and Hudson’s Bay in Canada.

“We have done business through the last 40 years, but this new launch is geared toward the big cites. Jordache hasn’t been as deep in the metro areas,” noted Berlinger.