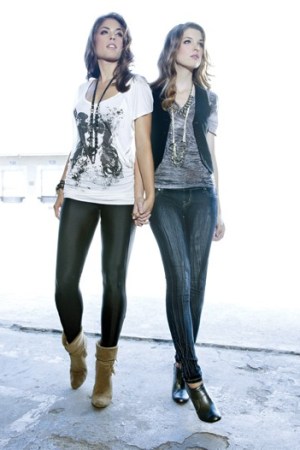 The competition has never been so fierce in the junior denim sector, as retailers continue to tighten their orders and manufacturers fight for floor space.

With that in mind, junior denim firms have begun to explore innovative new ways to attract their customers’ attention through added value, sharp pricing, expanded product categories, fresh marketing tactics and even some new brand names.

“The competition in this market is the fiercest I’ve ever seen,” said Deke Jamieson, executive vice president of licensing at YMI Jeanswear. “Retailers are buying less and reducing the number of brands they sell on the floor. It just no longer cuts it to be as good as the rest. You have to be better, a standout.”

Jamieson has begun an aggressive licensing plan for YMI that will expand the brand’s reach into new product categories. Recently, YMI’s licensed activewear, tops and dresses hit retail floors for the first time. This, Jamieson said, has helped business tremendously.

“Licensing just gives the brand more presence and has opened us up to selling new shops where we weren’t before,” he said. “It’s all a part of really focusing in on targeting and getting closer to our consumers.”

Jamieson said he is in negotiations to license handbags and footwear, which he sees opening even more doors at the retail level. In addition, on a marketing level, Jamieson said the company is testing a program that reaches these customers in their schools. While he wouldn’t go into details, he said it’s all part of the brand’s plan to reach these customers where they spend their time.

“We have increased our presence both online and off, especially since we know that our customers are spending so much more time online,” he said. “And on a product front, innovation is key. We all need to step it up in order to keep these girls interested. It’s important for us to believe in our brand, but if the product doesn’t fulfill, you have nothing.”

For Caren Lettiere, division head of Kellwood Co.’s Jolt brand, the most important thing today is to have a diverse portfolio.

“Because the entire retail landscape has changed and there’s not as many stores out there, it’s important to be able to serve all types of distribution,” she said.

At Jolt, Lettiere said the brand is able to serve retailers with denim and nondenim bottoms, as well as casual coats and jackets. In addition, the firm has the ability to produce quickly on the trends. On a marketing front, Lettiere said marketing has been stepped up. After a strong response to its fall ad campaign, the company plans to move forward through reaching customers on Facebook and Twitter, as well as on joltstyle.com, which launched earlier this year. Now on the site, the company is holding an Every Pair Has a Story promotion that encourages consumers to tell their stories about their favorite pair of Jolt jeans. In return, the winning writers will receive iPods or joltstyle.com shopping sprees.

“Our consumers have been writing in and telling us about their favorite pair,” she said. “They are led to the site through Facebook and Twitter. It just shows you the power of social media.”

Lettiere said it’s things like this that have helped the brand get closer to the customer to find out exactly what she looks for from Jolt. In turn, it has helped the brand to have a stronger identity at retail.

“The key is that we have to be able to keep reinvesting in ourselves in order to stay connected with the consumer,” she said. “We have to make sure that we are servicing her needs and evolving and growing with her, and hopefully leading her so that we can anticipate what she will want next.”

On the back end, Lettiere said she has been working extra hard to change relationships with factories and with retailers.

“The customer isn’t willing to spend more, but she wants more for her money,” she said. “So in order to tighten the lead time and offer the most value, many of our factory partnerships have changed.”

While much of Jolt’s manufacturing is done in China, Lettiere said the firm has begun sourcing in Vietnam and Guatemala in order to improve production.

Alden Halpern, president of the Tyte brand, said he has also been working out special deals with his factories.

“I’m definitely working on less profits, but there’s really nothing I can do about that,” he said. “I have had a lot of meetings with my Chinese factories, and we communicate with them about what’s been happening at retail. I assure them that they will be kept busy, and I am investing in their future, but they have to be able to work out deals.”

As a result, Halpern said, he has produced a better product with more detail, trims and better fabrics, but has also been able to lower his prices by about 8 percent.

“The key is to not hurt the retailer,” he said. “You have to deliver them more, but for less money. That’s just it — we have to deal with that.”

With that said, Halpern said his business has been good overall, and for back-to-school 2010, he will launch a higher-end junior brand called Byzantine.

“It will be for that Guess customer, but retailing between $39 and $59 — not as high as Guess,” he said. “There are girls out there who like the Guess look but can’t afford it. This line will be about great quality and great design. Guess is the best jeansmaker in the world, so this is sort of like my tribute to them.”

Mark Levy, president of Vanilla Star, said innovation and strong marketing plans are key elements for growth. Coming up, Levy said he will introduce a new jeans style that will sell as a raw-denim style packaged with sandpaper so the customer can customize the jeans and destruct them as much as they like. In addition, he has adjusted sourcing so it’s not just in China anymore, but in Pakistan and Bangladesh, which allows him to introduce new products without raising the prices of the product, as well as to increase the speed to market.

“I’m finding that stores are buying super close to their needs, and in order to be in this, we have to provide for them,” he said.

On a marketing front, Levy has collaborated with a group of New York-based young consumers working on designing a collection for Vanilla Star. Once the designs are complete, they will be judged, and the winning designs will be sold to stores.

“It’s a great thing because these will be clothes designed by the junior customers themselves, with their own point of view,” he said.

Peter Kossoy, president of Younique, said in order to expand his business, he launched a brand called Almost Famous at retail about six months ago. The trend-driven denim brand wholesales from $12 to $15 and sells at such stores as Wet Seal, Macy’s and J.C. Penney.

“It’s doing really well at the retail level,” Kossoy said. “Going forward, we are really expanding it and putting a lot behind it — we are in the process of designing the Web site for the brand, social media is beginning and we are planning on recruiting customers as brand ambassadors.”

Kossoy said the key for Almost Famous has been to provide a line that can ship quickly to retailers with the quality and value customers demand today. Kossoy is also working on launching another label called Don’t You Dare, which is denim- and knit-based, but at a higher price point, retailing around $48. That label should be ready for back-to-school 2010.

Overall, Halpern stressed that in the junior denim sector, value is most important.

“The key in this business right now is to make sure that no matter what, there is value attached,” he added. “The product has to look like its worth a lot more money than it is. People are spending a lot less, but more than ever, they want to feel good about what they buy.”