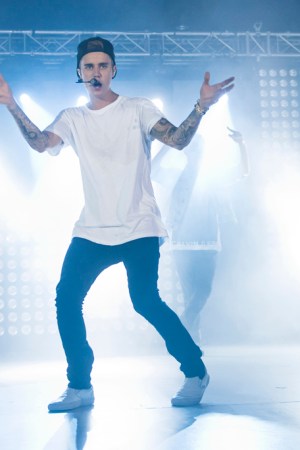 The singer and underwear model was joined by Korean pop star Jay Park, who opened the night with a swagger-fueled set, as well as fellow Calvin Klein face Kendall Jenner.

Earlier in the night, Bieber was greeted by a horde of youngsters waiting outside the Landmark Mandarin Oriental hotel where he was staying. A few dozen extra-dedicated fans also waited outside the party chanting his name, though they weren’t completely left out. Calvin Klein live-streamed the event across social media for fans around the world.

The affair was yet another celebrity musician and fashion brand shindig Hong Kong has played host to in recent months. Last month, men’s wear brand Ports 1961 invited rapper Big Sean, dancer-choreographer duo Les Twins and singer Elle King to perform at the opening of its Canton Road flagship and, in November, Lorde sang at the Pradasphere exhibition launch.

“We’re not just designers, we’re in entertainment,” Calvin Klein global creative head Kevin Carrigan said. “We understand when there’s a moment that you want to seize and blow up.”

Chai Yan Leung, the scandal-prone daughter of the Hong Kong chief executive officer, was sharing her moments at the party on social media, making a beeline for Jenner.

“I told Kendall, ‘You take the perfect selfies!’” Leung said. “I love Kendall Jenner. I love Kim Kardashian and the music is absolutely sick tonight. ”

Carrigan may have preferred not to amplify the divalike moments Bieber had on stage, though.

“Don’t f***k with my levels,” the singer sniped at a sound producer in the middle of a song.

He later told photographers to put their cameras away, saying he was jet-lagged. “It’s annoying,” Bieber told the crowd.