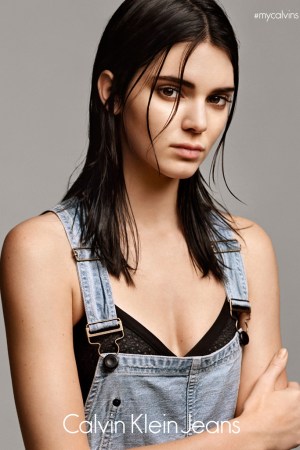 Kendall Jenner, the 19-year-old model of the moment and social media darling, will appear in a new ad campaign for Calvin Klein’s #mycalvins Denim Series, a limited-edition, logo-driven offering inspired by athletic and urban streetwear.

In North America, the line will be introduced at Opening Ceremony’s New York and Los Angeles stores on April 15, as well as online at openingceremony.com. Distribution will then be expanded to calvinklein.com on May 15.

This story first appeared in the March 27, 2015 issue of WWD. Subscribe Today.

The global image campaign, photographed by Alasdair McLellan and styled by Melanie Ward in New York City, will also feature male model Simon Nessman. The ads will have a combination of print, outdoor and digital components. The campaign was produced under the creative direction of Calvin Klein Inc.’s in-house ad agency and creative studio.

“Honestly, it has been my dream to be able to do something like that,” said Jenner in an interview. “Calvin Klein’s ad campaigns have always been so memorable.”

Jenner is happy to follow in the footsteps of other models who have appeared in Calvin Klein ads.

“Being a Calvin Klein model is something that I’ve always dreamed of and it’s incredible to follow such major models like Kate Moss, Christy Turlington and Lara Stone,” she said.

Describing the set in New York, Jenner said, “It was actually a pretty cool studio. I love rain, and it was raining outside and had a cool vibe.” She said she wore a jeans vest, “cool T-shirts” and cropped tops during the shoot.

“I’ve always wanted to be a model ever since I was a kid,” said Jenner. She said she graduated from high school a little over a year ago “and left my options open.” She just completed a busy fashion month. “I did a lot of runway. It was exhausting. I was in four cities and walked a lot of shows,” she said.

Asked about her personal style, Jenner said, “I’m still 19, so I feel like my style is still developing. I find myself wearing jeans and T-shirts and leather jackets most often. I find style inspiration just traveling around the world and being in New York, London, Paris and seeing all of these different places and people with such cool style and edge. I think that I pick up a lot from just traveling.”

Jenner said she enjoyed appearing in the earlier #mycalvins social media campaign, where she posted a selfie of herself wearing Calvin Klein underwear.

“I’ve been a fan of Calvin Klein, so to be a part of that campaign was really awesome. The underwear is amazing. Honestly, I wear it every night to sleep and I wear it every day, so it was a natural thing for me. It’s funny because my agent asked me, ‘why did you post that?’ and I said ‘because I’m actually wearing it and I actually love it and I wanted to post it.’”

As for the latest jeans line, Calvin Klein Jeans and Opening Ceremony will jointly host an invitation-only launch event on April 23 in Los Angeles.

The global print and digital advertising campaign will break in May and will be supported by paid social media. The first billboard in the U.S. will go up in early April in Los Angeles, outside of Opening Ceremony. Additional billboards will follow beginning April 15 in Los Angeles (on Sunset and Havenhurst) and in New York (on Houston and Lafayette), followed by additional outdoor sites in Europe.

Meantime, after upgrading its denim line, revamping its product distribution and closing stores that no longer met expectations, Calvin Klein Jeans has recently delivered new product, and the company is seeing a good reaction from the consumer, particularly where they have installed new Calvin Klein Jeans shops, according to Manny Chirico, chairman and chief executive officer of PVH Corp., parent company of Calvin Klein. In North America, Calvin Klein Jeans has installed 225 shops in 2014 — 150 men’s shops and 75 women’s shops. In those newly installed shops, it has experienced a 40 percent retail sales increase over the prior year. For fall 2014, overall average unit retail was up 15 percent, driven more by men’s, and that trend has continued into the first quarter of 2015.

In Europe, the company is in the early stages of a turnaround of the Calvin Klein Jeans business. It has installed more than 60 new jeans shops throughout Europe and has improved the quality of its European jeans line with better fabrics, trims and packaging. “We are effectively out of all off-price retailers in Europe and have closed approximately 40 underperforming stores over the last 18 months. The jeans business in Europe is seeing improved sell-throughs and higher AUR’s in the first quarter of 2015 with growth across all European markets [except Russia],” Chirico said.

Jenner, who’s been modelling since she was 14, has really hit her stride in the past year. She was the most-tweeted-about model during fashion month, where she walked the runways in New York, London, Paris and Milan. Among the shows she appeared in were Chanel, Alexander Wang, Diane von Furstenberg, Donna Karan, Vera Wang, Michael Kors, Marc Jacobs, Oscar de la Renta, Fendi and Balmain. She also appears in spring campaigns for Marc Jacobs and Karl Lagerfeld and has an advertising deal with Estée Lauder.

The new limited-edition series, designed by Calvin Klein Jeans’ global creative director Kevin Carrigan, was influenced by the success of the #mycalvins social media campaign, in which Jenner participated, alongside other models, musicians, athletes, celebrities and influencers from around the globe. The campaign encouraged fans of the Calvin Klein brand to post selfies wearing Calvin Klein using #mycalvins. The campaign engaged hundreds of global digital influencers from more than 25 countries, reaching about 400 million fans and generating more than 13 million interactions worldwide.

The denim series is anchored with a modern cropped take on the “Calvin” logo. The women’s and men’s offering features Calvin Klein jeans, logo T-shirts, denim shorts and jackets, jogger sweatpants, unisex backpacks and hats, in baby blue, washed black and white rinses. The collection is priced to retail from $58 to $348 and will be offered for one season only.

“This series is an expression of the athletic trend that’s happening right now,” Carrigan said. “I designed an assortment of unisex Ts and tops to be mixed with denim in elevated street styles.”

Humberto Leon, founder of Opening Ceremony, added, “We grew up seeing Calvin Klein ads and wearing the jeans so it’s very exciting to be working closely with the brand on the launch of the new #mycalvins Denim Series. At Opening Ceremony, we want to bring the customers into our own story and introduce them to what matters to us, and this partnership represents that idea because Calvin Klein was always an important part of our youth.”