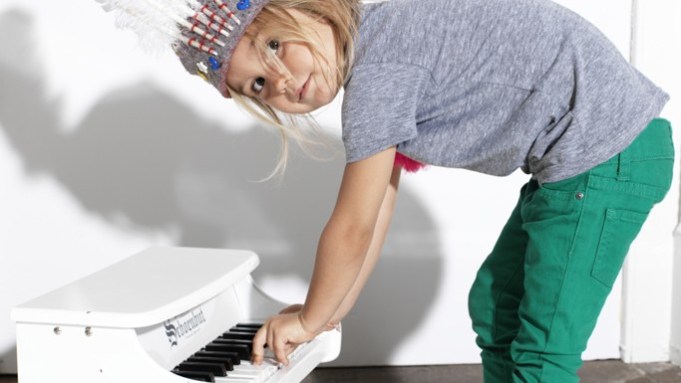 LOS ANGELES — The denim industry has gathered a new set of muses and they all stand under four feet tall.

With recognizable names such as Kingston and Suri, bolstered by celebrity clans like Rossdale-Stefani and Cruise-Holmes, the pint-sized celebrities are giving a boost to the $2.35 billion children’s denim business. Photographed wearing zippy jeans in eye-catching colors and patterns that sometimes match their stylish parents’ get-ups, the kids are helping transform denim into an aspirational product, even for pre-teens.

“Designer denim is the [fashion] equivalent of having an iPhone or a tablet in the electronic world,” said Jamie Gutfreund, chief strategy officer at the Intelligence Group, a Los Angeles-based trend research and forecasting firm owned by Creative Artists Agency.

Gutfreund noted that another factor elevating the category’s profile is the Internet, which allows young customers to tap into trends faster and research brands on Web services such as Pinterest, Instagram and Tumblr.

Indeed, in a February 2011 report on the tween market, the Intelligence Group found that 84 percent of tweens under 14 want more brands and stores for their age and 46 percent of tweens are researching products online before they go to a store. Moreover, 63 percent of parents are influenced by their kids’ choices for apparel.

Thanks to the kids’ sophistication and awareness, “the lines are blurring between what is adult fashion and what is tween fashion,” Gutfreund said.

For a number of denim companies, the kids’ business is no longer viewed as an afterthought.

After closing and repurposing its Lucky Brand Kids stores and ceasing altogether the manufacturing of children’s products in 2009, Lucky Brand re-entered the space late last year. Lucky, the Los Angeles-based division of New York’s Fifth & Pacific Cos. Inc., now identifies expanding the children’s business as one of its strategic priorities, along with developing the brand internationally. Its new course entailed forging a licensing deal with New York’s Parigi Group to manufacture and market kids’ clothing to department and specialty stores, starting in January. Next spring, Lucky plans to test kids’ shops-in-shop in 17 of its stores, including a location in Westfield Century City, that range in size from 200 to 500 square feet. If those shops-in-shop perform well, the company is considering opening a freestanding kids’ store at the end of next year. Lucky is also planning to launch a kids’ catalogue next fall. In the most recent quarter, Lucky’s sales rose 11 percent to $112 million while comparable direct-to-consumer sales, including its more than 200 stores and e-commerce operations, were up 5 percent.

In the children’s jeans market, the premium denim category is booming. Jeans retailing for between $50 and $74.99 surged 16 percent to $3 million in the 12 months ended August, according to The NPD Group, a market research firm based in Port Washington, N.Y. In comparison, sales for jeans priced less than $25 fell 2 percent to $2.13 billion, and those for jeans costing $25 to $49.99 grew 22 percent to $214.3 million.

Total sales for children’s jeans fell 1 percent to $2.35 billion from $2.36 billion a year ago as business at department stores, national chains, mass merchants, off-price retailers, factory outlets and warehouse clubs slumped, said NPD. Yet sales of the jeans at specialty shops, direct mail and e-commerce services are on the rise. The Intelligence Group noted that due to the recession, 89 percent of parents are spending less money on themselves so they can spend more on their children.

Hudson Jeans has dabbled in the kids’ space by making special cuts of children’s products for a philanthropic event called Kidstock. While the City of Commerce, Calif.-based company is discussing moving into the kids’ market in the future, it doesn’t have a definitive timeline.

Like many designers who have kids, Chloe Lonsdale, founder of London-based MiH Jeans, is tempted to test the waters. “Now that I have three children, it’s tough for me to ignore my desire to branch out into kids’ wear,” she said. “The fact my kids live exclusively in vintage dungarees definitely means there’s a gap in the market for this type of product, but my rule for kids’ denim is that it must be both incredibly soft and comfortable but hard-wearing.”

Kids’ products are also on the radar for AG Adriano Goldschmied in South Gate, Calif. “We would love to dress kids in AG soon,” said AG creative director Sam Ku, “but we need to do proper research in this market before we begin.”

The kids’ business poses particular challenges. Because of the variations in sizes — starting at 12 months and running up to 24 months for infants, two to 14 for girls and two to 20 for boys — the number of stockkeeping units can be overwhelming. Thus, executives said the business lends itself to a licensing model, whereby the licensee can focus purely on kids’ clothing and offer a greater breadth of product.

Licensing seemed the best route for Seven For All Mankind to pursue following a period of designing and manufacturing kids’ clothing internally between 2005 and 2009. The Los Angeles-based division of VF Corp. partnered with New York’s Tawil Associates in 2010 to restart the kids’ business for fall 2011. Under the direction of Tawil, which also makes kids’ products for Buffalo Jeans and baby gear for Juicy Couture and Marimekko, the line has grown 30 percent from a year ago. Retailers include Bloomingdale’s, Neiman Marcus, Saks Fifth Avenue, Nordstrom, Bergdorf Goodman, Barneys New York and Fred Segal. With retail prices for jeans starting at $69, the line incorporates all of Seven’s washes and Tawil is in regular discussion with its client’s mills.

By working closely with the washhouses and mills, Tawil can shorten the time it takes to translate trends from the adult market to kids. For instance, the glitter dust that shimmered on women’s jeans this spring was used on a $109 girls’ skinny version this fall. Amy Pang, Tawil’s creative director for kids, even tracks trends on the runway, in contemporary and junior brands and through fashion blogs to give children a stylistic edge.

“It makes me better informed and then I can predict where the [kids’] line will head,” she said.

Jennifer Liquori, account manager at Tawil, expects to see more competition in children’s. “There’s not as much premium denim competition as there could be,” she said.

For Joe’s Jeans, which works with licensee Ever Blue LLC, operated by Albert Dahan, the brother of Joe’s Jeans founder Joe Dahan, the kids’ business is also about strengthening the emotional connection with the female customer.

Such emotions have currency. In the last four years, Joe’s Kids has more than doubled in size to make up 10 to 15 percent of total sales. Retail prices for kids’ products range between $49.99 and $79.99. While back-to-school contributes to half of the sales in the overall kids’ business, the holiday season comprises 30 percent and spring constitutes the remainder. In the three months ended Aug. 31, Joe’s reported net income of $1.4 million, reversing a net loss of $2 million in the year-ago period, as sales grew 25.5 percent to $30.3 million from $24.2 million a year ago.

Joe’s, like other denim companies, can only benefit from the natural growth spurts that kids undergo.

“They grow out of the clothes certainly faster than the clothes wear out,” Crossman said. “When the mom comes into buy something for herself and her kid, she’s not going to buy last season’s goods for her child.”