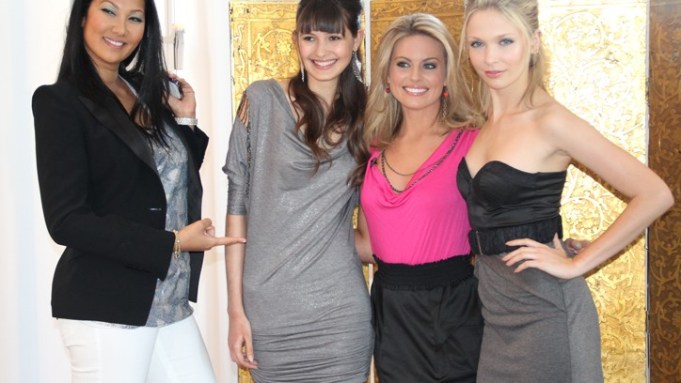 Kimora Lee Simmons is adding Kouture to her design portfolio. It’s not the kind found on the Paris runways, or in the dictionary, for that matter. Not that grammar has ever applied in Kimora’s kingdom, high above Seventh Avenue on the 43rd floor, where the service stops just short of lifting her sedan chair-style when she wants to scoot closer to her interviewer. “No! You can’t lift me!” says Simmons, laughing like a teenager. “I told you about acting like that in front of people! They’re going to think I make you lift me!”

Once she’s perched in her preferred position, Simmons is ready to talk about Kouture by Kimora, her latest junior collection, launched in an exclusive deal with Macy’s earlier this month. “It’s very trendy, it’s very young and it’s very fun,” says Simmons of the line, which is priced from $19.99 to $34.99 at retail.

If that sounds similar to her other ventures — specifically Baby Phat and Fabulosity, the junior collection she does for J.C. Penney, Simmons said the difference is that Kouture is completely trend driven, rather than urban and streetwear related. Key items include rompers, blazers and studded leather jackets. And there’s the Macy’s angle, of course. Phat Farm has been with Macy’s for years, but Kouture is the first line Simmons has developed exclusively for the retailer, a process that was documented on her Style network reality show “Kimora: Life in the Fab Lane.”

“I wanted to do something that spoke to a different market for Macy’s,” says Simmons. “It sits in a different section. I wanted this to be crossover. I wanted this to be colorless and really about fashion. And it’s what I call recession proof. It’s really important to say that. You can get a cocktail dress with a bustier top and satin skirt for 30 bucks. You can get a great jean for $19.99.”

In the meantime, Simmons is focusing on “adding to my portfolio and cleaning up my licenses and seeing where to expand my business. I look at my life and my color palette of brand and products and really chose carefully where to place them, like a Kimora Lee Simmons Design Group,” she says, apparently coining a new title for her growing empire on a whim. “That’s a great term for the day.” Asked if it’s actually an official design group, Simmons glances at her team and says, “Yes, that’s my term. There. I said it in the microphone.”