Make it soft and comfy. Weaving is optional. That was the mantra at the third Amsterdam edition of Kingpins. 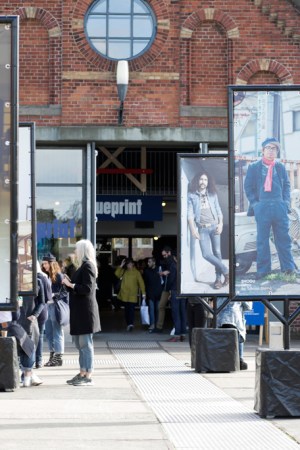 AMSTERDAM — Make it soft and comfy. Weaving is optional.

That was the mantra at the third Amsterdam edition of Kingpins, the invitation-only denim trade show presenting the latest in fabrics, treatments and machinery for retailers and wholesalers of jeans.

“Knit denim – it’s that simple,” said industry veteran Adriano Goldschmied, scouting trends at the premium fair. “It’s the new generation of denim – set between tradition and performance. I think they have what it takes to completely change the scenario of denim.”

Echoing other visitors’ observations, he noted that some of the most coveted fabrics were not even recognizable as denim anymore.

“The story is about comfort. Nobody wants to suffer anymore wearing denim,” he added, noting that the lifestyle change was the sector’s biggest challenge — and opportunity.

“The ath-leisure movement is taking ground away from denim, but this territory historically belongs to us. That’s why I say, ‘Don’t sleep, innovate,’” he argued.

There were 45 exhibitors at the show, which ended its three-day run at the Westergasfabriek here on April 17, and, in a 60 percent increase from the inaugural event a year ago, 1,050 visitors.

“A meeting here can last an hour,” Goldschmied said, singling out Invista’s Coolmax technology among the most interesting fibers.

“Performance fabrics are what people are looking for. Since 2013, the volume of denim fabrics developed with Coolmax and used in commercial garments has grown by more than 40 percent,” said Jean Hegedus, global director for denim and wovens at Invista.

For spring 2016, the company partnered with Lenzing, combining Coolmax’s moisture-wicking abilities with the soft hand of Lenzing’s fiber, making the product more suitable for women’s wear.

Spanish indigo knit specialist Unitin gave Tencel a new look with a series of fine knits. “Lightweight crossing over from sportswear is a big trend. It’s all related to comfort, stretch and recovery, while keeping the garment’s shapes,” said Michael Kininmonth, Lenzing’s project manager of apparel.

Selvedge remains in demand, he added. “But not as a trend. It’s a niche that has just gotten bigger,” he explained, also singling out “digital printing” as having a future. Pointing to a pair of jeans on which anything from the label to the studs was printed, creating a clin d’oeil effect, he said: “This is the end of the denim industry as we know it — no child labor, no bleaching, no sandblasting.”

Despite a wide range of novelty effects, Kininmonth remarked that the market for fiber producers like Lenzing was very difficult. “The sales in Tencel are up, but the prices have hit rock bottom. We are profitable but it’s all about the economy of scale. It’s hard to achieve any margins.”

He said the future of denim is with specialists like Unitin, which saw sales surge 15 to 20 percent year-on-year, also thanks to its “wise wash” technology which uses ozone instead of chemicals and water, but which has yet to find its way into mainstream.

Michael Abbey, director of men’s collections and women’s knits at J Brand, said he was on the hunt for “the new.”

“Men’s stretch is a big thing right now,” he confided, adding that he would buy into ath-leisure via Tencel blends, preferring light, comfortable fabrics.

The Japanese weaver’s booth was a busy one as buyers were eager to catch a glimpse of its water-repellent denim with a glossy coating resembling canvas as well as white and corkscrew selvedge — “something for bigger, more specialist brands,” explained Reiichiro Yoshida, Collect’s section chief, revealing a 30 percent jump in sales over the previous year.

Not everyone was smitten with the trend toward softer hybrids. Robin Westrin, denim buyer for Tiger of Sweden Jeans, expressed hope more rigid denim would make a comeback soon. “It’s more authentic and I would prefer it, but the consumer is not there yet,” he conceded.

Westrin singled out Cone’s fast-fading styles and pointed to I.T.V.’s knack for innovation, including its heavy, hand-painted coatings. “They are always fun and accurate,” he said, lauding Kingpins’ careful editing of its exhibitor roster. “At larger shows such as [Denim by Première Vision] you get a lot of variety, but you never know which of the stuff will work on a commercial level and become a trend, especially in the premium segment. Here, you get to pick the cherries.”

Cone, which celebrated the 110th anniversary of its White Oak Mill at Kingpins with a demonstration of its vintage selvedge, said texture was trending well. “We still use our looms from the Forties. They are not modern — they work via strings and rubber straps and stand on wooden rather than concrete floors — but that’s what gives real depth and dimension to the fabric,” explained Kara Nicholas, vice president of product development and marketing, noting that on the old looms the company could also produce stretch with “a selvedge edge.”

This season, the mill introduced Dyneema, an extra-strong fabric made from fibers taken from bulletproof vests. The product appealed to brands serving an active clientele such as skaters, who are keen on performance characteristics.

Candiani SpA, meanwhile, focused on its stretch selvedge and what it called “Swenim” (from sweat and denim), a superfine, high-performance fabric that looks like a knit but is actually woven denim.

“We invest 5 percent of our turnover every year into research and development,” said Alberto Candiani, global manager of the family business, adding that 40 percent of his business was done in the U.S., mostly in the Los Angeles area, which, with the strength of the U.S. dollar, will help the company’s profits.

“Last year was stable, this year we expect a slight pickup, but in 2016 we will take full advantage of the dollar. We export 90 percent of what we do, and the exchange rates are making us more competitive,” said Candiani.

Katrina Klein, denim designer at Rag & Bone in Los Angeles, deemed the show “very well curated” and also praised the broader Amsterdam Denim Days initiative, along with the Blueprint denim festival, where visitors could browse through a temporary denim concept store, check out a Japanese indigo workshop or have their jeans customized. Cinema and art exhibits centered on denim were also on the agenda.

Klein discovered a company offering laser bicycle seats made from denim. As funny as it sounds, she said, “this gives you ideas. And I loved Seven Senses, which offers 100 percent organic silk denim fabrics, leaving the silkworm unharmed. Overall, there are fabric vendors here we haven’t seen in L.A.”

Emily Bennett, lead fabric development manager at Target Corp., highlighted the educational elements. “We are very impressed, both with the show and the seminars, which are great this time. We come here to network within the community and get inspired,” she noted.